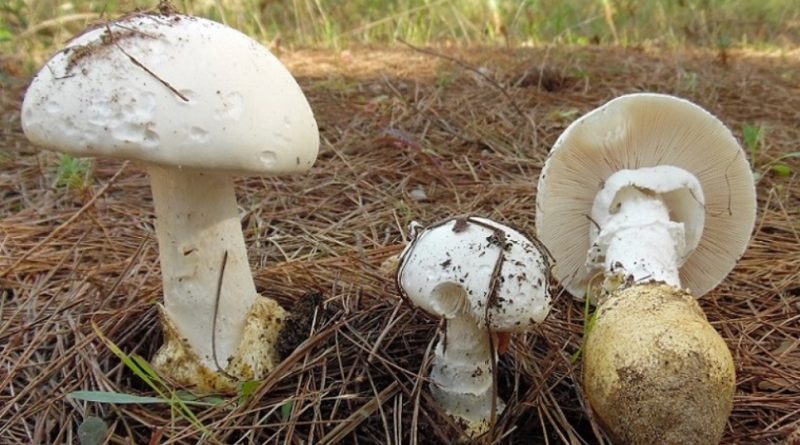 Systematics –
From the systematic point of view it belongs to the Eukaryota Domain, Fungi Kingdom, Basidiomycota Division, Agaricomycetes Class, Agaricales Order, Amanitaceae Family and therefore to the Genus Amanita and to the A. proxima Species.
The term is synonymous: Amanita ovoidea var. proxima (Dumée) Bon & Courtec ..

Etymology –
The term Amanita comes from the Greek ἀμᾱνῖται amanítai, a name given by the ancient Greeks to mushrooms from the mountain Ἄμᾱνoς Ámanos of Asian Turkey.
The specific epithet proxima comes from neighbor, very close: because it is very similar to other congener species.

Geographical Distribution and Habitat –
Amanita proxima is a symbiont fungus that grows on calcareous and sandy substrates of the Mediterranean maquis where there are broad-leaved and coniferous trees. It is a generally thermophilic mushroom that bears fruit in the autumn period on sandy and calcareous soil.

Recognition –
This Amanita is recognized for having a hat ranging from 5 to 10 cm in diameter, which appears first hemispherical and finally flattened.
The cuticle has a color that goes off-white to ivory; it is smooth, opaque, silky, with strips of gray-brownish veil and with the margin hanging cast.
The lamellas are 8-12 mm high, numerous, thin, free, with a white-cream color and with pink reflections.
The stem measures 6 -10 x 1–2 cm; it is cylindrical, thin, slender with a hinting rooting bulb, white in color that can sometimes have creamy white scaliness, then full and childish. It has a large semimembranosus ring with a striated upper face. This is persistent, membranous, broadly streaked with a creamy color with pink reflections.
The volva is buried and with the free edges, of variable color from ocher-orange to reddish.
The flesh is white and immutable and with an indefinite smell.
At the microscope, spores of 8-12 x 5-9 µm are noted, white in mass, elliptic, amyloid. Buckle joints absent.

Cultivation –
Fungo Toxico and therefore it is not cultivated.

Uses and Traditions –
The Amanita proxima is an easily confused mushroom with the Amanita ovoidea (farinaccio), with which it often grows in the same habitat in the Mediterranean-xerophilous environment.
However, it is distinguished by the presence of ocher volva and the evident and lasting ring that falls into a skirt on the stem.
Amanita proxima is a very dangerous and responsible poisonous species of a syndrome that can be lethal.
Poisonousness is due to the presence of norleucine; if ingested the fungus causes the norleucinic syndrome, which leads to reversible kidney damage. The syndrome is therefore nephrotoxic, manifesting itself from 6-10 up to 12-48 hours with symptoms such as: vomiting, diarrhea, nervousness, dizziness, renal failure. Poisonings with this fungus give symptoms very similar to those registered for Amanita Smithian.