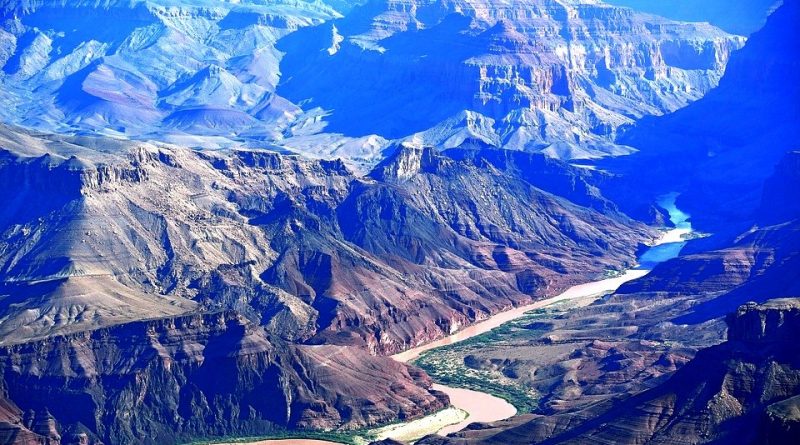 Flora –
Obviously the orographic and environmental conditions have had a fundamental importance in shaping a very particular vegetation.
The southern edge of the Grand Canyon lies on the edge of a plateau whose gray-green forests stand out in stark contrast to the arid lands below the edge. From here the cliffs descend to 1524 m on the Colorado River, crossing several biotic areas. It is a landscape characterized by high insolation, extreme temperatures and long periods of drought interrupted by torrential downpours in summer and snow in winter. The ground is thin; the fresh rock is located a few centimeters below the surface. The competition for humidity in this dry land is passionate.
On the edge, at altitudes above 2134 m, the dominant forest tree is the ponderosa pine. Below this altitude the dominant pines are pine pine, juniper and some oaks. The trees are interspersed with drought-resistant shrubs such as some ferns and cranberries. Hot and sunny areas along the edge can accommodate desert plants like Yucca baccata and some Cactus species.
Inside the Canyon the temperature can be 18 ° C higher than the temperatures of the overlying areas, reaching even 49 degrees C. Most of the inner canyon is considered desert, excluding areas along the river and tributary streams that have a rich riparian habitat. Much of the vegetation in the inner canyon is typical of that found in the deserts to the south: drought-resistant cacti and shrubs. The plants of the riparian airs include willow and tamarisk groves.

Fauna –
In terms of wildlife, the park is home to a wide variety of animals. Inside the Grand Canyon there are 75 species of mammals, 50 species of reptiles and amphibians, 25 species of fish and over 300 species of birds.
Some of the most important species living in the Grand Canyon include the mountain lion, the California condor, the Grand Canyon rattlesnake, the black widow spider, the large horned sheep, the bat species 22 and more.
Lizards, like the collared eastern lizard (Crotaphytus collaris), inhabit the Grand Canyon region. The collared lizard is the largest species of lizard in the country. The length of these lizards varies from 8 to 14 inches. They have big heads and powerful jaws. These lizards live in medium-low areas of the Canyon habitat and are not harmful to humans. 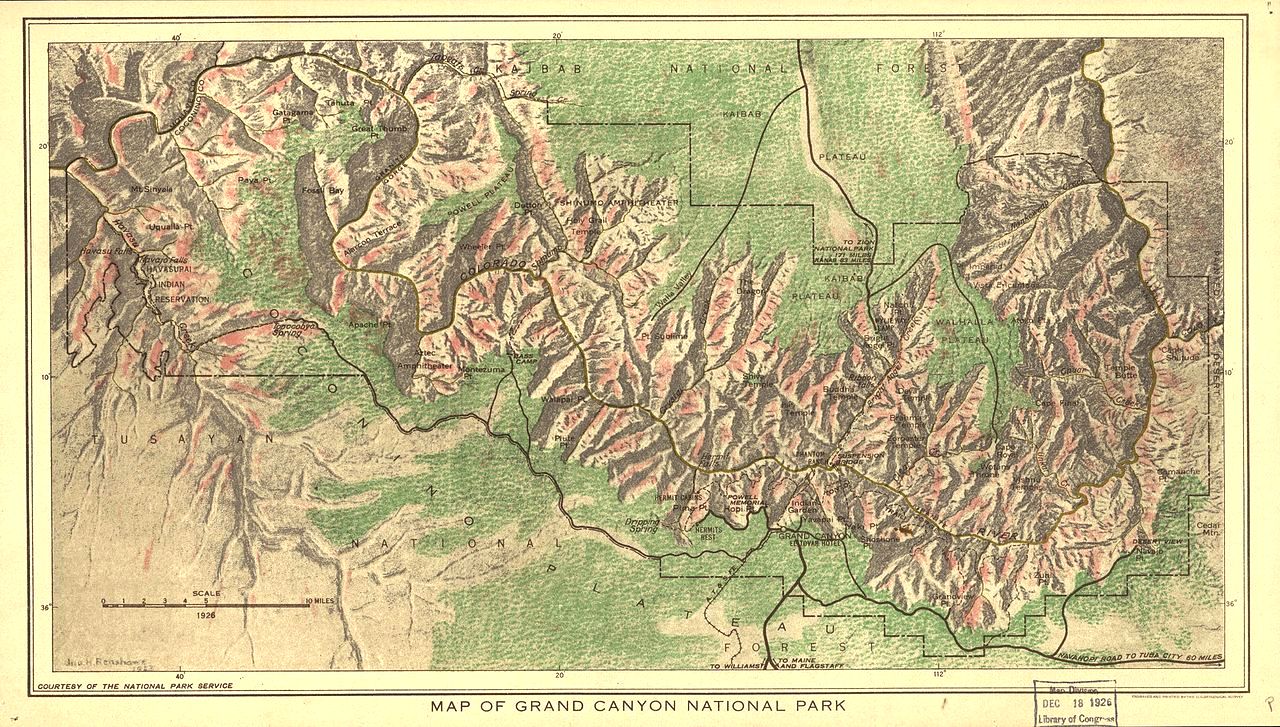 Another species of lizard, the Chuckwalla lizard is also located in the Grand Canyon. Chuckwalla lizards usually seek shelter in the rocky crevices of the Grand Canyon. They are elusive creatures that usually avoid human visitors to their homes.
The ringtail (Bassariscus astutus) is a mammal belonging to the raccoon family and is found in the arid regions of North America, including the Grand Canyon. Ringtail cats are usually nocturnal, feed on campground food or prey on rodents in the wild at night. When threatened, they produce a foul-smelling gas to ward off attackers.
The bighorn sheep (Ovis canadensis) are native to North America and are known for their large horns which can weigh up to 14 kg. The ancestors of this species are believed to have arrived traveling across the Bering land bridge from Siberia to North America. The sheep occupies a special position in Native American mythology. Although the sheep population multiplied exponentially over the years, the European colonization of the New World led to a dramatic fall in the bighorn sheep population. The decline was due to over-hunting and competition for pastures with introduced livestock and exposure to diseases to which animals lacked immunity. With conservation measures in place in recent decades, the bighorn sheep population has gradually recovered.
Today, a significant population of bighorn sheep inhabit the canyon walls and the rocky terrain. It is an incredible sight to watch the animals, climb, walk and jump along the steep cliffs of the Grand Canyon.
In addition, the Grand Canyon hosts 22 species of bats in its dark borders. The Canyon provides a protected habitat for these animals that are threatened in many other places where they live. Research is conducted in the Canyon region to understand the diseases that affect bats in other parts of their habitat in North America.
Mule deer are among the most common mammals sighted in the Grand Canyon, especially in the South Rim of the Grand Canyon National Park. Drivers are required to drive at low speed to avoid confrontation with the mule deer that often shoots in front of cars.
Elks are huge animals related to the deer family, but much larger than most other deer species. In the habitat of the Grand Canyon National Park moose are often spotted grazing in the southern edge near the wooded areas of Grandview Point and also at the entrance to the North Rim.
Coyote (Canis latrans) has a wide distribution and range in North America. The coyote’s ability to adapt quickly to human-modified environments reserves its position on the IUCN’s “Least Concern” list. Coyotes are a common sight at the Grand Canyon and can be seen inside the canyon and on top of the circles. Rodents and carrion serve as a primary source of food. Coyotes also visit garbage containers and campsites looking for food.
The Grand Canyon is home to a large number of powerful birds of prey. The California condor is the most notable of them. It is a rare bird that is on the IUCN endangered list. Captive breeding programs have helped to restore California’s condor populations to some extent. The Grand Canyon National Park is one of the controlled territories where captive bred birds are introduced. The bird has the largest wingspan of all birds in North America. The bald eagle, the national symbol of the United States, also lives in the Grand Canyon. During the winter, these birds can be spotted perching in trees along the river in the eastern canyon to catch the emerging fish.
Black crows can be seen in the South Rim of the Grand Canyon hovering over them like birds of prey. The golden eagle, another fascinating bird, also lives in the region where it soars high in the sky and seeks prey like small mammals. Pilgrim hawks, red-tailed hawks and vultures are other important species of birdlife in the Grand Canyon National Park.
The Grand Canyon thrives with poisonous creatures with fatal bites. There are at least three species of scorpions that live here. The most dangerous scorpion that lives in the Grand Canyon is the scorpion of the bark of Arizona (Centruroides sculpturatus). It is the most poisonous scorpion in North America and its bite can cause excruciating pain in adult humans for 24 to 72 hours. Even temporary loss of breath, convulsions and temporary dysfunction in the bite area can accompany the event. Death occurs rarely, but the chances are higher if the victim of the bite is a child, an elderly person or an adult with a compromised immune system. In addition to the scorpion of Arizona bark, the Grand Canyon is also home to another deadly arachnid, the black widow. The poison of the female of this spider is more toxic than the prairie rattlesnake. These spiders build their webs in the dark corners and crevices of the Grand Canyon and should be avoided.
The Grand Canyon rattlesnake (Crotalus oreganus abyssus) is a poisonous subspecies that dwells in the habitat of the Grand Canyon. These snakes live in the dark depths of the Canyon where they feed on birds, lizards and rodents. The rosy color of the snake’s subspecies allows it to blend perfectly with the surrounding soil. If left undisturbed, the snake barely hits humans.
Finally the mountain lion which is the common name for the puma (Puma concolor). It is a large cat native to the Americas and is the second heaviest cat in the region after the jaguar. Animals are usually solitary and secret by nature and hunt at night. Although rarely seen in the canyon region, there are reports of these animals that inhabit the Grand Canyon National Park.