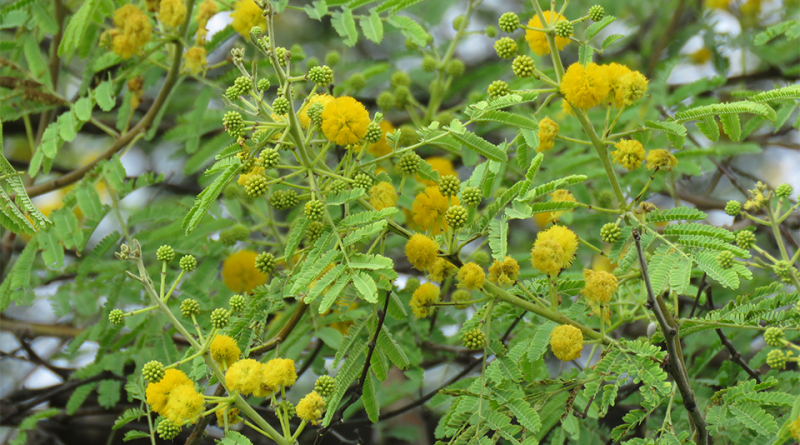 Etymology –
The term Acacia derives from the Greek name ακακια acacía (doubling of ακέ ακις acés needle, tip, thorn) with which Theophrastus and Dioscorides indicated a species of Egyptian Acacia.
The specific nilotic epithet is related to the Nile valley, Nilotic.

Geographical Distribution and Habitat –
Nilotic Acacia is a plant widespread in an area that includes Africa, the Arabian peninsula and the Indian subcontinent. In these areas it grows spontaneously in many African countries such as: Algeria, Angola, Botswana, Egypt, Ethiopia, Gambia, Ghana, Guinea-Bissau, Kenya, Libya, Malawi, Mali, Mozambique, Niger, Nigeria, Senegal, Somalia, South Africa , Sudan, Tanzania, Togo, Uganda, Zambia and Zimbabwe. In the Arabian peninsula it is found in Oman, Saudi Arabia and Yemen and in the Indian subcontinent, in India, Nepal, Pakistan, Myanmar and Sri Lanka.
It has also been introduced in many other countries including Australia where it acts as an invasive species, Cape Verde, Zanzibar, Iran, Iraq, Israel, Syria, Indonesia and Vietnam.
Its habitat also varies depending on the different subspecies, but this plant is however spread from sea level up to 2000 m of altitude where it resists temperatures that can reach 50 ° C. as regards the various adaptations, one goes from the African subspecies, such as A. n. subalata, A. n. leiocarpa and A. n. adstringens that prefer dry and sandy soils or savannahs with low rainfall, to others such as A. n. nilotica and A. n. tomentosa that frequently grow near watercourses or in wet areas; still others like the A. n. Kraussian grows both on dry soils and near water courses. Finally, as in the Asian subspecies A. n. indicates and A. n. cupressiformis, these give rise to dry low-altitude forests, especially in alkaline soils. 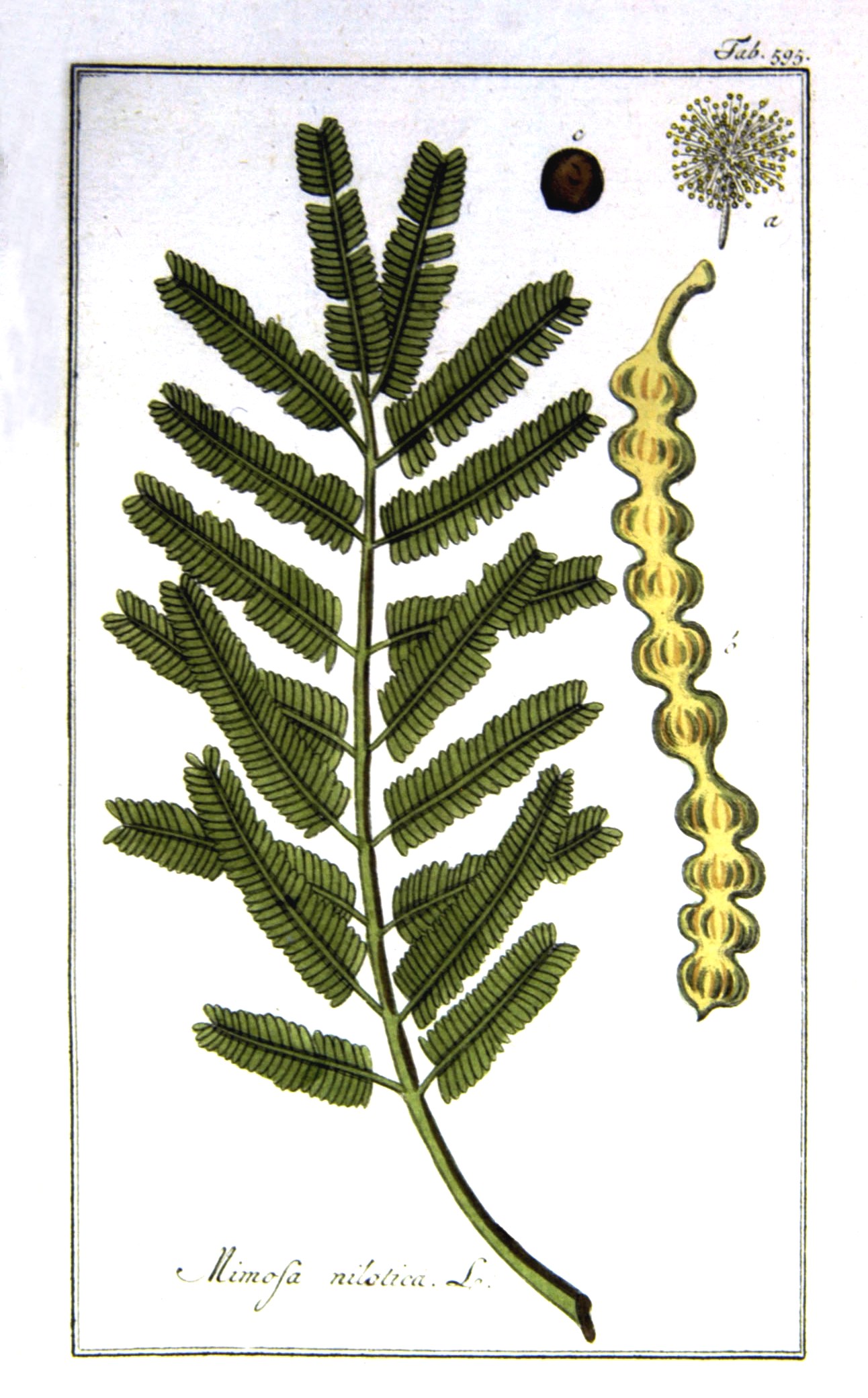 Description –
Acacia nilotica is a plant which, also depending on the subspecies and the habitat, can appear as a shrub, with a broad crown or arboreal shape that can reach up to 15–20 m in height.
However, the foliage is dense, with a hemispherical or flat shape and with branches that are characterized by having thorns up to 5 cm long.
The leaves are up to 7 mm long and 0.5 to 1.5 mm wide, bipinnate, composed of 12-30 pairs of leaflets, glabrous or pubescent.
The flowers have an intense yellow color and are gathered in feathery heads of 6–15 mm in diameter.
The fruit is a flat and indehiscent pod that has a color ranging from gray to brown; this is variable in shape in the different subspecies, and contains from 6 to 16 seeds.
These plants tend to lose their leaves during the dry season, although the fluviatile subspecies may behave like evergreens.

Cultivation –
For the cultivation of this species, remember that it prefers dry conditions, with an annual rainfall of 250-1500 mm, although in irrigation some varieties can grow in areas with less than 100 mm. In India, the optimal lower limit is about 600 mm without irrigation and there are records of upper limits of 2300 mm in Southeast Asia. For the choice of the optimal temperature consider 15 to 28 ° C, although they can withstand maximum daily temperatures of 50 ° C and fear frost, especially when young.
Nilotic Acacia has flourished for around three to four years under ideal conditions. Flowering is prolific and can occur several times during the year, depending on the availability of soil moisture. A mature tree can also produce 2000-3000 pods each containing usually between 8 and 16 seeds.
This plant will produce plenty of pods especially after 5-7 years of age. There are considerable variations so that trees adjacent to water are able to produce well in most of the years, trees that grow in dry areas, in the absence of winter rain, produce few seeds. The seeds are dispersed both by herbivores and by mammals and a high percentage of the seeds, even after ingestion they are eliminated viable being able to remain so for seven years or more.

Uses and Traditions –
This plant has been known since the time of the Pharaohs, where these trees were exploited in the Nile river forests of Sudan and Egypt. Currently, the forests of Sudan are governed by a rotation of 20-30 years, producing termite-resistant timber and, therefore, particularly suitable for railway sleepers. In India and Pakistan, the river plantations are governed with rotations of 15-20 years for the use of firewood and wood for objects.
Nilotic Acacia is widely introduced and cultivated in many parts of the Indian subcontinent and Pakistan, in the West Indies (Jamaica), Australia, Cyprus, Israel, Tanzania (Zanzibar), Cape Verde, Iraq, Indonesia (Java, Lesser Sunda Islands) , Vietnam, Nepal and Iran. However, it is also cultivated in its areas of origin, such as in Sudan, Egypt, Tanzania and Nigeria, mainly for timber and firewood, for tanning, as forage and as a shade tree; also in the Indian subcontinent it is cultivated for firewood and timber, for agro-forestry, land reclamation and other uses.
In some areas of the world, as in Australia, it has become an invasive species.
In the agro forestation, where it is widely used, it is planted in rows 5 m apart, both in agricultural fields and on the borders of crops. As a forage tree, it is used in many silvopastoral systems and its fragrant pods are particularly sought after by animals.
Furthermore this plant is widely used in the recovery of saline and alkaline soils. It is also popular as an ornamental tree especially in the avenues of India.
The wood of this plant is resistant and durable almost twice as much as teak and is very resistant to shocks. It is used for a wide range of building uses and also for handles and trolleys. The wood is hard, dark brown in color and has a high calorific value (4950 kcal / kg) producing excellent firewood and high quality coal.
The pods and leaves of Nilotic Acacia have high levels of crude protein (12.4%) and digestible (8%), energy (7.2 MJ) and are rich in minerals.
The pods are used as a supplement to poultry rations in India. Dried pods are appreciated and particularly sought after by animals that graze in pasture lands.
In India, the branches are commonly harvested for fodder.
Moreover, from the processing of these trees, a by-product is obtained which is the bark, which has high levels of tannin (12-20%). This is used in India as a bronzer. The pods of A. nilotica subsp. nilotica have been used in Egypt for over 6,000 years for tanning. Also there. nilotica subsp. Adstringens is used in Nigeria for both tanning and coloring.
Furthermore, the tannin content contributes to numerous medicinal uses by acting as a powerful astringent. It has also been discovered that it is a powerful molluschicide and algaecide, and the fruits, when added to the ponds, in Sudan, kill some species of snails that carry schistosomiasis without affecting the fish.
A root extract is a potential inhibitor of the tobacco mosaic virus. In East Java, sprouted seeds are eaten like vegetables and well-roasted seeds are mixed with coffee.
An important use of the Nilotic Acacia is that of the production of a rubber. In fact, a rubbery exudate known as gum arabic is extracted from its bark.
Gum, which was originally called gum arabic, has been collected from the forests of the Nile since the days of the Pharaohs, to obtain paints and medicines. It has some properties similar to those of real gum arabic (from acacia senegal) and is often used for the mold of calyces, as a dye, in the silk and cotton industry and in the production of paper (India).
This plant includes anti-diarrheal and emollient properties, and is used in the popular medicine of various African and Asian populations as a natural remedy for dysentery or for the treatment of skin lesions, sores and ulcers.

Preparation Mode –
From this plant we obtain a that is appreciated for its delicate floral taste, clarity, soft consistency and because it is one of the few honeys that does not crystallize.
This plant is also used as an ingredient in industrial-type foods and for drinks like some beers, some drinks.