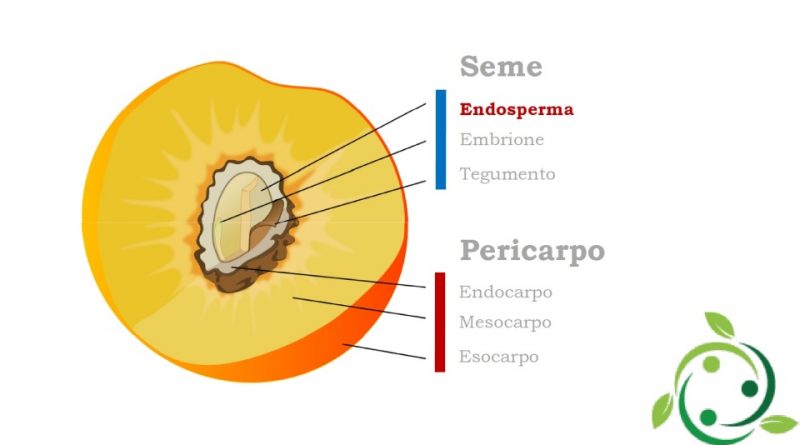 The term endosperm (from the gr. Ἔνδον “inside” and σπέρμα “seed”), in botany, means the reserve tissue contained in the seed, which is used by the embryo during germination and which originates in the embryonic sac.
The endosperm is a triploid tissue (in which each cell has three chromosomes per type) and is mainly composed of starch, but it can also contain oils and proteins.
The seeds of some plants absorb the endosperm in their cotyledons, which then becomes the major source of nourishment during development. Most, however, keeps the fabric as it is.
Cereals contain a large amount of endosperm. Thus endosperm plays a vital role in the world for human nutrition.
In Gymnosperms the endosperm is formed before fertilization by successive divisions of the embryonic sac nucleus, and has therefore been distinguished also with the name of primary endosperm.

In Angiosperms, on the other hand, it is formed following fertilization; while one of the two spermatic nuclei of the pollen tube, joining with the ovo cell, gives rise to the embryo, the other, joining with the two polar nuclei, gives rise to this nutritive tissue, also distinguished by the name of secondary endosperm.
This can be considered as a product of fertilization, but does not have the possibility of further development, ie it cannot, like the embryo, organize itself into a seedling, and is digested by the embryo itself.
The endosperm is not present however in all the seeds of the Angiosperms, since in many seeds the reserve substances are found stored in the same embryo, ie in the cotyledons (eg bean), while in others (eg cane), storing in the nucella, constitute the reserve tissue called perisperma.
Some seeds, as in the case of pepper, contain both endosperm and perisperm. Both endosperm and perisperm are extra-embryonic reserve tissues for the embryo that go by the name of albumen.