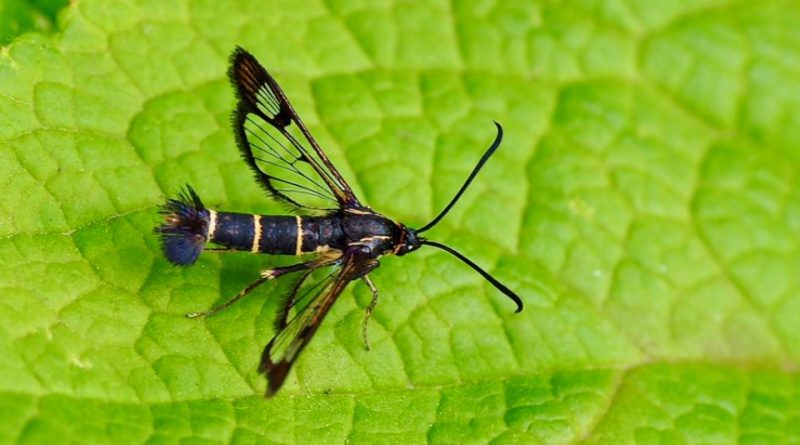 The Currant Clearwing (Synanthedon tipuliformis Clerck, 1759) is a moth of the Sesiidae family.

Geographical Distribution and Habitat –
The Currant Clearwing is an insect of Palearctic origin that has become invasive in the Neartica ecozona, which therefore includes the ecoregions of North America and in the eco-zone related to Australasia, where it feeds on Ribes, including Ribes nigrum, Ribes rubrum and Ribes uva-crispa but also of plants such as Khaki, Vine, Hazel, Raspberry, Evonimo.

Morphology –
Synanthedon tipuliformis is a small moth with a wingspan of 17-20 millimeters; the wings are transparent and the abdomen has black and yellow bands ending with a tuft of hair.
The larva is polipoda, about 15 mm long, of a white-yellowish color and with a brown head.

Attitude and biological cycle –
The Currant Clearwing winters in the larva state, of different ages, inside the tunnels dug into the plants.
When the larvae have reached maturity they are brought close to the bark where they fail.
Subsequently the adults flicker from a hole in the cortex, which had already been prepared by the larva before incarcerating.
The period of flickering starts from the second half of April with a greater intensity between June and July and can continue until September.
The females during their short life of about two weeks lay some tens of eggs near the insertions of the branches and in the bifurcations of the branches, inside the cracks of the bark.
The larvae will be born after about two weeks and immediately penetrate the internal tissues, passing between the fissures and bark wounds.
In this way the Synanthedon tipuliformis turns one generation a year.
The affected plants show yellowing of the foliage and reduced development of vegetation; the strongly infested branches can dry up and, made fragile by the galleries, can break under the action of the wind.

Ecological Role –
The larvae of Currant Clearwing feed on some plants, including, as mentioned, Ribes nigrum, Ribes rubrum, Ribes uva-crispa, Kaki, Vite, Nocciolo, Lampone and Evonimo.
The containment of the infestations of this insect can be operated by adopting cultivation criteria that do not include the excessive specialization of the plants, according to criteria of agroecology and adopting the mechanical struggle which involves brushing the trunks and the points where the eggs are usually laid, performed in winter. However, with the construction of modern plants, the density of populations of this insect tend to be high, so that the elimination of eggs does not always give good results and in large orchards is also impractical.
Methods of biological control can be adopted which can be carried out with the use of the entomoparasitic nematode Neoplectana feltidae.
In cases where, after having performed the brushing of the trunks, one realizes that the level of infestation is high, treatments can be adopted aimed at the infested woody organs, during the first period of maximum flicker. We use Fosforganici possibly activated by white oil. The chemical fight is however always a remedy worse than the cause that is to be found in the wrong design of the production plants, of the exaggerated agronomic techniques, such as some fertilizations, etc.
In any case, with the treatments you can get really positive results only if you wet the trunks and branches well and with plenty of insecticide solution, adding a little wetting to facilitate the penetration of the liquid into the bark’s crevices.