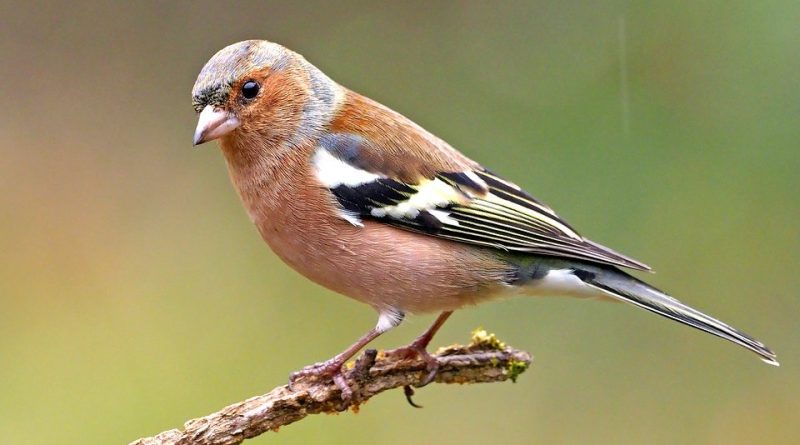 The chaffinch (Fringilla coelebs Linnaeus, 1758) is a small-sized passerine bird belonging to the Fringillidae family.

Geographical Distribution and Habitat –
The chaffinch is a species that nests throughout Europe, western Asia and northern Africa.
The area in which we find this bird is very wide and includes the whole of Europe, most of central-northern Asia (east to Lake Baikal) and North Africa.
The populations of continental Europe, the British Isles, the Caucasus, Anatolia, Iran, the Atlas Mountains and Macaronesia are permanent, those that live in climatically more rigid environments, such as those of Scandinavia, of Eastern Europe, Russia and Central Asia migrate south in the period between September and November and then return in the period of March-April.
The peoples of Mesopotamia, the Levant, Egypt and northern Libya migrate north during the summer.
This species was then introduced, in the nineteenth century, into New Zealand and South Africa.
In Italy it is stationary, common and numerous during the passage and the revision (September-November and February-April).
In terms of habitat the finch is a very adaptable bird, managing to colonize all the areas where vegetation and water are present. For this reason we find it in mixed or deciduous woods, in the Mediterranean scrub, in parks, in cultivated fields and orchards. Instead they almost always avoid urban areas but during the winter, they can go to the cities in search of food. 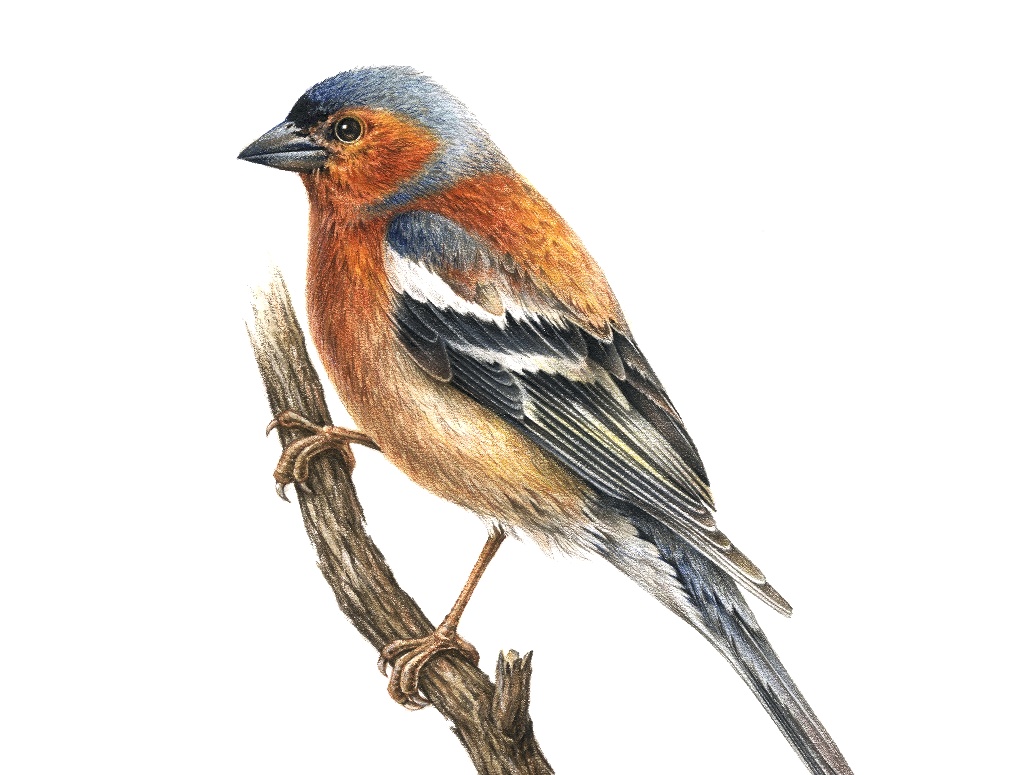 Description –
The Chaffinch is a small bird that measures 14-18 cm long, weighing 17-29 g and a wingspan ranging from 24.5 to 28.5 cm.
It is characterized by a plumage that presents a strong sexual dichromatism: in the males, in fact, the forehead is black, while the vertex, the nape and the shoulders are gray-blue, face and chest are of rust red color that fades into pink-cinnamon ventrally and in white on the undertail, while the sides are greyish, the back is red-brown, the codione is olive green and the wings have black coverts and remiges with a white transversal band that creates an unmistakable design also proposed on the tail, which it is in fact black with a white border.
The females do not present any sign of red or blue in the plumage; they have a livery of brown-yellowish color on most of the body, lighter ventrally and darker dorsally, and preserving the white patterns on wings and tail.
It should be emphasized that at the end of the breeding season, the plumage changes and becomes clearer and faded especially in males, with the appearance of brown shades on the white of the wings and cephalothoracic red which becomes rosy, while the dorsal blue fades into a slate color.
The eyes are black and the legs are flesh-colored in both sexes.
The beak is bluish-black during the mating season and rosy during the winter season, with a tendency to lighten at the base in both periods.
Moreover in these birds we can note the variation of intensity and extension of blue and bodily red coloration in males according to the subspecies taken into consideration, as well as the medium size.

Biology –
Fringilla coelebs is a small passerine that, depending on the region where it lives, can have two or three broods per year.
These are essentially monogamous birds, in which couples often persist over time.
The reproductive period varies according to the area that the species frequents but generally it is placed in late spring and goes from April to June. During the mating season the males become rather territorial, and they sing almost incessantly from roosts in evidence to attract the females to themselves and choose their partner, driving out any intruders.
After mating the nest is built, in the shape of a cup, with great care by the female only and is placed on trees and shrubs.
The female lays 4-5 glossy eggs, of a color varying between bluish and rosé, provided with a sparse brown mottling: and with an average size of 19 × 15 mm, for a weight of 2.2 g. The eggs are always and only incubated by the female, while the male feeds it, for a period of 11-13 days.
Instead, the chicks are looked after by both parents and they leave the nest at around 15 days.
The young finches are already able to reproduce from the age of age. Of these, only around 53% exceed this target, however. The life expectancy of finches seems to be only three years in the wild, while in captivity they can live over ten years.

Ecological Role –
The Fringilla coelebs is a diurnal bird that, apart from the reproductive period, gather in small flocks, sometimes accompanied by the similar peppola, with which hybridization cases are also known.
These birds spend most of their time searching for food, on the ground or between tall grass stems, keeping in contact with each other by peeping lures.
It frequents tree-lined countryside, broadleaf wood clearings where the male delimits the breeding area by emitting the characteristic song “in verse” repeated throughout the day; moreover the song seems to undergo regional variations comparable to real dialects.
The feeding of the finch is essentially vegetable but in spring and summer the diet also includes animal substances.
The diet is therefore composed, in a more or less balanced way, of material of vegetable origin (mainly seeds and grains, but also berries and sprouts) and animal (insects, larvae, small invertebrates).
In winter, these birds approach the cultivated fields in search of food.
In Italy the area of ​​the population appears to be vast (greater than 20000 km²) and the number of mature individuals is estimated at 2-4 million, with a stable trend in the period 2000-2010. The species therefore does not seem to reach the conditions to be classified within one of the threat categories (30% population decline in three generations, reduced number of mature individuals, restricted range) and is therefore classified as Less Concern (LC).