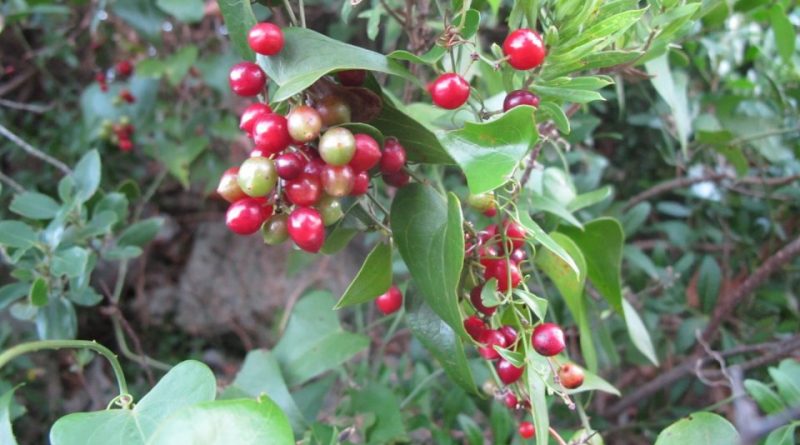 The common smilax (Smilax aspera, L. 1753) is a lianosa shrub species of the Liliaceae family.

Systematics –
From the systematic point of view it belongs to the Eukaryota Domain, United Plantae, Magnoliophyta Division, Liliopsida Class, Liliales Order, Smilacaceae Family and therefore to the Genus Smilax and to the S. aspera Species.

Etymology –
The term Smilax derives from the Greek σμιλαξ, the name by which ancient plants were designated by the authors as very different from each other. In the Latin writers Pliny and Ovid the name was used for various thorny climbing plants. The origin of smilax is however from Smilace which was the name of a nymph of Greek mythology who, hopelessly and unhappily in love with the young Croco, who committed suicide because he could not love her for the opposition of the Gods of Olympus, was transformed into a climber.
The specific epithet aspera comes from ásper rough (to the touch), rough, rough, bristly, bristly, pungent.

Geographical Distribution and Habitat –
Smilax aspera is native to the tropical and temperate-warm countries and is widespread in Mexico, the Canary Islands, central Africa (Democratic Republic of Congo, Kenya, Ethiopia), Central Asia (India, Bhutan, Nepal) and regions of the Mediterranean area.
This plant is also present in Italy where it is common in most of the peninsula, in the major and minor islands; in the North it is rare and occurs only in isolated stations (Trieste, Grado, Chioggia, Cervia).
This species grows wild in the woods and in the spots. It is a species linked essentially to the sclerophilous environment, from the holm oak to its degraded forms up to the Oleo-Ceratonion and the garrigue, at altitudes ranging from sea level up to 1,200 m. 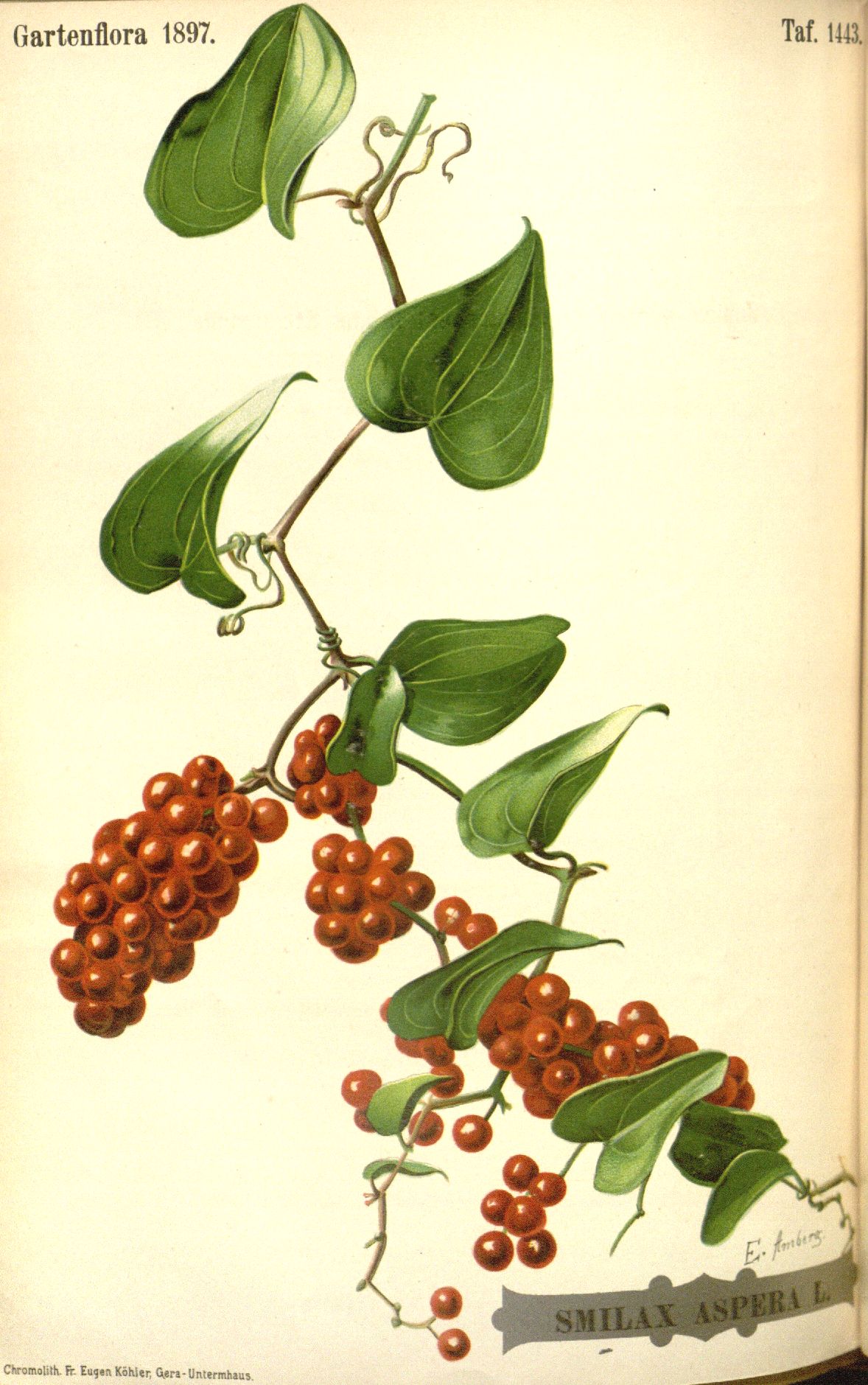 Description –
Common smilax is a shrubby lianosa, climbing plant, characterized by a flexible and delicate stem, but sprinkled with very sharp thorns.
The leaves are heart-shaped, with toothed and spiny margins and with the median rib of the spiny inferior page.
The flowers are very fragrant, small and not very showy, of greenish-yellow color, collected in small umbrellas.
In the Mediterranean environment, anthesis is between August and October.
The fruits are berries, gathered in clusters, which reach maturity in autumn.
These have a diameter of 4.1-9.6 mm, globose, green then yellowish, red and almost black when ripe. The seeds are 3.1-4.7 x 2.3-4.3 mm, ovoid or subglobose, smooth, bright, brown-reddish, with the ilo surrounded by an arerola.

Cultivation –
Smilax aspera, despite being a wild plant, can be cultivated for ornamental and phytotherapeutic purposes.
In order to cultivate it in optimal conditions and to produce flowers and berries, it is necessary to choose an exposition in full sun sheltered from strong winds, even if it develops well in partially shaded places. It bears the heat of summer well and does not fear frost.
It adapts to being cultivated in any type of soil even if it prefers the moist, loose, sandy or even clayey but well-drained soil.
This plant, being a spontaneous species of the Mediterranean scrub, bears long periods of drought and although content with the rains it must be watered during periods of great drought to keep the soil moist to promote the growth of delicate flexible stems.
For the fertilization it is possible to provide with organic substances before vegetative growth and buried at the foot of the plant.
a plant reproduces by seed but can be propagated by agamic or vegetative means by dividing the heads.
Sowing takes place at the end of July or beginning of August directly at home or in autumn in a cold seedbed containing specific soil, kept constantly humid until the tender shoots appear.
To easily propagate the Smilax aspera you can also take cuttings of roots at least 10 centimeters long and put them to root in a glass of water. Once the rooting has taken place, the new plants must be transplanted to their final home.
The planting should be done in spring or autumn in deep holes, about twice the breadth of earth that surrounds the root system.
To make hedges, we recommend supporting the plants with metal mesh or wooden supports.
Pruning should be done after flowering to encourage the release of new shoots. The apical stems are shortened and those damaged by cold and dry ones are cut off.

Uses and Traditions –
The Smilax aspera in Italy, as well as with the name of salsapariglia nostrana is also known with the common name of stracciabraghe or strazzacausi.
In the literature there are passages where reference is made to this plant. In Euripides Le Baccanti (III episode 700): “All crowned with garlands of ivy, oak and smilace in bloom”
In Plato in his La Repubblica (Book II, 372b): “Lying on pallets sprinkled with smilace and myrtle, they will feast well in the company of their children and they will drink wine, garland and sing hymns to the gods, happy to be together”
This plant is the favorite food of the Smurfs who are the imaginary characters of the comics created in 1958 by the Belgian Peyo.
The root of this plant contains numerous active ingredients including smilacin, salsasaponin, salsasapinic acid.
It has sweat and cleansing properties and can be used in infusions and decoctions to treat flu, colds, rheumatism, eczema. It also has expectorant and emetic properties (if administered in large doses) and the extracts are used in galenic formulations to improve the absorption of pharmacological active ingredients.
Smilax aspera berries are insipid and unattractive to humans but are a source of nutrition for many species of birds.

Preparation Mode –
This plant is used in some regions of Italy (as in Salento) in the same way as asparagus; in fact the tender shoots are collected and used in the same way, prepared after boiling in omelette; with eggs; in oil (preserved); in salad, boiled and seasoned with oil and wine vinegar.
Furthermore, as mentioned, it can be used to prepare infusions and decoctions to cure flu, colds, rheumatism and eczema.