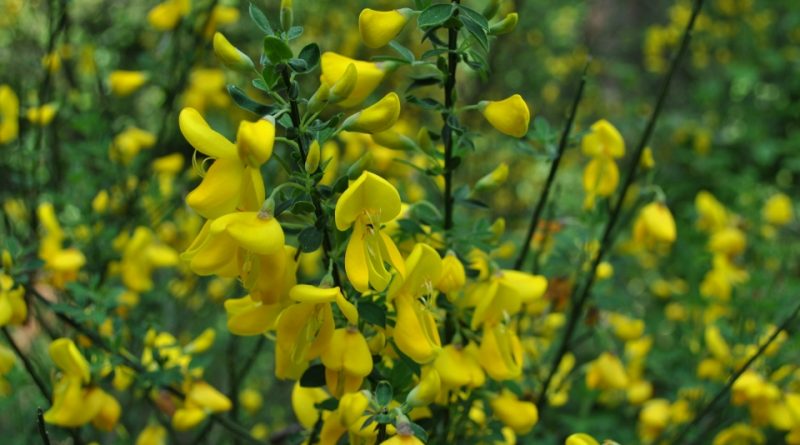 The common broom (Cytisus scoparius L. & Link, 1822) is a shrub species belonging to the Fabaceae family.

Etymology –
The term Cytisus seems to derive from the Greek kytinos, which is the ancient name of the Medicago arborea.
The specific epithet scoparius refers to the ancient use of rustic broom suitable for cleaning bread ovens, which was made with its flexible branches and hardly flammable.
The vulgar name “broom of the charcoal burners” comes from the use of its branches which thanks to their low flammability, placed on the top of the wood piles surrounded by the earth, which formed the charcoal piles, allowed to burn slowly for a better quality of the produced coal.

Geographical Distribution and Habitat –
The Ginestra dei Carbonai is a plant that has its own area of ​​origin in the temperate part of the European continent.
In Italy it is a common species on the whole territory (a little less in the north-east); it is present in the Alps across the border in France (departments of Alpes-de-Haute-Provence, Drôme, Isère and Savoy), in Switzerland (cantons of Valais, Ticino and Grisons), in Austria (Länder of Vorarlberg, North Tyrol, Salzburg, Carinthia , Styria, Upper Austria and Lower Austria) and in Slovenia. On the other European reliefs it is found in the Black Forest, Vosges, Massif of the Jura, Massif Central, Pyrenees, Dinaric Alps and Carpathians. It is present throughout Western Europe and part of Scandinavia.
Cytisus scoparius prefers siliceous or decalcified soils, clearings, half-shade places, hill woods and moorlands (always on acid soil); but also moors and lavender populations, garrigues and low spots, meso-thermophilous shrubs, pine forests, juniper, hornbeam, oak, birch and chestnut trees.
It grows well on siliceous substrates with acid pH, dry and with average nutritional values ​​and with an altitude distribution ranging from sea level up to 1400 m s.l.m .. 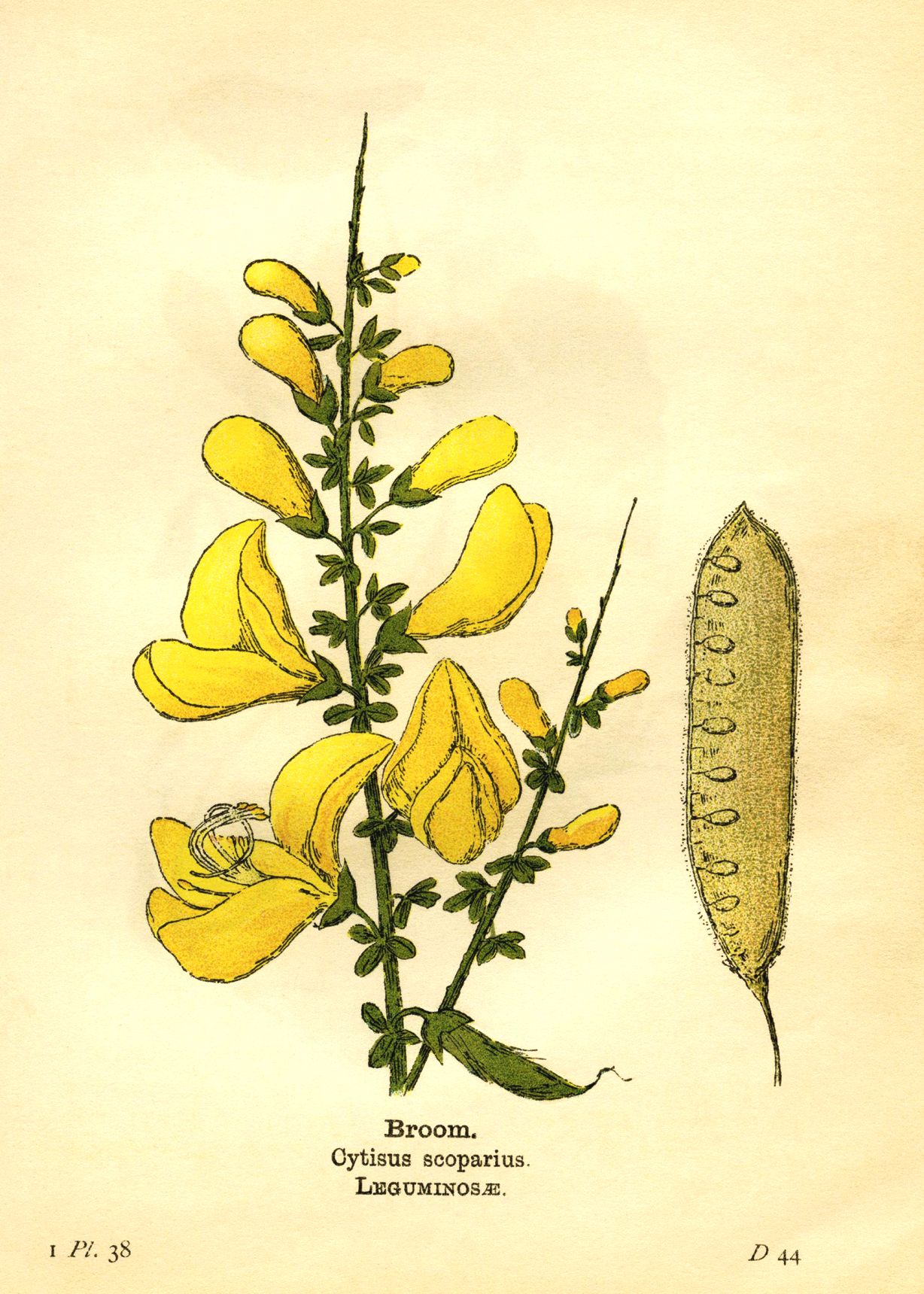 Description –
The common broom is a deciduous shrub, which develops from 0.60 cm to 3 m, very branched and not very leafy at the fructification with erect stem, glabrous, striped and angular for 5 longitudinal sharp edges, with young green branches and straight.
The lower leaves of the old branches are carried by flattened petioles; these are divided into 3 obovate or oblong and slightly pubescent leaves; the upper leaves and those of the young branches are simple, lanceolate, subsessile, 1-2 cm long.
The flowers are fragrant, numerous, hermaphroditic, with a color varying from yellow to intense gold; these bloom isolated or paired with the armpit of the leaves of the stems of the previous year, to form showy raceme inflorescences, carried by glabrous and whitish pedicels, at least twice longer than the calyx.
The calyx is bilabiate, glabrous, 6-7 mm; the corolla is deciduous, of a papilionaceous appearance and composed of the dull hull; the banner is marginalized at the apex and rounded at the base; the wings are oblong and hairless, all elements more or less the same length (16-24 mm).
The androceum is composed of 10 stamens (4 long, one median and 5 short), diadelfi (with the filaments welded together in two groups) with basipisse and dorsifisse anthers; the ovary is with the edges of the ciliate and hairless or hairy stylus.
The fruit is an elliptical, flattened legume of 20-50 x 7-12 mm, ciliate on the margins, green then blackish-brown when ripe, when with explosive dehiscence it expels the seeds (generally 13) ovoid or elliptic and flat, 2) 2.7-4 x 2-3 mm, brownish or greenish with a white-yellowish strophe.

Cultivation –
Cytisus scoparius is an easy plant to grow.
The planting should be done in the period between March and April, or in October, using plants grown in pots, since if the roots are not wrapped in earthen bread the plant bears the transplantation badly. The soil must be well drained, fertile and in full sun. The calcareous soils are ideal for brooms but still they are good even in richer soils, the important thing is not to excessively water these plants because in the long run they can suffer water stagnation.
For propagation, consider that the Cytisus scoparius multiplies easily, sowing in pots or terrines in the period of April. The seedlings are replaced, one by one, in pots of about 10 cm that are buried outdoors. They settle permanently in October.
It can also be reproduced by agamic treatment, for example through cuttings. The ideal period to carry out this operation is the months of May and June in which you have to cut one or more branches from a broom plant, remove most of the leaves to leave only a few and then put the cuttings with the part of the branch all inside of a mixture of peat and sand. Every 3-4 days, when the soil is dry, remember to water it and after a few days the cuttings of the charcoal broom will start to emit the first roots.
As for pruning, most Cytisus scoparius species do not require regular interventions. When this is necessary, it is advisable to carry it out after flowering, removing most of the branches of the previous year. The pruning of the broom must be done in a decisive manner and must be cut, leaving roughly a quarter of the length of the branches that are present on the plant. The pruning of the charcoal broom must be decided as they are plants that react very well to the cut and that if they are not pruned every year, they end up over the years to no longer produce many flowers. For this reason it is good to remember every year, after the flowering and before the winter arrives, to prune the plants.

Uses and Traditions –
The name of Ginestra dei Carbonai derives from the traditional use of its branches which, thanks to their low flammability, placed on the top of the wood piles surrounded by the earth, which formed the charcoal piles, allowed to burn slowly for a better quality of the coal produced.
Always the charcoal burners used its branches to build the roof of their huts, in the woods where they worked in the summer.
This shrub species is also cultivated for ornamental purposes due to its abundant flowering and its rusticity and as for all the brooms it is used for the consolidation of slopes and stony slopes. From the fibers of the stem we get fabrics, paper, baskets, brooms, dyes and repellents from its flowers while its elastic wood was used to make crossbows.
In the environment of gardening and floral trade there are numerous varieties.
The plant is also used in the kitchen using its flowers and seeds.
Cytisus scoparius is a vasoconstrictor, cardiotonic, cathartic, diuretic and emetic plant, but it contains toxic glycosides whose ingestion causes agitation, nausea, vomiting, hypotension and hallucinations.
In detail, according to popular medicine, this plant has the following medicinal properties:
– anti-arrhythmic (regulates the action of the heart);
– anti-rheumatic (reduces pain due to inflammation of the joints);
– cardiotonic (regulates heart rate);
– cathartic (generic properties of purification of the organism);
– diuretic (facilitates the release of urine);
– emetic (useful in case of poisoning as it causes vomiting);
– vasoconstrictor (constricts blood vessels increasing pressure).

Preparation Mode –
Cytisus scoparius, as mentioned, is also used in the food sector. The edible parts of this plant that are used are the flowers that can be used as substitutes for capers or added to other vegetables in salads.
Even the seeds are used, after roasting, as coffee substitutes. In any case, moderate use of this plant is recommended as it can be toxic due to the presence of some glycosides.