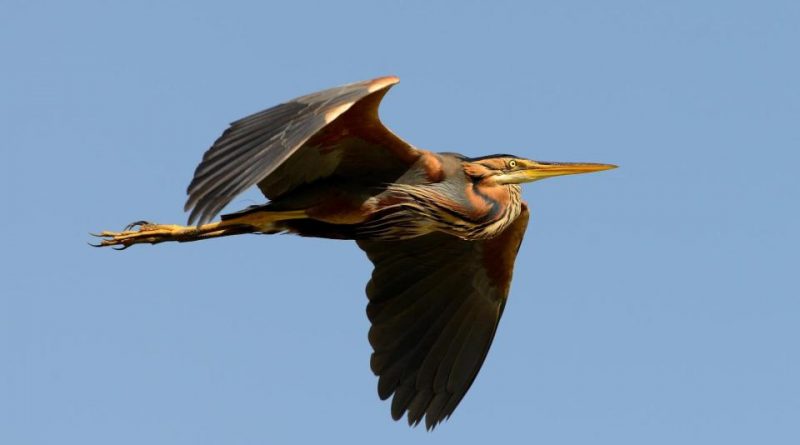 The purple heron (Ardea purpurea Linnaeus, 1766) is a bird belonging to the Ardeidae family.

Geographical Distribution and Habitat –
The purple heron is a species widespread in Eurasia, Africa and Indonesia.
In Europe, the distribution of this bird is concentrated mainly in the central and southern regions. In Italy the species is present and nests regularly in the Po Valley, from the Comacchio Valleys to the Venice Lagoon, from Mantua to the main rice-growing areas of the Lombard-Piedmontese plain. It is also observed in the plain between Florence and Pistoia. In prevalence it is nesting and migratory, while our country is chosen only occasionally as a wintering quarter.
Its habitat is represented by freshwater lakes, bordered by reeds. 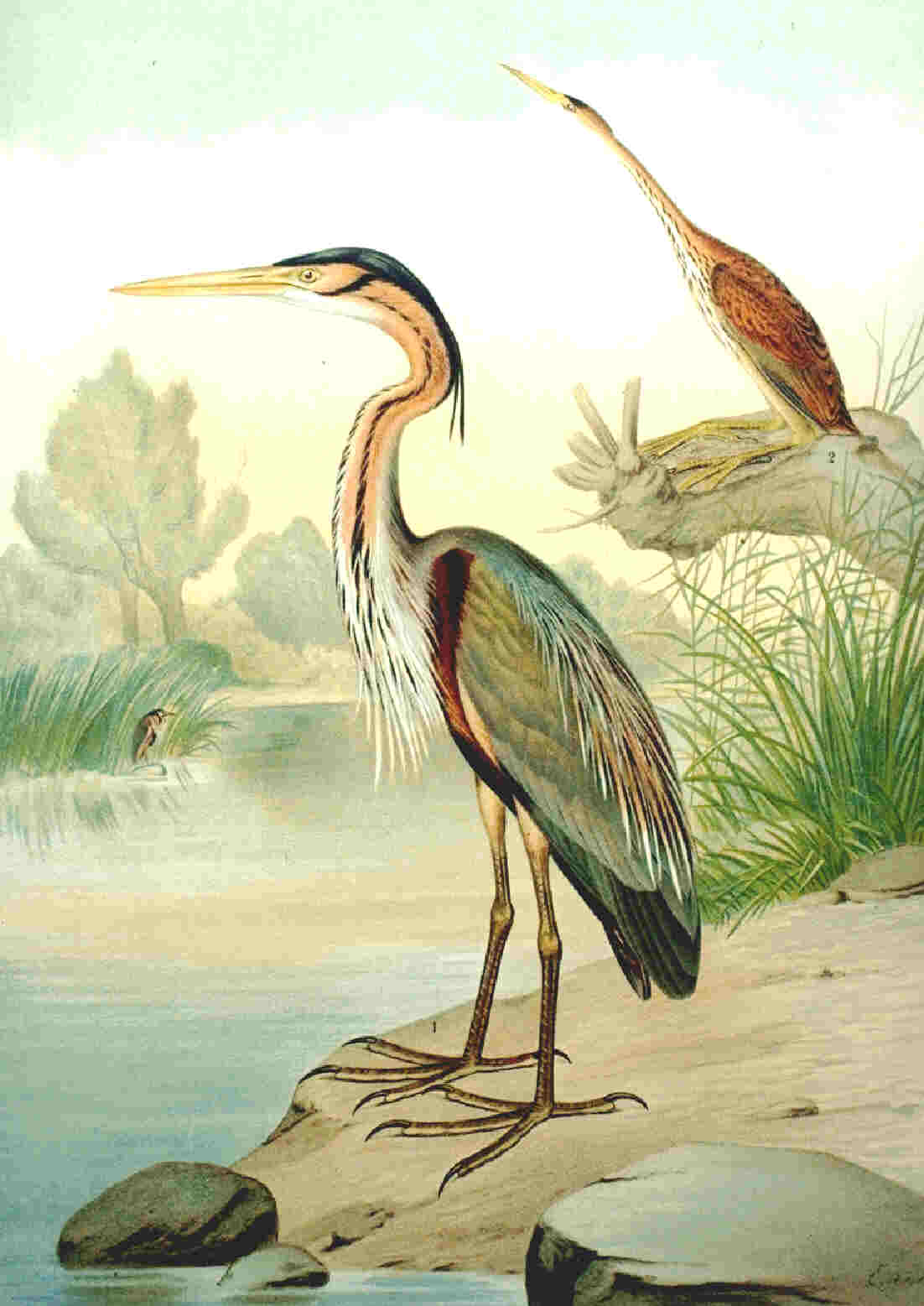 Description –
The Ardea purpurea is a rather large heron, with a wingspan ranging from 120 to 150 cm. The total length varies between 80 and 90 cm and the weight between 500 and 1400 g.
This species is slightly smaller in size than the gray heron.
The neck is long and S-shaped brown with a black stripe.
It is recognized as it has an important and elegant tuft of feathers that descends from the beak to the neck, with a remarkable chromatic variety ranging from brown to reddish, with the central blackish part, like the head and the upper part of the beak. The lower parts appear brownish-black, while other important golden feathers emerge from the back.
The livery, during the period of courtship, acquires a much more attractive plumage, especially on the part of the neck.

Biology –
The purple heron is a bird that tends to nest in small groups, generally composed of two or three pairs, sometimes also together with other species (such as the gray heron, the squacco heron, the great white heron or the night heron). The period is between late April and early May.
The nests, which are built with reeds or tree branches, are usually made inside reed beds or among other plants typical of wet areas, generally between 0.5 and 1 m from the water surface , on the previous year’s prostate vegetation or on low bushes but can also be placed on trees up to 25 m from the ground. Both partners cleverly weave brushwood and twigs, building a spacious nest.
The nesting takes place between April and June and the female lays 3-5 green-colored blue-spotted eggs. The only annual brood and hatching is asynchronous. The incubation period lasts 25-30 days and the flock is about 45-50 days after hatching.
Both parents take care of the little ones at least until they have learned to fly.

Ecological Role –
The Ardea purpurea lives exclusively in the extended reed beds of marshy areas with dense vegetation, an environment to which it is perfectly adapted. Stationed on trees or in open waters rather rarely. It feeds mainly on fish up to 20 cm long, but also on frogs, leeches, small mammals and insects (larvae and adults). During the hunt, explore dense reeds with small ponds and ditches, lurk in shallow water to hit the prey with a quick snap forward of the neck.
It is usually active at sunset and at dawn and can live even more than 20 years.
In Italy the purple heron is a breeder, regular migrant and occasional winter visitor. The migratory movements take place between August and mid-November and between March and May.
It is a protected species under the law 157/92. The main threat is the destruction of the reeds but also the agricultural intensification, the use of biocides, hormones and chemical products, landfills, reclamation and drainage in general, the filling of ditches, canals, ponds, water bodies, marshes or peat bogs, the absence of flooding, the reduction or loss of specific habitat characteristics and the reduction in the availability of prey (including carcasses) (eg for birds of prey).
Systematics, Habitat, Biology, Ecological Role …