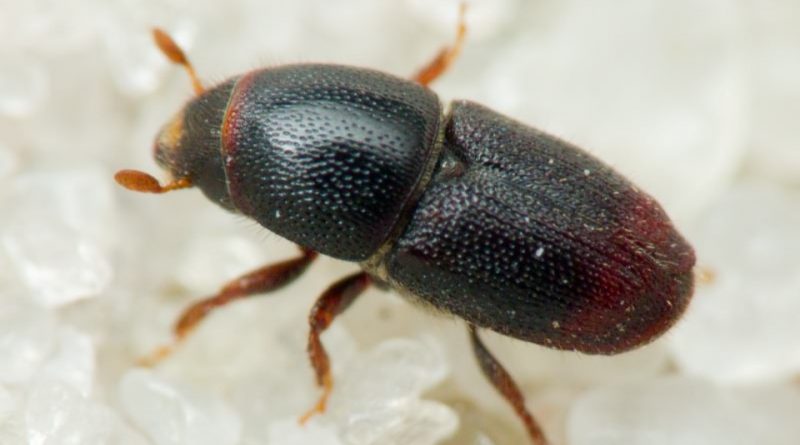 The shothole borer (Scolytus rugulosus Müller, 1818) is a beetle from the Curculionidae family.

Geographical Distribution and Habitat –
The shothole borer is a widespread insect in various parts of the world, from Europe to North America. It is present in Italy where it carries out its biological cycle on various plants, of which preferably cherry, plum (both cultivated and spontaneous), apricot, peach and almond; less frequently colonizes pear, apple, quince and rowan; infestations also occur on broadleaf trees such as elm, alder, beech, birch and hazel. Infestations occur on already weakened plants.

Morphology –
Scolytus rugulosus is recognizable as the adults are 2-3 mm long, dark brown with pronotum (dorsal part of the first thoracic segment) well developed and with large oblong spots.
The extremities of the elytra, of the tibias and of the tarsi are of reddish color. On the elytra there are fine golden hair erect and a very close punctuation, sunken within light furrows.
Larvae are typically endophytic cortices.

Attitude and biological cycle –
The shothole borer is a predominantly secondary phytophagous that above all attacks plants already weakened and damaged by other plant diseases or by physiological environmental stresses.
This insect then establishes itself on:
– young twigs, in which insects dig small tunnels, especially at the axil of withered buds and shoots;
– woody organs of greater diameter such as the branches and stems.
In these organs, under the bark, the adult insects dig prolification galleries, from which, between the wood and the rind, individual longitudinal galleries radiate, produced by the larvae during their development cycle.
The tunnels are clearly visible barking the organs affected.
Scolytus rugulosus makes two generations a year and hibernates as a larva in the nutrition galleries.
The adults come out in the period between May and June from the holes present on the infested organs and carry themselves on healthy plants where they dig tunnels in the axilla of the buds waiting to reach sexual maturity.
At maturity, the females are fertilized by a single male and begin to dig a tunnel in the subcortical area (maternal or prolific gallery) that is 15 to 40 mm long, which runs parallel or slightly oblique to the wood fibers.
In these tunnels, the female lays 20-40 eggs inside small ones.
The newly hatched larvae begin to dig individual sinuous tunnels and intersect in the terminal tract, affecting the first layers of sapwood (younger wood, corresponding to the xylem vessels active in the transport of water).
After 30-40 days from birth the larvae reach maturity and a cell is dug into the sapwood where they pupil.
The adults appear after 10-15 days coming out in the period between August and September through small flicker holes made in the bark. The second generation follows, whose larvae exceed the winter.

Ecological Role –
The shothole borer affects above all Drupacee, Pomacee, Forest and ornamental Vine and Hardwood.
On the affected plants the woody organs, after the infestation, appear riddled due to the presence of numerous and evident holes of flicker of the adults.
In Drupacee abundant rubber comes out of these holes. These plants, however already wasted, gradually and gradually weaken; inevitably they die in a few years. It should be remembered that infestations generally occur on plants that are weak or under stress due to: the effect of drought, severe attacks of pathogens or pests, post-transplant crisis or other causes.
The containment interventions of lignicoli insects is, in general, very difficult because it is not always possible to reach the phytophagous when it is inside the wood; the fight against Scolitide, therefore, is typically of a preventive agronomic type.
The interventions must therefore be aimed at maintaining the health of the plants to prevent infestations. Among the agronomic recommendations, we highlight:
choice of suitable planting sites, avoid transplants at the end of winter, irrigations and balanced fertilizations, etc. In the case of infested plants it is important to eliminate the affected areas (eg removal of a branch) and then burn them, these operations must be conducted before the adults escape (by mid-April).
If the infestation takes place in the nursery or in young plants on the farm, it is possible to carry out chemical treatments (1-2) using broad-spectrum insecticides at the moment of the flicker of the adults that come from the wintering larvae. This intervention must always be related to the biocenosis of beneficial insects and must therefore be conducted under the guidance of an Agronomist or Forest Doctor.