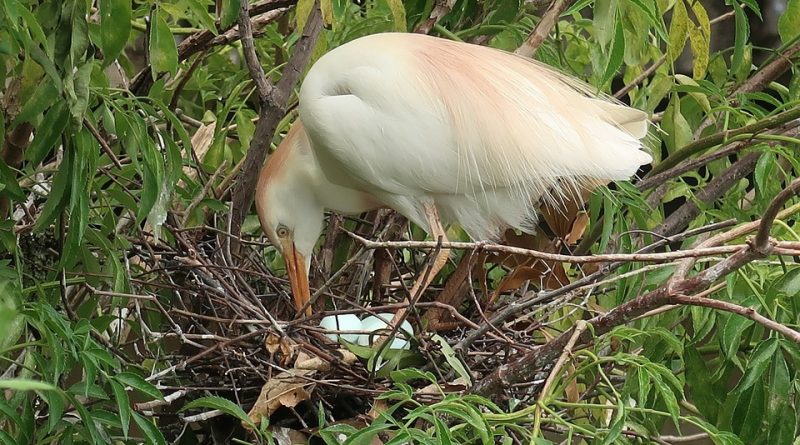 The cattle egret (Bubulcus ibis Linnaeus, 1758) is a medium-sized bird from the Ardeidae family.

Systematics –
From the systematic point of view it belongs to the Eukaryota Domain, Animalia Kingdom, Phylum Chordata, Aves Class, Subclass Neognathae, Superorder Neornithes, Order Pelecaniformes, Family Ardeidae and therefore to the Genus Bubulcus and to the species B. ibis.

Geographical Distribution and Habitat –
The cattle egret is a bird found in much of Asia, Africa, the Americas and southern Europe, including central and southern Italy. Before the 1930s it was not known in any part of the American continent, which today is almost entirely occupied by the species.
In recent years its territory of certification has been expanding and there has been an increase in populations and nesting in northern Italy. Even the contingents of wintering animals have increased significantly.
In Italy the first nesting documented in Italy took place in Sardinia in 1985, although specimens in a wedding dress were reported in the same period in other regions. Subsequently nesting was documented in 1989 in Piedmont and subsequently in other regions. 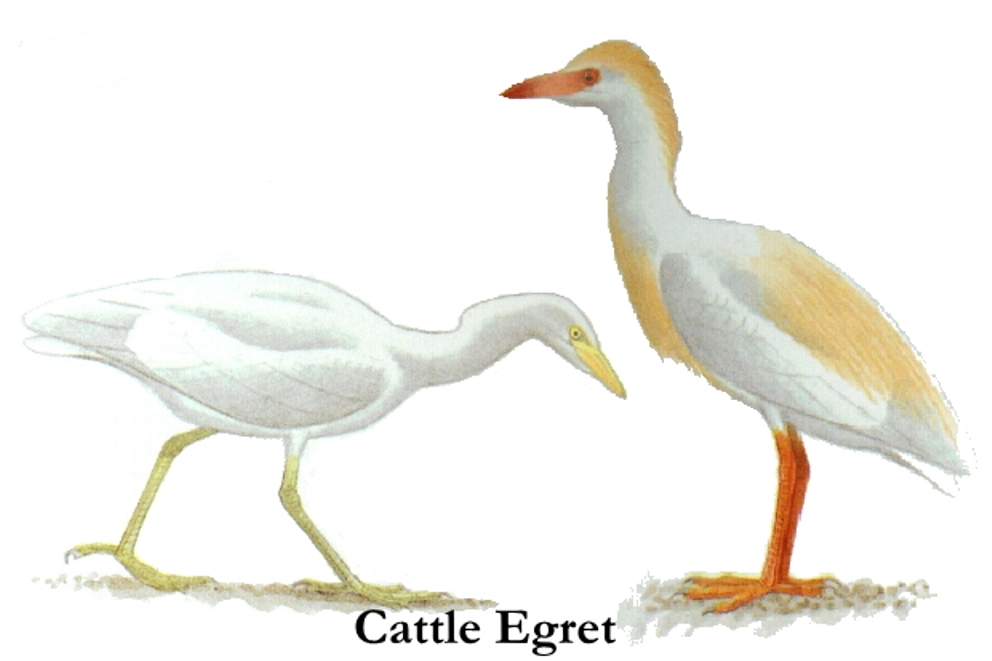 Description –
The Bubulcus ibis is a medium-sized bird with a length of 46-53 cm, a height of 25-30 cm, a wingspan of 90-95 cm and a weight of around 220 g. but which in some specimens can reach 500 g. It is recognized for having a white plumage, short neck, yellow beak and gray legs. During the breeding season the adults wear a more colorful livery with orange feathers on the vertex, on the nape and on the back, beak and legs of carnacino color. The winter dress is instead white with yellow beak.
In the young the plumage is entirely white, while the legs and beak are predominantly black.

Biology –
The cattle egret is a strongly social bird even in the nesting phase when it gathers in colonies sometimes very numerous, placing the nest on trees facing rivers or bodies of water, groves among the rice fields and notoriously, inside of heronries mixed with other species of ardeids.
The nesting areas in the northern hemisphere, are occupied in late spring when returning from migration or seasonal movements. The courtship is typical of herons with fluttering in front of the female carried out directly on the nesting site, with curling of the feathers on the head, waving dry twigs in the beak and all accompanied by a great chatter.
From that moment on, the colony became very noisy both during the day and at night, a disorder even more marked at the time of the birth of the children.
The nest is made in the form of a platform with dead branches and falaschi; this is not stable so much that it is not rare that during the growth the small ones fall to the ground feeding a work of predation from part of the mustelids, rodents and foxes that constantly go around at the feet of the colony.
The female lays 2 to 5 blue-white eggs, which are hatched by both partners for about 25 days. At birth, the young are covered with a slight down but not able to regulate, so they must always have the constant assistance of one of the parents but already in the second week of life they can remain alone in the nest for the time necessary to procure food from part of adults, protected only by mutual assistance provided by the colony.
When three weeks old the juvenile livery is completed and the young leave the nest by climbing and venturing on the branches all around the nest until the seventh week when they will become autonomous.

Ecological Role –
The Bubulcus ibis frequents damp environments but also plowed and sown fields, where it often follows the tractors during the processing of the fields. The colonies are usually composed of about ten specimens.
It feeds on fish, amphibians and aquatic and terrestrial invertebrates, as well as small rodents (voles) that it finds in the agricultural lands in phase of workmanship. In fact, where possible, it follows herds of domestic or wild animals and it also settles on their back to feed on parasites. He does not disdain to prey on nests he finds in his continuous walking and also to attack weakened or wounded birds.
We will often find it with cows, as the vulgar name suggests, but just as often with other grazing animals, as the Latin name suggests, “peasant heron”.
Unlike other herons, this species hunts its prey while hunting in the grass, as opposed to the similar ones that carry out hunts for waiting and attention.
It is more impetuous and usually hunts in packs than the others that are usually intolerant of the proximity of their fellows.
It is attracted by the grazing animals that as soon as Individuano gather around taking up the atavistic habit of merging with each other.
In addition to chasing insects moved by animals, he loves to peck them by removing ticks and parasites that infest their fur.
Then tired of walking and wanting to dry their feathers from the dew, here they sit on their rump and comfortably get carried away while they stretch their wings and do the usual livery toilet.
The cattle egret, as mentioned, is strongly social and always spends its life in the company of its fellows
This species, in Italy, is protected under the law 157/1992. Affected by the expansion of urban centers and the reduction of wetlands.
In Italy, where the species is of recent immigration. The number of mature individuals was estimated at 2374 in 2002 and is increasing over the last 15 years. The species is also increasing throughout its European range and is not subject to specific threats in our country. For these reasons the species in Italy is valued at Less Concern (LC).