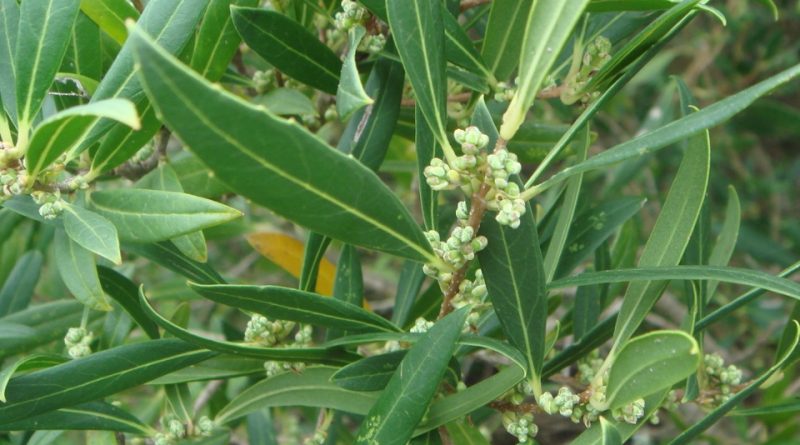 The thin Ilatro (Phillyrea angustifolia L., 1753) is an evergreen tree or shrub species belonging to the Oleacee family.

Systematics –
From the systematic point of view it belongs to the Eukaryota Domain, United Plantae, Magnoliophyta Division, Magnoliopsida Class, Scrophulariales Order, Oleaceae Family, Oleaean Tribe and therefore to the Genus Phillyrea and to the P. angustifolia Species.

Etymology –
The term Phillyrea comes from the Greek φῐλΰρα philýra, the name used by Dioscorides to designate the lime tree and later by Theophrastus referred to a species of the genus Phillyrea. However, the origin of the name originates from Greek mythology. Filira was a sea nymph of such beauty that made Zeus fall in love with Cronos. To satisfy his love, while keeping the companion Rea in the dark, Cronos turned into a horse and made Filira so too. From their union the first centaur was born, Chiron, symbol of a bestial humanity because half man and half horse. Filira was so upset by the consequences of her love that she asked the gods to be transformed into a tree, so it was that the Mediterranean coasts were populated with phillyrea.
Lepiteo specific angustifolia comes from angustus angusto, narrow and folium leaf, lamella: with narrow or small leaves (or leaflets).

Geographical Distribution and Habitat –
The Phillyrea angustifolia is a typical species of the Mediterranean maquis where it grows especially along the Tyrrhenian coast up to 600 m. of quota.
Its habitat is characterized by difficult, drought, even calcareous and sunny soils. 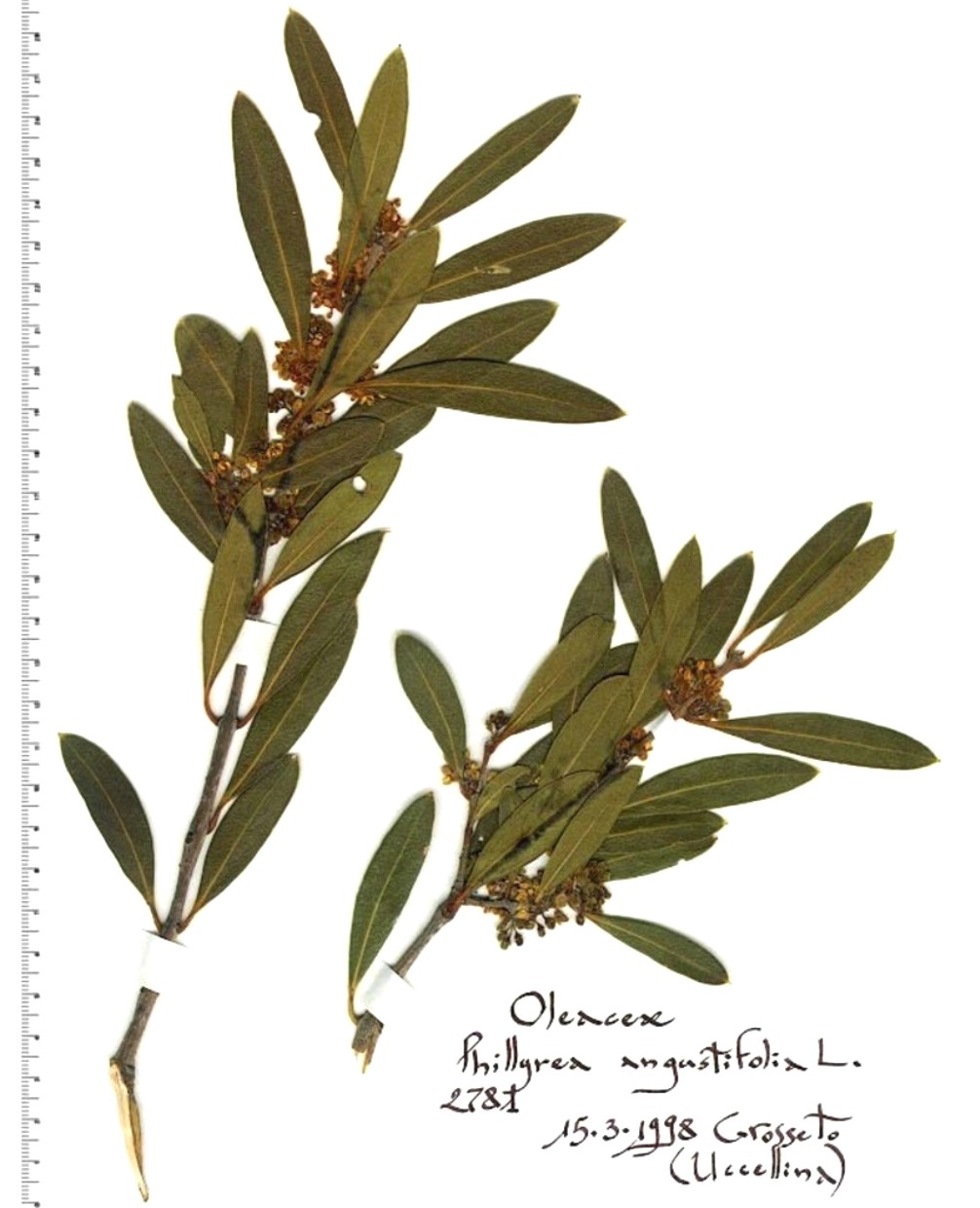 Description –
The thin Ilatro is a species that is arboreal or shrubby and can reach a height of 6-7 m.
It has simple leaves, opposite, evergreen, thin and with less secondary veins than the leaves of P. latifolia.
The flowers are collected in short axillary clusters and are dioecious, small, white in color, with 4 sepals and 4 petals joined together partially in a short tube.
The anthesis is in the period of May.
The fruit is an ovoid or subglobose drupe of 4-6.6 mm, with apiculate apex, blue-blackish at maturity, which generally contains only one seed, with a semi-woody endocarp. The sub-spherical, grainy, brownish seed measures 2-4 mm.

Cultivation –
For the cultivation of the Phillyrea angustifolia it must be taken into account that it is a typically Mediterranean plant and with rather slow growth, especially in the early years.
It adapts to many types of soil, even dry and calcareous, and prefers a sunny exposure.
In climates where in winter you can have frost, it is important that the Phillyrea is positioned near walls or in areas protected from the cold and from the northern winds. The pruning of the Phillyrea angustifolia can be done after flowering, in order to maintain its dense shape.
For multiplication, remember that the plant reproduces by seed but is also propagated agamically by apical cuttings, in spring, preferably in March or by semi-woody cutting in autumn.
The plant supports pruning well and withstands up to -8 / -10 ° C.

Uses and Traditions –
The Phillyrea angustifolia, in Italy, as well as with the name of thin Ilatro, is known by the names of: Fillirea with narrow leaves, Fillirea angustifoglia, Thin lilac, Thin filaria
Due to its morphological characteristics it can be confused with P. latifolia L. subsp. latifolia, which has a similar habitat, which in any case has a fruit rounded at the apex, robust secondary leaf veins and a calyx of the flower with triangular lobes.
The Phillyrea angustifolia is a plant that can also be cultivated as an ornamental shrub due to its decorative berries.
It can be a plant either as an isolated specimen or in a group, in cut or not hedges, in free hedges and in association; also by the sea.
The plant was used in the past in folk medicine, today it is a protected species.

Preparation Mode –
The thin Ilatro, although in the past it was used in folk medicine, today is practically no longer used for these purposes.