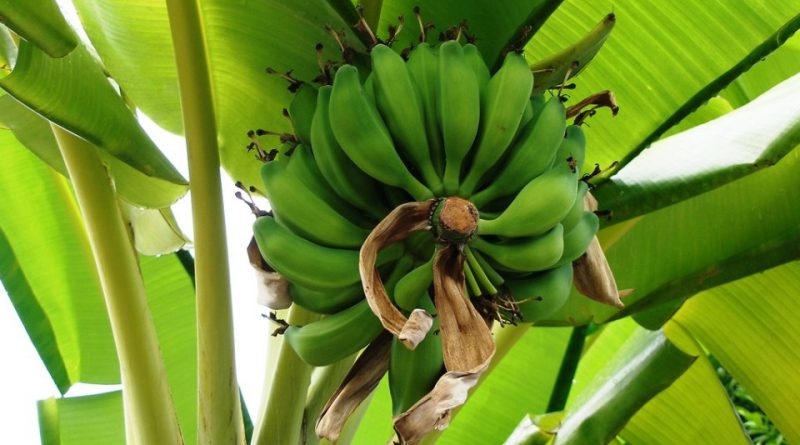 The Platano, also known as green banana (Musa balbisiana Colla, 1820) is a large herbaceous species belonging to the Musaceae family.

Etymology –
The term Musa comes from the Arabic moz or moza banana, latinized by botanists in Musa. According to other authors the name should derive from Antonio Musa, Roman doctor of the first century. B.C..
The specific epithet is in honor of the Piedmontese botanist Giovanni Battista Balbis (1765-1831) who worked in Turin and Lyon.

Geographical Distribution and Habitat –
The Musa balbisiana, in its wild form is found in China (Guangdong, Guangxi, Hainan, Xizang and Yunnan) where it is supposed to have originated; it is also found in India, Indonesia (Java), Malaysia, Myanmar, Nepal, New Guinea, Philippines, Sikkim, Sri Lanka and Thailand. This plant also grows in the steepest parts of the evergreen tropical forests, up to elevations of 1100 m. 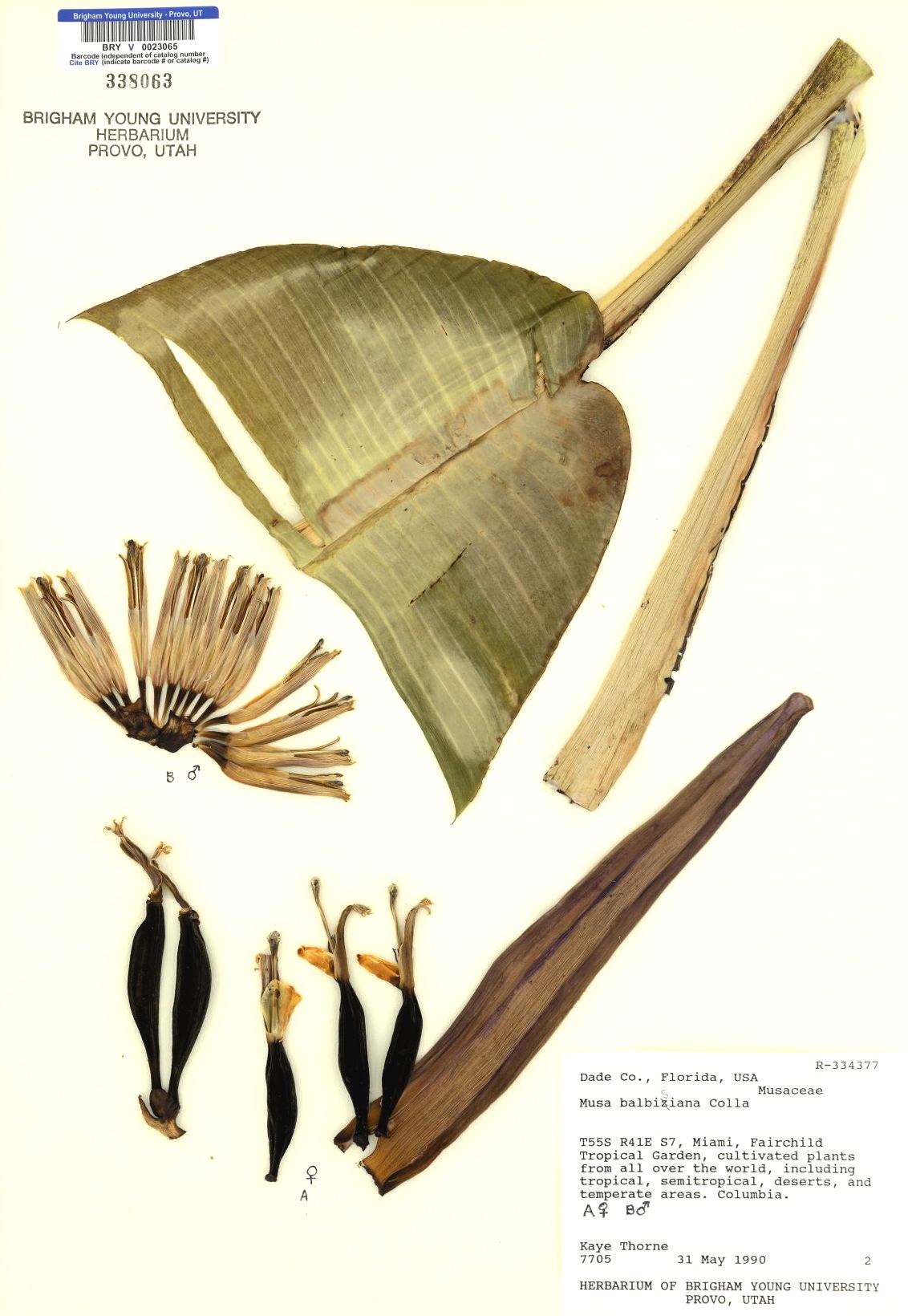 Description –
The Musa balbisiana is a diploid species (in the somatic cells two copies of each chromosome are present), 2n = 22, and is synthetically indicated with BB, where B is its genotype (genetic kit).
It is recognized for having large luxuriant leaves that appear more erect than the Musa acuminata; it is a monocotyledonous herbaceous plant, rhizomatous, cespitose, with a short and underground stem and a pseudofusto, formed by the foliar bases tightly enveloping one another, which can reach up to about 5 m of height and 30 cm of diameter at the base , of greenish yellow color with possible thin blackish spots.
The pseudofusto terminates with a tuft of leaves that are oblong-ovate up to 3 m long and 70 cm wide and over, green in color, sometimes slightly pruinose above, with a prominent central rib on the lower side and thin parallel side veins; the petiole, up to about 70 cm long, is grooved on the top with the edges of the groove closed.
The inflorescence is carried on a glabrous peduncle 30-60 cm long; this is a terminal pendulous spike, up to over 2 m long, with tubular flowers gathered in groups along the floral axis, with each group covered by a thick ovate bract from the obtuse apex, uniformly of a brilliant purple red color on the inner surface, purple and pruinose brown on the outer one, which does not retroflex after opening.
The bracts of the female flowers are deciduous, those of the persistent male flowers; the scars, traces of fallen bracts, are not prominent.
The flowers are feminine at the base and gathered in about 8 groups with up to 16 flowers each arranged in two rows, followed by an area of ​​hermaphrodite flowers, generally deciduous, with aborted male and female organs, followed in turn by the male ones, until at 20 for bract, arranged in two rows, cream-colored suffused with pink. The flowers take on a color that varies from red to burgundy.
After the flowering the pseudofusto dies, but from the rhizome new suckers continue to produce.
The fruits are found on a peduncle 1-2 cm long; these are angular obsoid berries of 13 x 4 cm, waxy, with gray-green-blue coloring, sometimes tending to yellowish at full maturity; these contain numerous globose seeds, of 4-8 mm of diameter, of brown color immersed in a whitish pulp rich in starch; these due to the presence of the numerous seeds and also to the lack of pulp, are considered little or not edible.
In any case, due to the polyploidy also naturally parthenocarpic clones appear which therefore produce edible bananas.
In this plant pollination is mainly carried out by bats, nectarines and bees.

Cultivation –
The Platano is a plant that easily reproduces by suckers with roots, by division and by seed, in substrate with 50% sand or agriperlite kept humid, which germinates in 2-6 weeks at the temperature of 22-26 ° C and in full light; times can be reduced by keeping the seeds in water for 3-4 days or by scarifying them beforehand.
The species is cultivable in the tropical and subtropical areas in full sun on fertile, draining, sub-acid or neutral soils, rich in potassium and magnesium, periodically fertilized, with plenty of water to grow at its best, even if it can withstand dry periods, such as they occur in the monsoon climates, albeit with a slowing of the vegetation, a characteristic that also gives to its hybrids.
Cultivation can be attempted in warm temperate zones, with longer growth times; regarding the behavior at low temperatures, the vegetation stops around 10 ° C, the leaves are destroyed around -2 ° C and the whole aerial part at about -4 ° C, but revegetating from the rhizome in spring.
The plants, due to the large leaf surface, are very sensitive to the wind, which spoils the leaves and can even break the pseudo-stems or uproot the entire plant.
Growth times vary according to tropical or subtropical climate, variety and cultivation conditions, from 6 to 12 months until the inflorescence emerges, and 3-10 months from this to harvest. Among the interventions to be carried out in the cultivation of the varieties and hybrids, it is necessary to remove the suckers, produced with continuity, to prevent them from competing with the mother plant, leaving only those that serve to ensure the continuity of production, useful for cutting the male part of the inflorescence, to convey all the resources of the plant in the formation of fruits.
The reproduction of sterile and hybrid varieties occurs naturally only by division, or rather by means of root suckers, there are two types, those with a large initial leaf, which arise from the superficial buds of the rhizome, and those with an initial leaf lance-shaped from the buds. deeper, for reproduction the lanceolate leaves are preferred for their greater vigor.
On an industrial level, micropropagation is increasingly used, which is able to provide plants with uniform characteristics and free from viruses and other diseases.

Uses and Traditions –
The Musa balbisiana must have an ancient use and therefore cultivation, even if the fruits are not edible we can suppose that in ancient times these fruits were somehow used for human nutrition, otherwise it would have been difficult to get to the domestic banana. As mentioned, among other things, due to polyploidy also naturally partocarpic clones appear which therefore produce edible bananas.
The wild form of Musa balbisiana, unlike its cultivars that can be multiplied only by division of the tuft and micropropagation, also reproduces by seed. Plants that have fruit with seeds are called “butuhan” “with seeds” in the Philippines.
In Thai folklore it is believed that this type of banana is inhabited by a spirit, Nang Tani, a type of ghost tied to the tree that showed itself in the appearance of a young woman. Because of this, people often tie a small piece of satin fabric to the trunk of the banana tree.
There are more than a thousand cultivars obtained from hybridization with M. acuminata, which produce most of the commercially edible bananas.
The species, whose fruits are considered inedible due to the presence of the numerous seeds, outside the areas of origin is cultivated in botanical gardens and, to a limited extent, for ornamental purposes due to the large leaves and the colorful inflorescences, but has a great importance in studies for the genetic improvement of edible bananas being, as is known, one of the two progenitors (the other is the Musa acuminata) from which many descend.
In the hybrids between the two species (Musa acuminata × Musa balbisiana), called botany Musa × paradisiaca L. (1753), already present in the spontaneous state in remote times, the species confers some of its characteristics, in particular a greater resistance to dry, to diseases and low temperatures.
The hybrids are conventionally designated with the letters that symbolize the genotype (A for the Musa acuminata), then a diploid hybrid with AB, triploid with three letters, AAB and ABB, and tetraploid, AAAB, AABB, ABBB.
Where the genetic make-up of the acuminata (A) prevails, the fruits are generally suitable for fresh consumption, where the balbisiana (B) prevails, consumed after cooking, due to the presence of starch which is only minimally transformed into sugars when ripe. ; the former are the classic “bananas”, the latter are called “plantains” and “plane trees” in Central and South America (in Spain and Mexico “platano” is used for the two types). Among the diploid varieties’ Ney Poovan ‘(AB) is suitable for fresh consumption, as well as the triploid’ Lady Finger ‘(AAB), while triploids’ Horn Plantain’ (AAB) and ‘Bluggoe’ and ‘Topocho are to be eaten cooked. Verde ‘(ABB), as well as the tetraploids’ Klue Teparod’ and ‘Tiparot’ (ABBB).
Finally, diploid, BB, and triploid, BBB, sterile forms have also been selected, naturally suitable for consumption after cooking, of which the most cultivated is the ‘Saba’ variety.
The fruits of the sterile and hybrid varieties where its genetic make-up prevails (B), destined therefore to consumption after cooking, are marketed almost exclusively at local level, in fact only 15% of the entire world production (2010) of all varieties and hybrids is intended for export, consisting almost exclusively of varieties intended for fresh consumption belonging to the Cavendish group of the Musa acuminata.
In addition to the fruits, in some localities also the male inflorescences are consumed, such as vegetable, and the leaves used as fodder for livestock; in the south of Japan the fibers obtained from the pseudofusto are variously employed.
The leaves of this banana are often used in Thailand to wrap local sweets and the inflorescences are used in traditional medicine for the treatment of ulcers.
The plane tree is among the exotic fruits that should be integrated into our diet because:
– it is a natural remedy for gastritis and intestinal inflammation;
– reintegrates vitamins (A, C, B, B6 and K) and mineral salts such as magnesium, potassium, copper, phosphorus and sodium;
– it is very nutritious and is recommended for those who practice sport and for those who are in the process of rehabilitation from an illness;
– helps intestinal regularity and correct metabolism;
– combats exhaustion and cramps;
– keeps bones healthy and strong and prevents deterioration caused by aging.

Preparation Mode –
The plane tree can be eaten boiled or fried and its flavor is similar to that of the potato. For many cultures of Latin America, West Africa and the Caribbean islands it is a food of first necessity because it is dried and ground. In this way, a flour is made to prepare bread that can be replaced in the diet of people with celiac disease.
The plane tree is consumed as a chip-shaped snack or can be grilled with the addition of caramel; it can be used to prepare low-calorie desserts, in soups instead of potatoes or to prepare baked goods for those suffering from celiac disease.