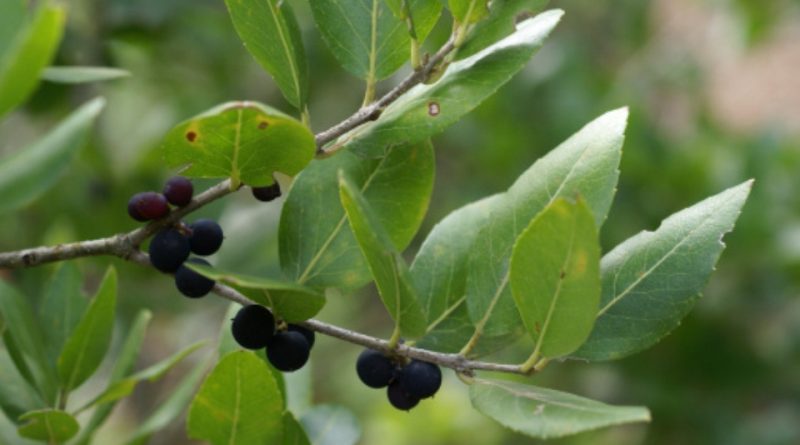 The green olive tree (Phillyrea latifolia L.) is a shrub or small tree species of the Oleacee family.

Systematics –
From the systematic point of view it belongs to the Eukaryota Domain, United Plantae, Magnoliophyta Division, Magnoliopsida Class, Scrophulariales Order, Oleaceae Family, Oleaean Tribe and then to the Genus Phillyrea and to the P. latifolia Species.

Etymology –
The term Phillyrea comes from the Greek φῐλΰρα philýra, the name used by Dioscorides to designate the lime tree and later by Theophrastus referred to a species of the genus Phillyrea. The specific epithet latifolia comes from latus largo, extended and from fólium foglia: with broad leaves, referred to the leaflets.

Geographical Distribution and Habitat –
The green olive tree is a native species of the Mediterranean basin and typical of the Mediterranean maquis which, due to its cultivation since ancient times, grows in a very extensive geographical area. Its habitat is that of mild and sunny climates where it grows up to an altitude of 800 m. In Italy it is present in all regions except in the Valle d’Aosta and Piedmont and more common in the Center-South. 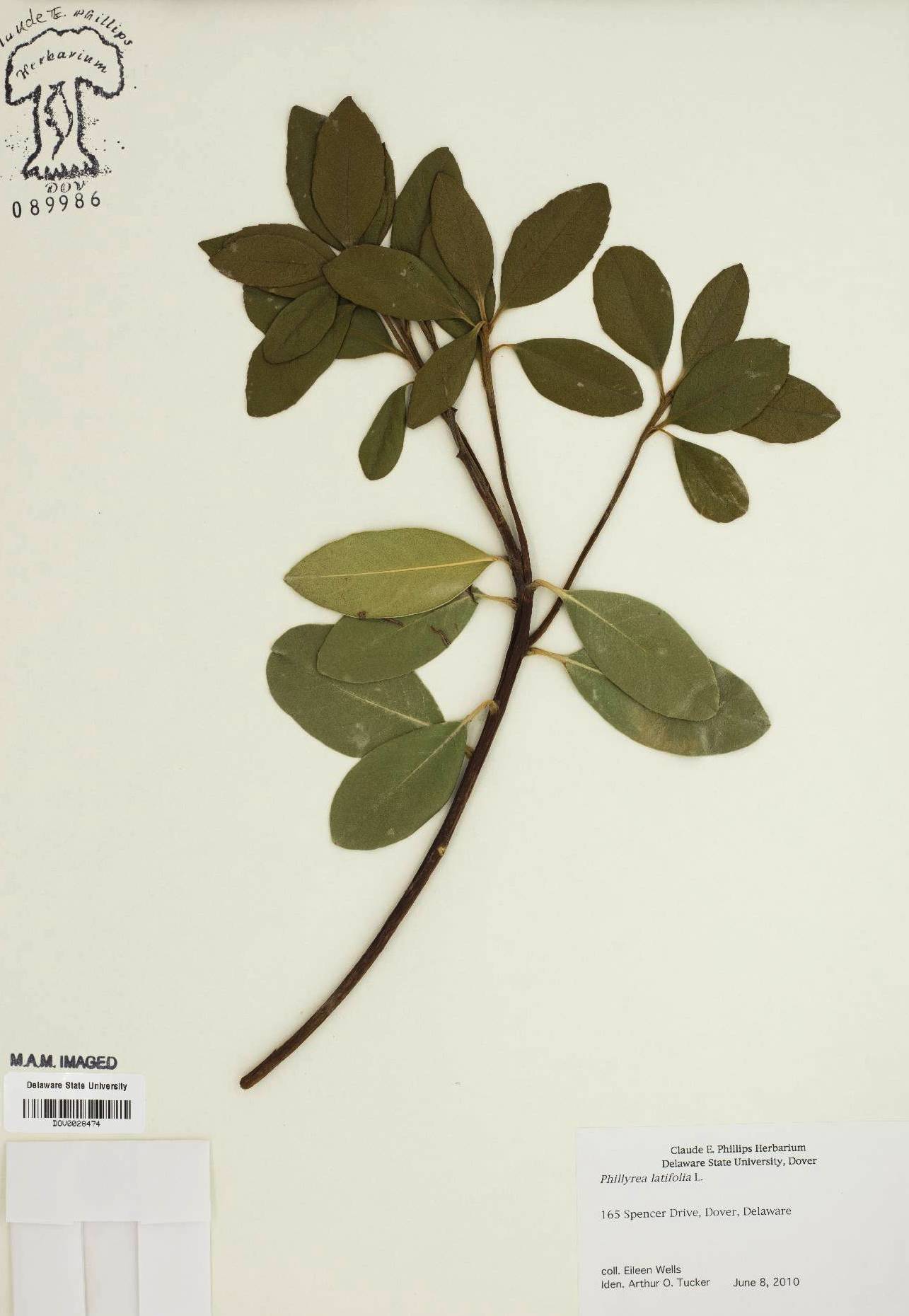 Description –
The Phillyrea latifolia is a shrub or tree that generally reaches no more than 5-6 m. It has a more or less smooth bark depending on the age, of ash gray color; persistent and opposite leaves, oval and elongated, coriaceous, dark green above and silvery below.
The flowers are dioecious, small, white, with 4 sepals and 4 petals joined together partially in a short tube. The flowers are collected in short axillary clusters.
The fruit is a globular drupe of 4-6.7 mm, blackish blue, apiculate, normally with a spherical seed, of 2.5-4 mm, grainy, brownish, with woody endocarp, almost smooth.
The anthesis is in the period between March and April.
It is a very long-lived plant and has an exceptional ability to reproduce itself from the stump, so it recovers quickly if damaged by fire.

Cultivation –
The green olive tree is a plant that multiplies by offshoots that, made in autumn, take root in the second year and can be planted in the third year.
However, for their cultivation it is good to choose a sunny area; they tolerate frost very well, even intense, although it is advisable to place them in an area not subjected to strong winter winds, especially in areas of Italy where the minimum winter temperatures can drop below zero for a long time. Although they can stand the cold very well, in some Italian regions they are grown in pots, so that they can easily be covered, or moved, in the case of snow or very intense and persistent frosts; in general, frost damage is more likely when the plant is kept in very wet soil.
Before planting the plants it is advisable to work the soil well, lightening it with sand or pumice stone, so as to make it very well drained.
Plants, especially if they have been at home for a long time, tend to tolerate drought well, even during the warm months.
So in general it is a low-maintenance garden shrub that tolerates frost and winter cold, as well as summer heat and drought; it is cultivated more or less like the olive tree, and therefore needs protection only in areas with very, very rigid, or very wet winters.

Uses and Traditions –
The green olive tree, also known by the names of: Common Ilatro, Fillirea with broad leaves, Fillirea latifoglia, Filaria comune, Lilatro is one of the most typical components of the Mediterranean maquis, and is often cultivated for ornamental purposes in parks and gardens where it is used even in hedges. Wood is used as a fuel.
Its wood is hard and compact, so it is used for cabinet-making, inlay and lathe work, and also as firewood. The leaves are very popular with cattle and were once used to prepare an infusion against fever. With the bark, in the past, the fabrics were colored yellow.
In the past it was used as a graft holder for the olive which gave it greater rusticity and resistance.
The leaves of the Phillyrea latifolia contain a glucoside (fillirrina) with tonic-astringent and diuretic properties when used as a decoction or tincture. In the southern areas of the Mediterranean it is used for oropharyngeal anti-inflammatory properties; the leaves have known anti-inflammatory effects and contain flavonoids. The aqueous extracts, boiled and not, have hepatoprotective effects; Jordanian folk medicine used the aqueous extracts of this plant in the care of jaundice. In addition, leaf extracts show the presence of antioxidant substances such as alpha-tocopherol.
The Phillyrea latifolia is used in forest nurseries for reforestation in areas with typically Mediterranean vegetation.

Preparation Mode –
From the leaves of the green olive tree it is possible to prepare infusions that have known anti-inflammatory effects and can therefore also be used against febrile syndromes.