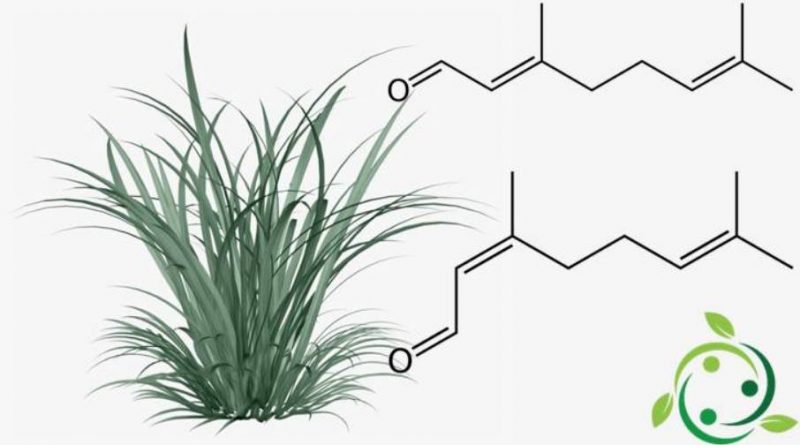 The citral, whose term in the official IUPAC nomenclature is: 3,7-dimethyl-2,6-octadienal and whose brute or molecular formula is: C10H16O is a non-saturated aldehyde contained in various essential oils (verbena, lemon, etc.). ).
The citral is the common name of the mixture of the two isomers of a monoterpenic aldehyde: the E (or trans) isomer is called hieranial (or citral A), the Z (or cis) is called nerale (or citral B).
The citral is the main component of the essential oil of Lemongrass (Cymbopogon citratus (DC.) Stapf. And C. flexuosus Stapf.).
This oil is widely used as a base for some chemicals for perfumery such as citronellal, citronellol and geraniol; chemicals that are widely used in the production of soaps, perfumes, cosmetics and aromas all over the world.

It is also used in organic syntheses for the preparation of vitamin A, ionone and p-cymene to mask the smell of smoke.
The citral, at a temperature of 20 ° C and barometric pressure, appears as a volatile liquid, yellow, with a strong lemon odor, insoluble in water.
This compound can be obtained by oxidation of geraniol or nerol with chromic acid.
The citral, due to its sensitizing potential, is included in the list of 26 fragrances considered allergenic, which by law must be listed on the label when their percentage exceeds 0.001% in leave-on products and 0.01% in products from rinse.
For this reason, given its potentially sensitizing power, it is generally not used in cosmetic products intended for particularly sensitive or atopic skin.