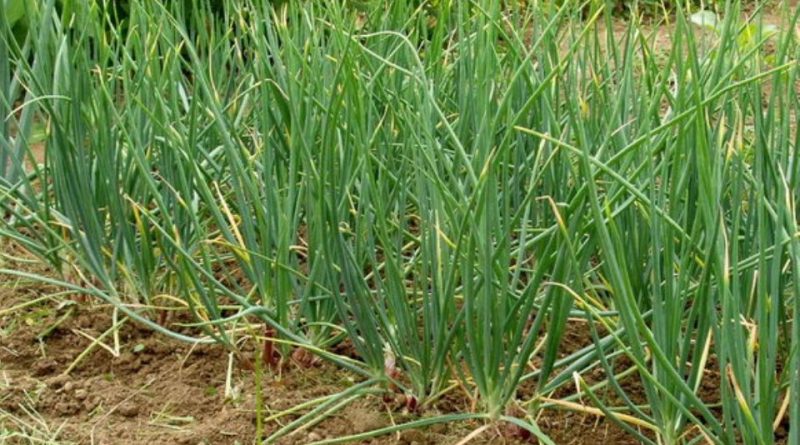 Shallot (Allium ascalonicum L.) is a herbaceous species of the Liliaceae family.

Systematics –
From the systematic point of view it belongs to the Eukaryota Domain, United Plantae, Magnoliophyta Division, Liliopsida Class, Liliales Order, Liliaceae Family and therefore to the Genus Allium and to the Species A. ascalonicum.

Etymology –
The term Allium comes from alium garlic, mentioned by Plautus, Pliny and others (of uncertain origin, probably from the Greek ἄγλῑς áglis head of garlic; the Webster Dictionary, based on the Asian origin, proposes a possible link with the Sanskrit root āluka edible of Amorphophallus campanulatus; for A. Gentil it would derive from the warm Celtic, burning, due to its characteristic taste.The specific epithet ascalonicum derives from Ascalona, ​​ancient city of Palestine south of Tel Aviv.

Geographical Distribution and Habitat –
The Allium ascalonicum is a plant native to the Middle East, so much so that the scientific name of the species, ascalonicum, derives from Ascalon, an ancient city in Palestine where it is believed to have originated and where it was in fact widely cultivated.
Today this species is cultivated practically all over the world. 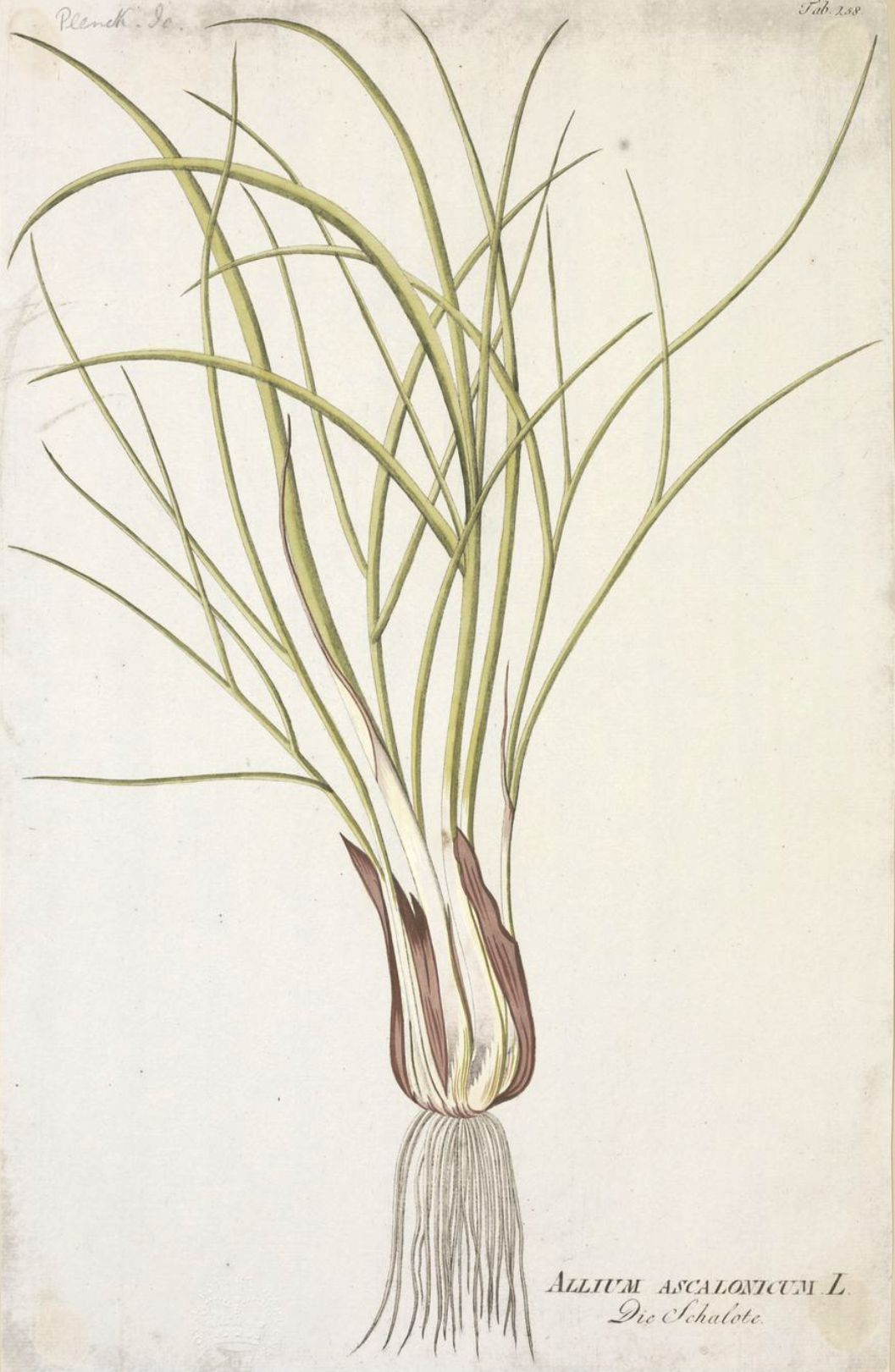 Description –
Shallot is a plant that can reach 20-30 cm in height.
It has cylindrical leaves, with a composite bulb (not unique), tunicate, like that of the onion, but smaller, often composed of two or three smaller cloves united in a single tunicate bulb slightly larger, on the whole slightly more tapered than the onion. This bulb normally has a weight that varies from about 5 to 25 grams and which, depending on the variety, differs for the color of the outer sheaths (purple green, red, red-brown, pinkish red, purple, yellow, gray and white ), of their shape (spherical, rounded and elongated) and finally of the taste, very influenced also by the cultivation area.
It has an inflorescence that, when it manifests, in some specially selected varieties, of an umbrella shape, and produces small and black seeds.
Reproduction, due to the difficulty of going to seed, is normally vegetative.

Cultivation –
Shallot is a resistant vegetable plant, which does not require special care to grow well. It must be considered however that one cannot however cultivate in succession to himself or to other Liliaceae, nor Solanacee, beetroot or cabbage.
To plant this plant on the same plot you have to wait at least 5 years. It is planted through the cloves in the period between November and December, while the harvest begins in mid-June, for the product to be consumed fresh and from the second half of July for the product to be conserved and transformed.
After the extirpation of bulbs, they are dried and stored. Shallots should be stored in a cool, dry and well-ventilated area. It must be avoided to keep it in the refrigerator and to store it in waterproof packaging which favors its decomposition; can be stored in the freezer.
The shallot, based on the color of the peel, is grouped into different varieties grown in Europe:
– Rose. The most important of these varieties is the most sophisticated Jersey shallot, which has a swollen spherical bulb (short and rather broad), a peel from copper to pink, a veined pulp and a slightly spicy aroma; other varieties are the Pesandor and the Rondeline;
– Grey. Famous is the common shallot variety, which has a small elongated bulb, gray sheaths with a purple head, a firm pulp and a pungent aroma; common varieties are the Griselle and the Grisor.
– Yellow. Typical Dutch ones that have a relatively rounded and short bulb, among the most similar to the onion;
– reddish brown. The most widespread in Italy is certainly the Scallion of Romagna, a PGI product (since 1997) cultivated since the beginning of the 20th century in the areas between Faenza, Forlì and Imola, which has slender leaves, a sometimes twisted bulb-shaped flask, an apparatus well developed root, dark golden or coppery sheaths, a pink-lilac hue and a spicy flavor. Other varieties are the Arvro, the Germor and the Longor;
– The shallots grown in Asia are generally red or purplish-red. In southern India the most popular varieties are particularly small (about the width of a finger).
– In southern Louisiana, the cultivation of a variety of white giant shallot (giant white shallot) is widespread, which is actually a cross between shallot and winter onion (Allium fistulosum).
For the technique of organic cultivation of shallots consult the following card.

Uses and Traditions –
Allium ascalonicum, with a flavor halfway between garlic and onion, although more delicate, was once the poor companion especially of the Romagna peasants.
Its cultivation has been known for at least 3000 years and was already in use among the Roman peoples.
According to some scholars, the shallot was brought to Europe by the peoples who migrated from the Middle East, including the Celtic populations. In fact, the term allium is a Celtic word that means “burning”. Mentioned since ancient times – the quotations of Ovid and Boccaccio are celebrated – the shallot is therefore the protagonist of a millennial history, peasant and rural: in the Liber de Coquina written in the XIII century. at the Angevin court in Naples, it is indicated as an ideal condiment for meat and as a substitute for onion, leek and garlic.
This vegetable has numerous therapeutic properties. It is good for nails and hair: when eaten raw, the shallot retains its therapeutic properties and brings benefits to hair nails contributing to their strengthening.
Antioxidants: it has a good content of antioxidant compounds, in addition to vitamins it contains quercetin and kaempferol, two substances that are released when the shallot is crushed and which in turn produce another substance, allicin. This compound seems to be able to intervene effectively on some types of tumors such as the lung, the stomach, the colon and the breast.
Antitumorals: according to the University of California, diets rich in foods belonging to the Liliaceae family are associated with a lower risk of developing tumors.
Cholesterol: allicin also has another very important property for our health, it is also able to lower the levels of bad cholesterol in the blood with beneficial effects in the prevention of arteriosclerosis and heart disease like heart attack and stroke.
Lowers pressure: potassium and allicin, combined together, have beneficial effects on hypertension. Potassium is an electrolyte with vasodilatory properties and is therefore able to relax the walls of blood vessels allowing a greater flow of blood. Allicin instead releases nitric oxide in the body which reduces blood pressure.
Diabetes: sulfide allyl in this vegetable has useful properties to regulate blood sugar levels, the consumption of shallots is therefore recommended for those suffering from diabetes.
It is good for the brain: the shallot contains folic acid which is essential for the proper functioning of the brain and for mental health.
Pregnancy: in the right doses folic acid is also important for pregnant women as it prevents neural tube malformations in babies who are born.
Like many plants, shallots are predominantly composed of water. To this and to the fibers are added oligonutrients essential for a good functioning of our body, to which the possible beneficial properties of this bulb are attributed: the shallot is rich in sodium, potassium, calcium, phosphorus, selenium, silicon.
Selenium (Se) is an element that binds well with the sulfur of which the shallot is rich, and is present in many tissues of our body: it is important for growth, has an antioxidant action and is therefore attributed properties anti aging.
The good content of silicon (Si) would instead make the shallot useful against osteoporosis and for strengthening nails and hair, given the relationship between the latter and calcium.
Good intake of vitamin C (although it must be considered that to assimilate it to the best, shallots must be eaten raw, since cooking destroys it), as well as vitamin A, and the vitamins of group B.
In scientific literature it has been reported that shallots contain more flavonoids and phenols than any other member of the onion family. Among the flavonoids, vegetable substances and antibiotic action, anthocyanins appear in particular, substances that confer the violet color to the bulb, very useful for capillaries and circulation in general, and quercetin, a molecule studied in the experimental oncology and pressure regulating field. diastolic (the minimum).
The volatile components responsible for the aroma are instead held back by the sheath that envelops the bulb, and are activated when it is incised. The enzyme allinase, which is part of the defensive system that the plants of the genus Allium adopt to combat herbivores, is responsible for the catalysis of the chemical reactions involved in the production of the volatile compounds that give these foods the characteristic aromas, odors and tear-producing properties. Particularly among the latter is the allyl sulfide, a volatile thioether that has a diuretic effect, as well as a disinfectant (vermifuge and bactericide). Due to its potential disinfectant effect, in Indian tradition the shallot, mixed with sugar (even unrefined, like jaggery), is used as a home remedy for sore throat.

Preparation Mode –
The shallot is consumed mainly in the natural state or in the preparation of raw salads, sauces, omelettes, in oil and pickles. Because of its delicate and characteristic aromatic contribution, it is used in the kitchen to prepare appetizers and serving dishes.
But of the scallions there are interesting recipes of which only a few are reported in summary.
The shallot can in fact be prepared fried or crunchy, or in brine, with sugar, red wine vinegar and a bag of fresh herbs or, finally, the caramelized shallot, where the carefully cleaned bulbs are sliced ​​in a large pan over medium-low heat, adding a few tablespoons of melted butter. The preparation involves re-mixing from time to time, for a maximum of 10 minutes, until golden brown. Using a metal fork or ladle, then transfer the caramelized shallot to a plate covered with a paper towel, then season with salt and pepper to taste.