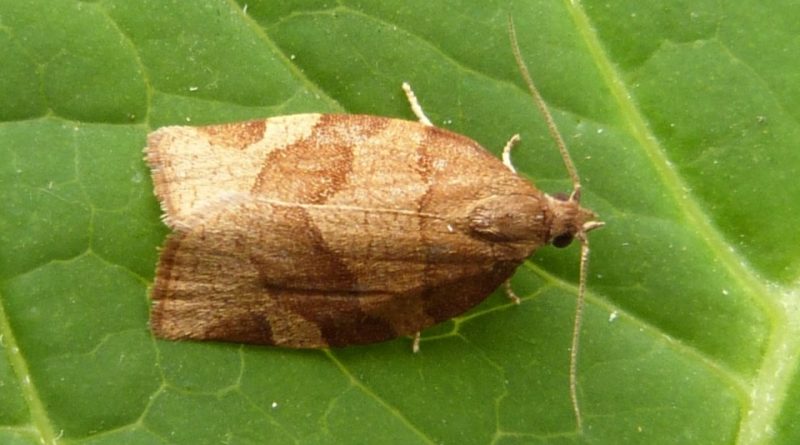 Geographical Distribution and Habitat –
Pandemis cerasana is a fairly common and widespread moth; it is found in Europe, from the Iberian peninsula to the Urals and the Caucasus, south of Siberia, Kazakhstan, Mongolia, China and the Far East. It is also found in Asia Minor and in Iran. It is also a species that was introduced into North America.
Its habitat is linked to the presence of ornamental apple, pear, stone fruit and deciduous trees. 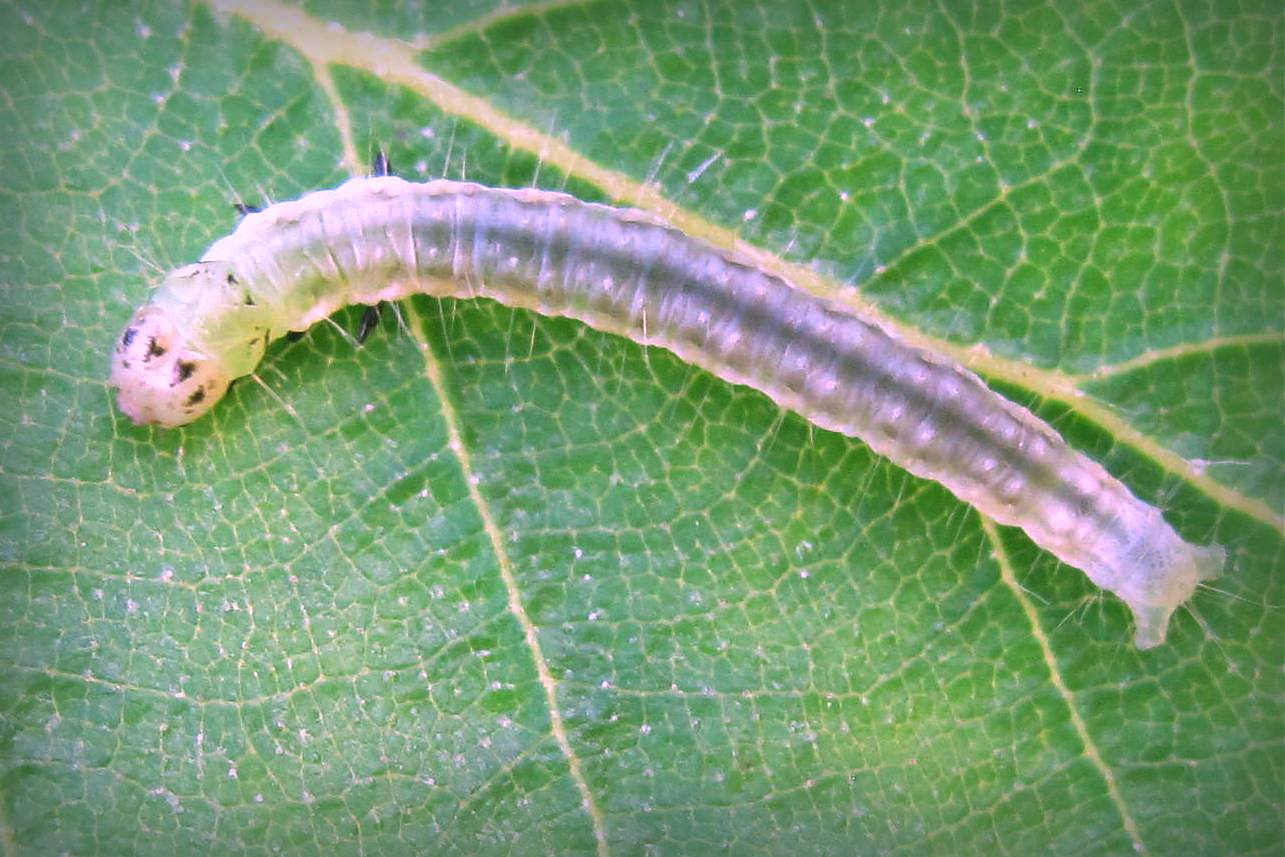 Morphology –
The barred fruit-tree tortrix is recognized for having a wingspan that can reach 16–25 mm, with ocher-colored front wings; the livery is completed with a band near the head, a transversal band and the distal margin light brown.
The hind wings are almost uniform of grayish brown color. The outer margin of the wings is sinuous and slightly oblique.
Males are distinguished by having antennae with a notch near the base.
These moths usually rest with their bell-shaped wings in a flattened position.
The larvae can reach a length of about 20 – 24 millimeters, of brownish green color, with a thoracic plate of the body color, which can be spotted of brown in its posterior half.
The eggs are laid in oviplaces of a yellow-colored color, indifferently on both sides of the leaves.

Attitude and biological cycle –
Pandemis cerasana is a moth that can be seen flying, from sunset to night, in the period from June to August.
These moths hibernate at the stage of young larvae, both in the gorges of the bark and in other shelters, obtained with dry leaves, at the base of the plants or on the same.
Once in the spring period, between March and April, the first damage occurs, on the buds or on the flower bunches, due to the wintering larvae; these, once they reach maturity, are incrisalidano between the leaves that bind and roll with characteristic silk threads.
Adults flutter normally from the second decade of May until the first half of June, with peaks of flicker towards the end of May. From the oviposition of these the generation with larval activity is originated in the months of June-July. The adults that originate from the second generation begin to fly between July and August and give rise to the larvae destined to winter. This species then makes two generations a year.
The first and second generation larvae are polyphagous and feed on various deciduous trees and shrubs, such as: Abies, Alnus, Acer, Betula, Crataegus, Fraxinus, Quercus and fruit trees and shrubs, including: apple and pear, hazel, cherry, plum, currant, blackberry and raspberry.
The damage, as for other embroidering insects, is due to the trophic activity of the larvae that attack buds, flowers, leaves and small fruits in the following ways:
– the wintering larvae produce characteristic erosions on buds and flower bunches that can be damaged until they are completely destroyed. Subsequently they attack the small fruits with typical erosions, more or less deep, which can cause the fruit to fall; in any case the fruit is blocked in its development, or its growth is irregular resulting in depreciation;
the larvae of the following generations attack:
– the leaves, with irregular erosions of the parenchyma;
– fruits, even if already formed, with characteristic superficial erosions resembling embroidery (hence the name of embroiderers); these fruits are depreciated even if the rosures are superficial; the irregular erosion suberify and remain as an indelible sign of the attack.

Ecological Role –
Pandemis cerasana is a moth that lives at the expense above all of plants like Apple trees, Pear trees, Stone fruit trees and ornamental broadleaf trees.
For the containment of this moth it is necessary to follow the methods of guided and integrated control and to follow agroecological measures to avoid excessive cultural specializations and the lack of herbaceous and arboreal consociations.
These devices are necessary to decrease the population density of this insect and to increase the presence of the natural enemies of this moth.
Among these we mention the Calcidoidei and Braconidae Hymenoptera; among the very important Calcidoidei are the Trichogramma which are active on the eggs. Finally the Diptera Larvevorids whose larvae parasitize in general the larvae of the Tortricidae.
In order to assess the moment and the intervention threshold, which occurs both through sampling and monitoring with sexual traps, all the embroiderers are considered in a cumulative way (with particular reference to the Pandemis cerasana and the Archips podanus).
Environmental sampling must be carried out in spring to evaluate the activity of the wintering forms on buds and flower bunches.
In prefioritura (for the wintering generation) the threshold is 15-20% (in some cases lowered to 5%) of infested shoots.
From flowering, for subsequent generations, the threshold is 5% of infested buds / bunches; if no action is taken first, the petals may fall with the same products. After these interventions, carried out according to the indications emerging from the samplings, all the other treatments can be performed by evaluating the thresholds using sexual traps. The monitoring methodology is the following:
– the traps must be mounted towards the beginning of May;
– the number of traps is one per hectare or two per farm;
– if only Pandemis is considered, the intervention threshold is 15 adults captured by trap in 1 or 2 weeks;
– if instead we consider both the Pandemis and the Archips, the cumulative intervention threshold is 30 adults captured in the two traps in 1 or 2 weeks.
The intervention threshold for the 1st and 2nd generation, especially against the wintering larvae, can also be evaluated with a sampling of infested shoots / organs and is equal to 5%.
Furthermore, if we consider the flight thresholds of the traps against the larvae of the generation (June-July) we intervene, after about two weeks from exceeding the threshold, with Bacillus thuringiensis ssp. Kurstaki, with at least two treatments.
Against the larvae of the 2nd generation, after about a week, the threshold is exceeded.