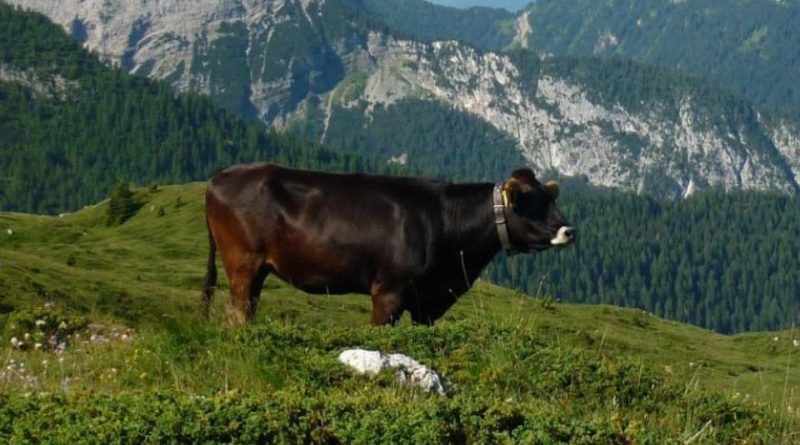 The Rendena, also known as Tiroler Rendenavieh, is a bovine breed (Bos taurus Linnaeus, 1758) autocotna of the alpine regions originating from the homonymous Trentino valley with dual aptitude.

Geographical and area distribution –
The Rendena cattle breed is mainly found in an area between the provinces of Padua, Trento, Vicenza and Verona, although some farms are located in other provinces of Lombardy, Veneto, Emilia-Romagna and Liguria.
The Rendena breed is one of the 11 breeds that adhere to the European Federation of Breeds of the Alpine System (Abondance-France; Grigio Alpina-Italy; Herens-Switzerland; Hinterwälder-Germany; Pinzgauer-Austria; Rendena-Italy; Tarentaise-France; Tiroler Grauvieh -Austria, Valdostana-Italy, Vordelwälder-Germany, Vosgienne-France).
Every year, in Pinzolo (Val Rendena), during the end of summer, the National Show of Rendena Heifers is held.

Origins and History –
La Rendena is a native breed with origin in the valley of the same name in Trentino.
The origins of this breed are linked to the ancient farming traditions of this area. The first documents on the type of cattle raised are dated at the beginning of the XVIII century and the origin of this breed is linked when at the beginning of the eighteenth century the bovine plague coming from Eastern Europe spread in Val Rendena had almost cleared the local zootechnical heritage.
Thus, at that time, the first substantial imports of livestock from Switzerland began, which when crossed with the indigenous cattle that survived the epidemics and subsequently selected gave rise to the current Rendena breed.
The first substantial documented import of cattle purchased mainly in some Swiss valleys dates back to 1712. It was not an import of brown cattle, but of subjects referable to one of the types of cattle raised in southern Switzerland, probably chosen by the farmers of the Rendena valley for their affinity with the characteristics of their native cattle.
Thus the imported cattle merged harmoniously, due to their similarities and productive characteristics, with the indigenous cattle, present for centuries in the valleys of western Trentino. Imports of cattle from Switzerland probably ceased before the end of the eighteenth century, as the need to resort to further repopulation no longer existed.
In fact, according to documents of the time, the epidemics of cattle had stopped around the mid-eighteenth century and that at that time had followed an era of relative well-being and tranquility, during which the local populations were able to resume their breeding activities and cattle trade with the plain, in particular with Lombardy.
During the nineteenth century, in the area the breed reached a consistency valued in more than sixteen thousand heads. The production address was based on milk production and breeding of young animals from comebacks that were exported to other breeding areas of the Kingdom of Italy (pregnant heifers were purchased in numerous northern provinces but also in Florence and Rome).
So it was that this breed, soon, spread especially in northern Italy, especially for its marked aptitude for the production of milk, and reached, towards the end of the 800, the consistency of over 800,000 heads bred.
Subsequently due to the wars and the fascist laws the populations of this race were reduced to a few thousand heads.
In fact, starting from the early 1900s, the situation of the Rendena breed deteriorated due to inappropriate criteria that promoted the crossing of the bruna substitution and reduced its consistency to a few thousand head.
The merit of the survival of Rendena is due to the Trentino and Veneto breeders who, thanks to their convictions, continued clandestinely to reproduce this breed in purity by meeting, at times, even with penal consequences. Discrimination against Rendena and its breeders ceased in 1978 when the Ministry of Agriculture and Forests at the request of the Veneto region authorized their pure breeding. From here followed a series of steps that led, in 1981, to the establishment of the National Association of Bovine Breeders of Rendena Breed, later recognized by the Ministry of Agricultural, Food and Forestry Policies.
Today the Rendena breed is slightly expanding after the decrease observed up until the 1980s. In total, around 13,000 animals are bred, of which 7,000 are controlled animals.
Nowadays, the Rendena, a native breed that for centuries has been the cornerstone of the zootechnical and agricultural activity of the Val Rendena, an ally of mankind in protecting the territory and shaping the landscape with the distinctive and strongly identifying trait of high mountain pastures, has become a Slow Food Presidium.

Morphology –
The Rendena breed is distinguished by having a chestnut-colored coat with different shades, with darker bulls, even almost blacks.
The hair is smooth; row mill with lighter lumbar strip. The mucous membranes are black as well as the muzzle surrounded by a white halo. There is a cuff of ivory hairs inside the ear pads.
The horns are light, white and black at the tip.
In general they are harmonious animals with medium-small size and stature. The height at the withers is approximately 130 cm with a weight that varies between 500 – 550 kg

Production aptitude –
Rendena is a dual-purpose breed with a prevalence of milk.
The yields of young cows that spend 100 days or more on high pastures are on average 4733 kg per lactation; milk has 3.50% fat and 3.36% protein.
This is an extremely positive figure since this production is obtained with minimum intake of concentrated feed, even in difficult and marginal areas, and with 70% of cows still grazing for 100 or more days in the summer period.
The cows that remain stable throughout the year, especially in the lowland areas, produce about 6000 kg per lactation.
From the milk of the Rendena breed a typical Trentino cheese is produced called Spressa delle Giudicarie.
As far as meat production is concerned, Rendena supplies calves under study which are in great demand on the market, as well as bullocks of 400 – 450 kg at the age of 12 – 13 months.
The bullocks have yields of around 58-60% and a very good quality of the carcasses with an average EUROP rating = R. It should be emphasized that these meat productions, as well as milk production, are obtained with low costs which allow competitive net incomes .
In general the rusticity of Rendena makes this breed particularly suitable for the exploitation of pastures, even the most difficult, especially in the hills and in the mountains.
La Rendena is the long-lived breed par excellence, with an average age of about six years. Longevity is a parameter of great importance as it allows a low rate of comeback, and therefore a reduction in the production costs of liter of milk.
The parameter that best highlights fertility is the birth-conception period, which for Rendena is around 85 days. This is an extremely valid datum as it allows the birth of a calf per year, and the programming of the parts in the desired times. This is particularly important for companies that plan to pasture in the summer months.