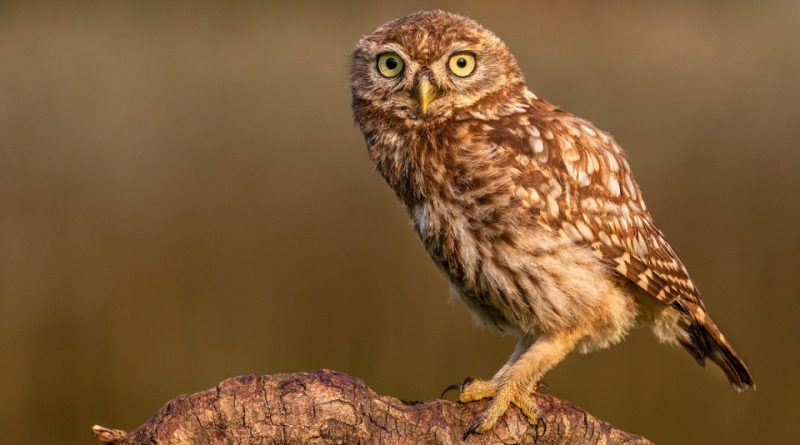 The Little owl (Athene noctua, Scopoli 1769) is a nocturnal bird of prey that belongs to the Strigidae family.

Systematics –
From a systematic point of view, it belongs to the Eukaryota Domain, Animalia Kingdom, Subgenus Eumetazoa, Superphylum Deuterostomia, Phylum Chordata, Subphylum Vertebrata, Superclass Tetrapoda, Class Aves, Order Strigiformes, Family Strigidae, Subfamily Surniinae and then to the Genus Athene and to Species A. noctua .
There are several subspecies of this bird.

Geographical Distribution and Habitat –
The Little owl is a nocturnal bird of prey present throughout the northern hemisphere, in Europe, Asia and Africa. The species is fairly evenly distributed from the Mediterranean basin to China, below the 60th parallel. First absent from the British Isles, it was successfully introduced in the late nineteenth century, and is present today, as well as in North Africa, also in tropical Africa, from Ethiopia to the Persian Gulf.
It is a very common bird in Italy and is widespread in almost the entire peninsula except the Alps. Its preferred habitats are in the vicinity of civilian settlements, where there is human presence, in the hilly area. In our country, it is widespread as a breeder in the flat and hilly areas at altitudes generally lower than 700 meters, except for sporadic and modest penetrations in the Alpine and Apennine valley bottoms, at altitudes generally lower than 1,000-1,200 meters. The species prefers mixed-farming areas with rows of old plants, farmhouses, abandoned buildings, new or abandoned industrial areas, where, despite the negative effects of the new agricultural management systems, it reaches a more than decent density. Many couples then settled in sub-urban areas and in the historical centers of many cities.
Its presence diminishes as it gets closer and exceeds 1000 m of altitude, especially in cold periods, as snow strongly limits its food sources. 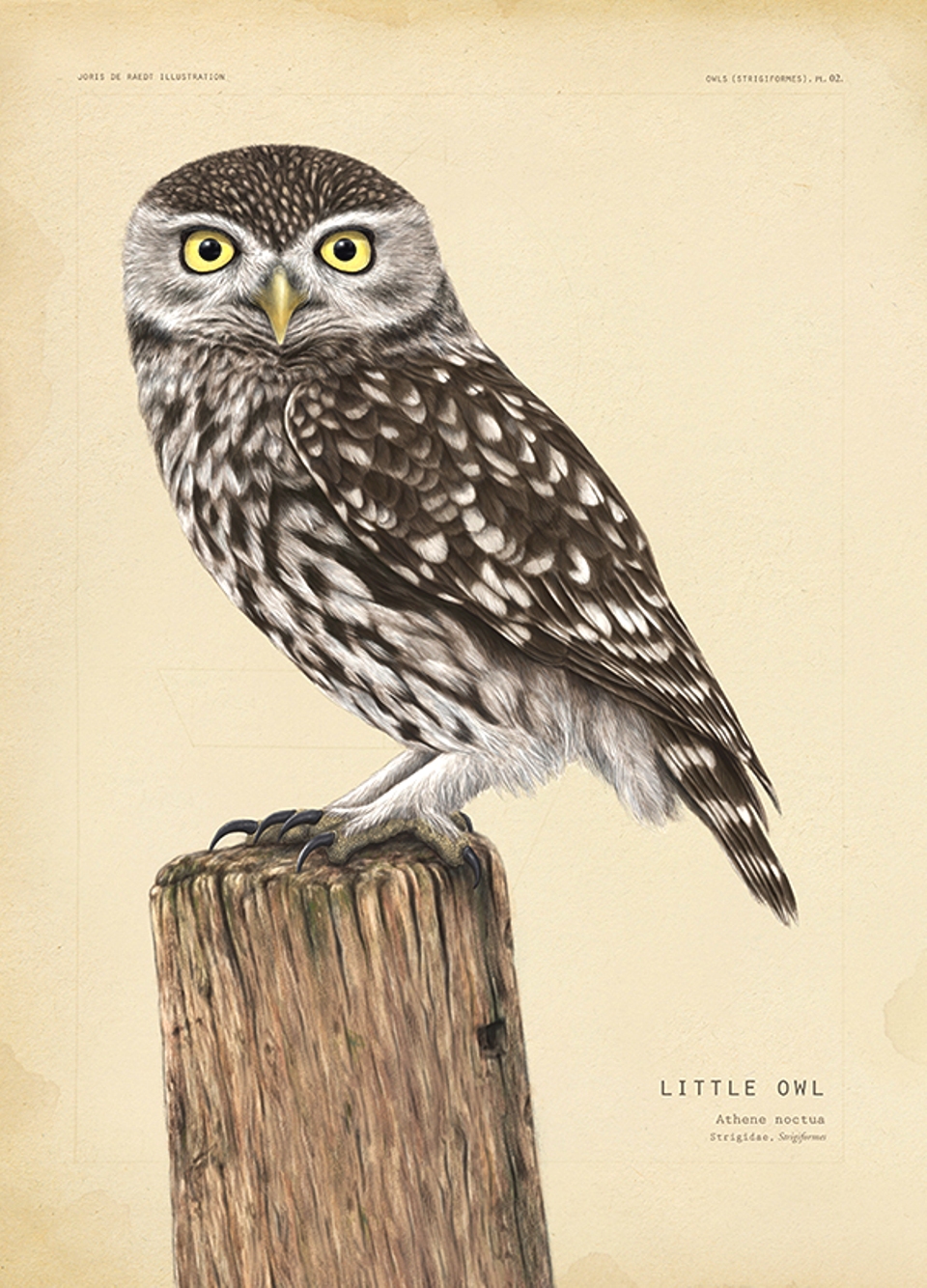 Description –
Athene noctua is a bird about 21–23 cm long, with a wingspan of 53–59 cm and a weight ranging from 100 to just over 200 grams.
It is distinguished by the squat shape, broad and flattened head without the typical ear tufts of the owl; with yellow eyes and long legs partially covered with bristles. The upper part is gray-brown stained with white while in the lower part it is predominantly white, stained with brown.
It is recognized for its vocal repertoire. The male emits a melancholy “hu-u-ou” repeated at variable intervals, after 3-4 seconds. Sometimes, however, the owls emit shrill and annoying sounds as self-defense.

Biology –
The Little owl nests between March and June. The cycle begins with the female laying 2 to 5 white eggs in small cavities between the rocks, in trees, in the walls of old buildings, in abandoned dens of medium-sized mammals. The hatching lasts about 4 weeks and is assisted by the male in hunting activities. After a month or so the chicks leave the nest, but become completely independent only at 2-3 months of life.

Ecological Role –
The Little owl is a nocturnal bird par excellence, but it can also be active in the late afternoon and early morning and is very alert even in the rest of the day.
It is a carnivorous bird that, like all strigiformes, is capable of swallowing whole preys, only to regurgitate, in the form of wads, the indigestible parts (hair, feathers, teeth, bones, keratinized shell of insects). It feeds on small vertebrates and large insects.
The Athene noctua has marked terricolous habits and is not closely related to forest environments, it shows a distinctly sedentary behavior – except for erratic and irregular migrations by “Nordic” subjects.
Unfortunately the modification of the habitats, the succession of cold winters and the increase in vehicular traffic of which the species is the most frequent victim among the Strigiforms, have conditioned the population trend of this small predator. More serious, in fact, compared to other Strigiform species, appear the losses due to vehicular traffic: out of 800 Strigiformes collected on Italian roads, in the period 1990-2000, 41% belonged to this species. Every year several hundred not-yet-independent young people are taken to wildlife recovery centers throughout Italy.
Among the other risk factors are electrocution, impact against suspended cables and fences, illegal felling during the hunting season, but also cutting operations of tree rows (especially mulberry trees) and restructuring of buildings which, especially in reproductive period, can cause loss of broods or high mortality of the chicks.
The Little owl, in Italy, is more present in northern Italy, above all in the rural areas of the plains and the first hilly strips, where, moreover, we are witnessing a progressive – sometimes quite marked – recovery of the populations (for example in Pavia, Bergamo, Milan , Brescia, Mantova, with densities that even reach 25 pairs per 20 square kilometers). Elsewhere, in peninsular and insular Italy, the species shows a stable trend.
History and traditions have always attributed a strong symbolic value to Little owl, sometimes beneficial, sometimes a bearer of bad luck. In ancient Greece, for example, it was considered sacred for the goddess Athena (hence the scientific name), goddess of wisdom, and still today is depicted in many lucky charms. From the popular tradition it is instead considered in a more negative sense, so much so that seeing it perched on the roof of one’s own home was considered a bad omen. Quite peculiar is also another meaning of the term “owl”, associated, in common language, with that of a woman who would like to be courted attracting numerous admirers: a custom due to the fact that this bird of prey, when used by hunters as a reminder to deceive small passerines, he attracted them with a particular way of flapping their wings, with bows, winks and other similar attitudes, “irresistible” spectacle for potential prey.