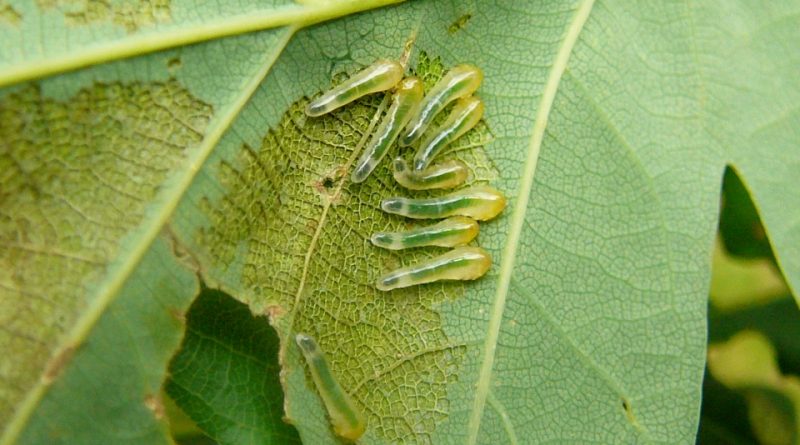 Geographical Distribution and Habitat –
Caliroa varipes is an insect that is widespread all over the world and that lives mainly on oak and poplar trees.

Morphology –
The Caliroa varipes is a small hymenopter whose adults, whose dimensions vary between 5 and 6 mm, are black, head with antennas in which the third article is shorter than the following two taken together; the thorax is presented with wings tinged with black with brown stigma and veins and an under-stigmatic band of the same color. The mesotoracic legs have pale yellowish tibiae in the middle part of the outer face in males or slightly anulate pale brown at the base in females.
The metathoracic legs, both in the male and in the female, have tibias of color from yellowish white to light brown in the basal quarter and the first article of the tarsus completely black or slightly yellowish at the base.
The larvae have a cylindrical shape more dilated anteriorly. They have a dark brown head, covered with mucus, are yellowish with the central part of the greenish body, due to the color of the ingested plant tissues that transpire outside.
The egg is ovoid, translucent and with a smooth chorion.

Attitude and biological cycle –
The Caliroa varipes is a small Hymenoptera whose larvae live, in the gregarious state, on the lower leaf page of the host plants, causing typical erosion of the mesophyll, which does not affect the veins and consequent intense skeletonization of the leaves.
It is a homodinamic species that at our latitudes completes two generations and hibernates as a larva cocooned in the ground. The adults that flicker with the wintering forms fly in the months of April and May.
The females lay their eggs in the leaves by inserting the eggs under the epidermis of the lower page. On each leaf, a few dozen can be found.
The larvae are born around the middle of May and reach maturity at the end of the same month or at the beginning of the next one.
When they reach maturity they let themselves fall to the ground and get buried, weave the cocoon, pupate and after a while the adults flicker, this happens at the end of June or at the beginning of July. This generation is followed by two others of which the last is incomplete from the hibernating forms. The larvae during trophic activity, which occurs on the underside of the leaves, live gregarious and feed only on the parenchyma. The harmful period is from May to July.

Ecological Role –
The Caliroa varipes develops its cycle in environments where there are Oaks or Poplars.
As regards the containment of this insect, in general, direct chemical interventions are not justified.
However, in the case of heavy infestations on young nursery plants, it is possible to intervene with traditional cytotropic insecticides against larvae.
Other possible interventions are those of mechanical struggle which foresees the removal of the infested parts.
Since the larvae feed on the wood in the basal part of the plant as well as in the roots, this can cause a structural weakening, with possible compromise of the stability of the attacked plants, entailing the risk of consequent crash or sudden break-up.
For this reason it is necessary that the presence of these insects be signaled to promptly verify the state of the plants with symptoms of the presence of the insect, be they public and private property.
To identify the presence of this small hymenopter, let us consider that the throttle holes, which are perfectly circular, have a diameter of about 2 cm.
Among other things, potential holes of other pathogens are generated through these holes.