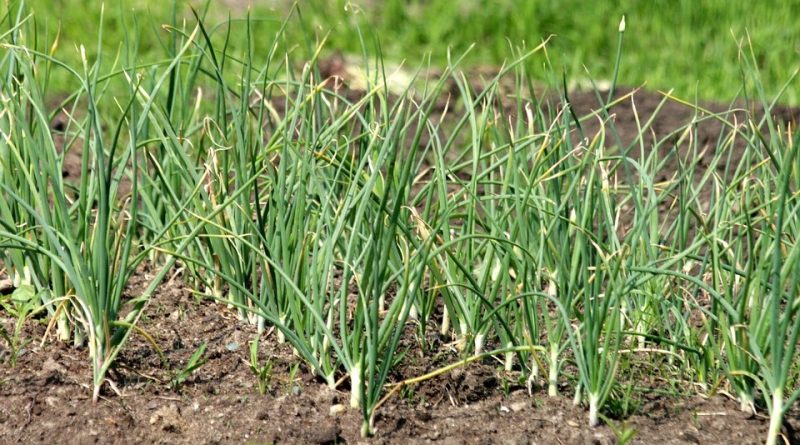 Systematics –
From the systematic point of view it belongs to the Eukaryota Domain, United Plantae, Magnoliophyta Division, Liliopsida Class, Liliales Order, Amaryllidaceae Family, Allioideae Subfamily and therefore to the Genus Allium and to the A. sativum Species.

Etymology –
The term Allium comes from allium / alium garlic, mentioned by Plautus, Pliny and others; sitratta of a term of uncertain origin, probably from the Greek ἄγλῑς áglis garlic head; the Webster Dictionary, based on the Asian origin, proposes a possible connection with the Sanskrit āluka root edule of Amorphophallus campanulatus; for A. Gentil it would derive from the Celtic to hot, burning, for the characteristic taste.
The specific epithet sativum derives from satum (past participle of sero sow, plant) sown, planted: that is sown or planted, cultivated, domesticated.

Geographical Distribution and Habitat –
The regions of origin of this species are to be found in the temperate zones of the northern hemisphere and, even if cultivated on a large scale, especially in south-western Siberia. However, it has quickly spread to the Mediterranean basin, so much so that it was a plant known since ancient times, so much so that it was already used by the Egyptians in the III millennium BC. and, subsequently, from the Greeks, the Romans, the Chinese and the Indians. Today it is grown on all continents, in Italy it is cultivated especially in Campania, Emilia-Romagna, Veneto and Sicily. 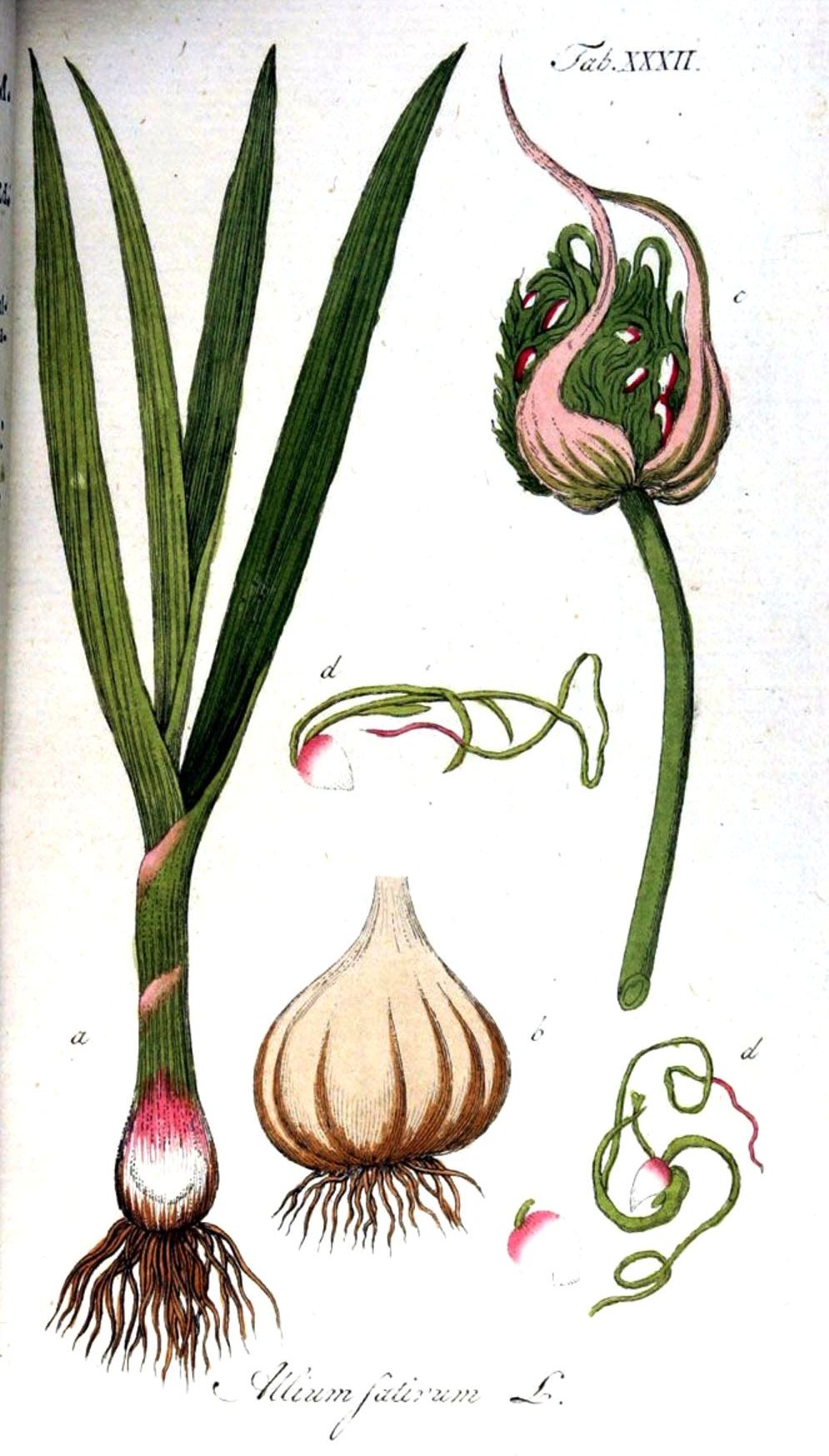 Description –
Allium sativum is a perennial bulbous herbaceous species up to one meter high; as an adult it has 40-60 cordiform and superficial roots, which cover the first 30 centimeters of soil.
The leaves are basal, amplessicauli that unlike those of the onion, do not serve, subsequently, from reserve organs. The outer one wraps around the previous one for about 10 centimeters, a value that increases going inwards.
It has a cylindrical, full flower scape, with a length of 40-80 cm, with at its top an umbrella-shaped inflorescence wrapped in a pointed spade.
The flowers are in variable numbers, they are carried by a long and thin peduncle; these may vary in color from white to rosy, purplish and often mixed with bulbils derived from the metamorphosis of flower buds.
The flowers have 6 tepals, persistent in the fruit, 6 stamens and a trilocular ovary, a straight and filiform stylus and an entire stigma. Following fertilization there is a capsule, which rarely contains seeds.
In garlic the reproductive organs are represented by the cloves (the cloves), which present the convex dorsal face; these, in groups of 5-20, are inserted directly on the stem, reduced to a disk and called corm, and form the bulb or head or head. This is wrapped in a series of metamorphosed leaves, called sterile tunics, with a protective function.
Depending on the variety, the average weight of a garlic bulb can range from a minimum of 20 grams to a maximum of over 150 g.

Cultivation –
For the cultivation of garlic it is necessary to choose loose soils, with good fertility, texture and structure, able to guarantee a rapid disposal of rainwater, also in consideration of the period in which it is often cultivated (from autumn to the beginning of summer).
Regarding the cultivated material, rather than variety it is a question of ecotypes, more or less homogeneous, with the exception of the “Rosso di Sulmona”, which seems to be the only Italian variety capable of producing, every year, the floral scapes that go, however, they are eliminated in time to allow the formation of cloves.
The cultivated material is normally divided into “the whites” and “the reds”; to the latter belong, among other things, the aforementioned “Rosso di Sulmona” and the “Rosso francese”, while to the former the “Bianco piacentino”, the most widespread in Italy. The reds, in addition to the different colors, are characterized by a shorter cycle of about three weeks and larger bulbs.
For details of the cultivation technique, see the following sheet.

Preparation Mode –
Allium sativum bulbils are used since ancient times as a condiment for food. These can be used, raw, in salads or added to sauces, stews, fish dishes or vegetables. Very used also in the preparation of sausages (garlic salami) and in the canning industry for starters in oil and vinegar.
To remedy at least in part the discomfort of the consequent “heavy breath” one must deprive the garlic of the small internal green shoot that is easily removable.
From the garlic it is also possible to extract an oil (60 g of 100 kg of bulbs), of yellow-brown color, containing sulphurated compounds among which the most important is the allyl bisulphide from which a bactericide is obtained which is, as mentioned, allicin.
Moreover, being also an excellent digestive and diuretic stimulant, it can be used as an infusion (from 5 to 10 g in a liter of water) while for an antiseptic action from 10-15 g in decoction.