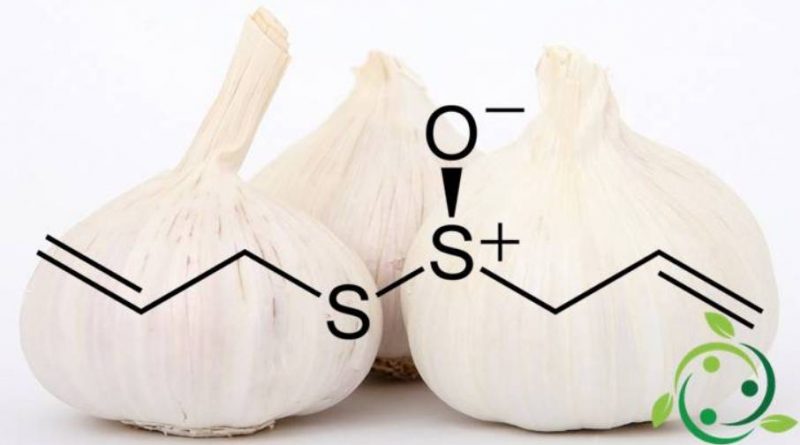 The alicin whose term in the official IUPAC nomenclature is: S-allyl acryl-1-sulfioioate or diallyl thiosulfinate and whose brute or molecular formula is: C6H10OS2 is a sulfuric compound that can be obtained from garlic (Allium sativus L.) .
The allicin was isolated and first described by Chester J. Cavallito and John Hays Bailey in 1944 and is found in liquid form, a pungent odor typical of garlic and the like, characteristic of many sulfur compounds such as thio-alcohols, -esters -ethers and low molecular weight derivatives.
Allicin is a chiral molecule, but in nature it is found only in a racemic form, which can also be produced by the oxidation of diallin-disulfide.
Allicin is not found in the whole bulb, but is formed when the segments that constitute it – called cloves – are cut, chewed or otherwise shredded.
The process is activated following these mechanical actions so that from the vacuolar juices an enzyme is released, called allinase, which acts on an amino acid, the alliin, transforming it into allicin.
Allicin is an unstable substance that is a precursor to diallyl disulfide, a volatile molecule that originates from the loss of an oxygen atom from the allicin molecule.

It is thanks to the high volatility that the diallyl disulfide gives the minced garlic the typical pungent smell.
Allicin, besides garlic, can be isolated from onions and other species belonging to the Alliaceae family.
In nature the role of allicin is to defend this kind of plants from the aggression of parasites and herbivores; even on humans it has the same antibacterial properties even on humans.
In fact the compound has antibiotic and antifungal effects.
Allicin appears to exert a protective action against atherosclerosis, thanks to its ability to improve the blood lipid profile and reduce inflammatory phenomena.
Other properties of allicin are antihypertensive, antioxidant and antithrombotic properties. Certainly this is not a real healing action, but garlic can still help to slightly lower blood cholesterol values ​​and blood pressure.
Historically, garlic was used to rid the digestive system of parasites and intestinal worms. Aqueous extracts of allicin have been shown to be active against Staphylococcus aureus strains resistant to the methicillin antibiotic.
Allicin has a low (2%) solubility in water. It is quickly degraded and destroyed during cooking.

One thought on “Allicin”