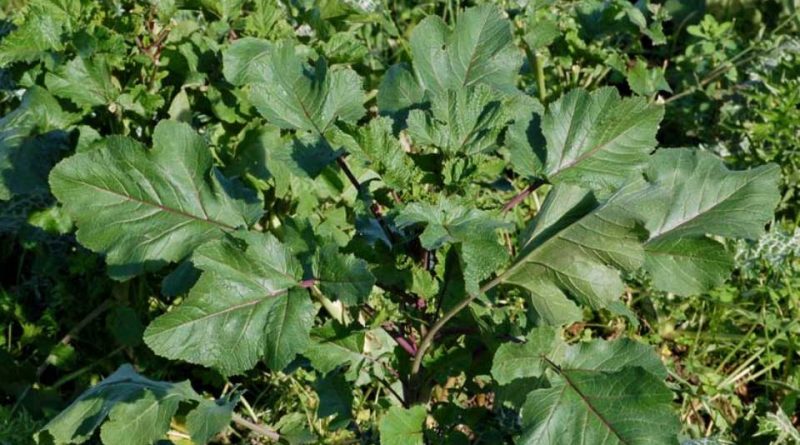 Systematics –
From the systematic point of view it belongs to the Eukaryota Domain, United Plantae, Magnoliophyta Division, Magnoliopsida Class, Capparales Order, Brassicaceae Family and therefore to the Brassica Genus and to the B. nigra Species.

Etymology –
The term Brassica is the Latin name of the cabbage described by various authors, attested in literature starting from Plautus (III-II century BC). The origin of this name is uncertain and has been traced back to Greek or Celtic voices, without totally convincing evidence. Several etymological texts refer to the word Βράσκη braske, according to Hesychius used by the Italics in Magna Graecia to indicate cabbage.
The specific epithet nigra comes from black niger: due to the color of the seeds.

Geographical Distribution and Habitat –
The origins of black mustard are probably Asian or Egyptian.
This species is widespread in central and southern Europe, North Africa and western Asia; in Italy it is widespread in all regions, it grows in fields and in ruins.
It is discretely cultivated and has climatic and pedological needs similar to rapeseed and rape, but it has a shorter cycle. 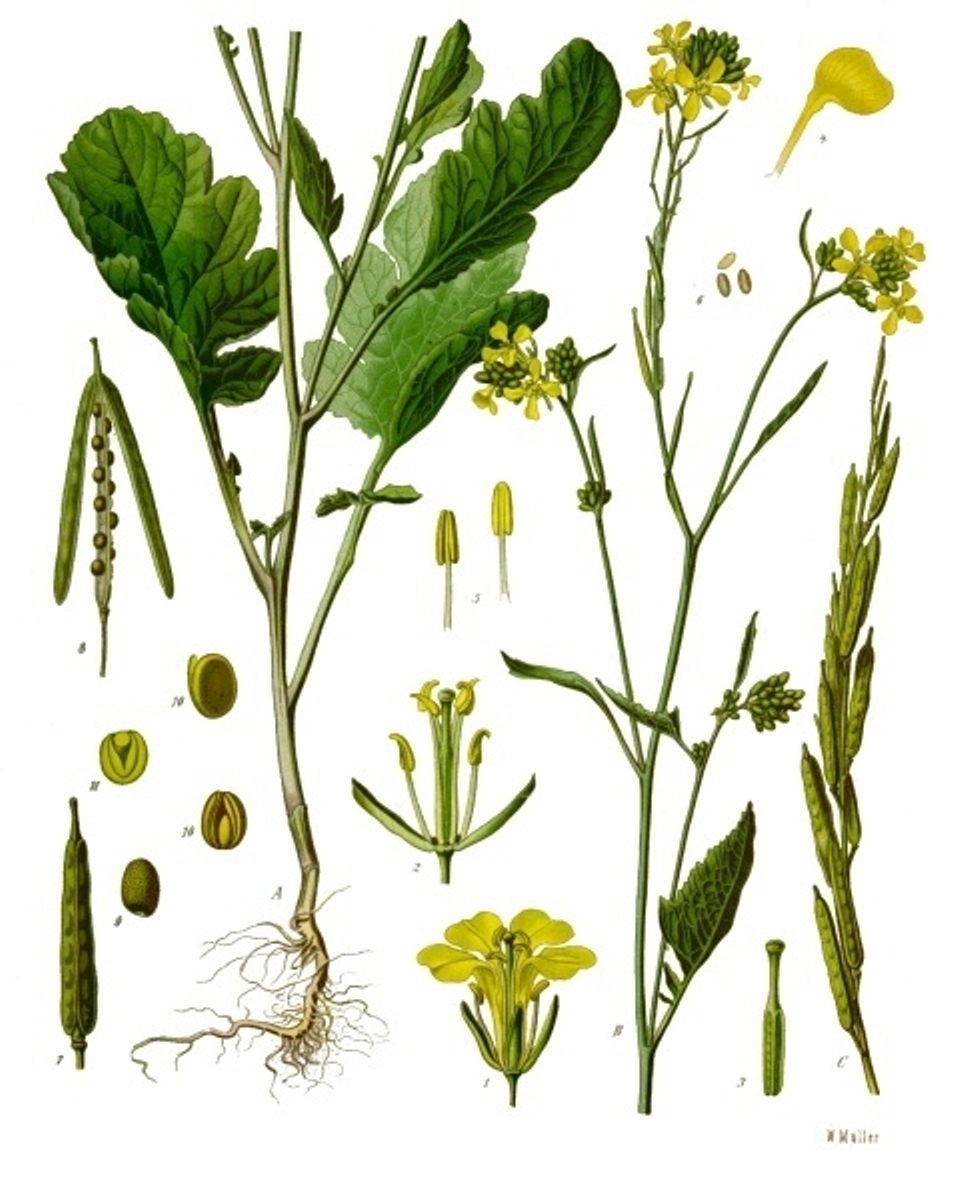 Description –
Brassica nigra is an annual species, with fittonante root, short, delicate, and white in color;
The stem is tall from 50 cm to 120 cm and even more, furrowed angular, fistulous, simple or branched, with alternate branches.
It has petiolate leaves, lirate to toothed lobes, with the lower ones long or lanceolate and the upper ones.
The flowers are tetramers, regular and small, of yellow color, with an inflorescence that initially is a corimbo but that with the lengthening of the axis turns into a raceme that composes a wide and sparse panicle. The peduncle is 2-3 mm long the free sepals are light green and patent, the yellow corolla, less than 1 cm wide is formed by 4 whole petals arranged in alternating cross with sepals. The androceum has 6 stamens, of which the two shorter lateral ones, all have free and thin filaments with oblong and bilocular anthers. Gineceo with oblong and bilocular ovary, formed by two carpels welded on the margins, with the cavity divided by a membranous segment and surmounted by a short stylus with a capmatite, bilobo.
The fruits are siliques tomentose, with a thin rostrum and containing oval brown seeds with a diameter of 1 – 1.5 mm, with a reddish-brown color, more or less dark, the color tones can also vary on the same plant. Externally they have a lattice formed by very thin crests that it is difficult to distinguish with the naked eye. The weight of 1,000 seeds is approximately 5 grams.

Cultivation –
Black mustard is a weevil plant that needs deep plowing and organic fertilization and subsequent harrowing.
The sowing takes place in October-November in the South, alone or in association with other grain plants, such as broad bean, fleshed clover, oats, barley, broad-leaf or 30-35 cm apart.
Subsequently 2-3 shears are made and a topping to cut the tallest flowers, whose siliques do not reach the complete maturation.
The harvest period is in May when the plant is still half-dead in order to prevent ginning.
The yield of mustard per hectare varies from 10-12 quintals with an average of 33% oil.

Uses and Traditions –
Mustard is grown for the production of oil, called mustard essence; this has a light yellow color, reflective, with a strong smell that causes tears and a burning taste. In addition to oil extraction, black mustard is used as a forage plant and in Sicily it is used in autumn herbaceous plants.
The seeds contain an alkaloid, synapine, and a glucoside, sinigrin.
The seeds are used mixed with honey and are widely used in areas of Eastern Europe as a soothing cough. In eastern Canada, before the advent of modern medicine, the use of “mouche de moutarde” was widespread to treat respiratory infections. This was obtained by mixing mustard seeds with flour and water, making it a poultice. This poultice was applied to the chest or back and left until the person felt a burning sensation.
The seeds also have revulsive properties. If ingested or inhaled into powder, the mustard is toxic, with inflammation of the gastro-intestinal tract, with serious injuries to the uropoietic apparatus with albuminuria, hematuria, bladder irritation, gives cramps and general excitement up to the paralysis of the nerve centers.

Preparation Mode –
In addition to the uses described above, black mustard is also used for human nutrition. From its seeds, black mustard is obtained, a condiment sauce with a sharp and spicy taste.
In the kitchen, moreover, the leaves and flowered tops are also used to prepare soups.