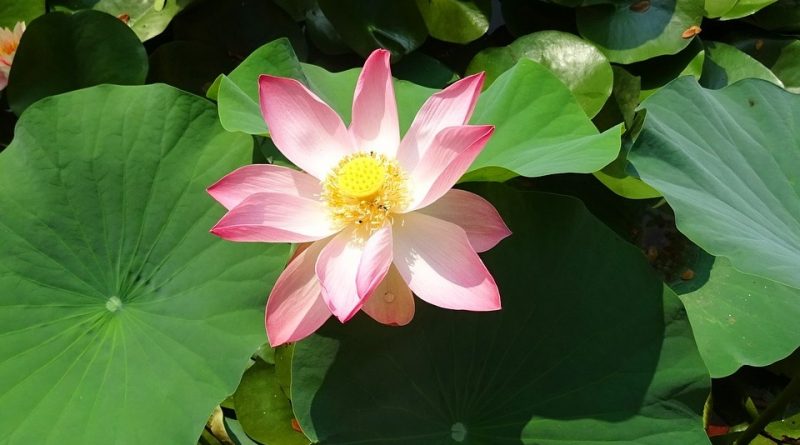 The Asian lotus flower (Nelumbo nucifera Gaertn., 1788) is an aquatic herbaceous species of the Nelumbonaceae family.

Etymology –
The term Nelumbo is the Latinization of the indigenous Sinhalese name with which the plant was called in the places of origin. The specific epithet nucifera comes from nux, hazelnut nut núcis and to bear: which produces fruits similar to nuts or hazelnuts.

Geographical Distribution and Habitat –
The Asian lotus flower is an aquatic species native to Asia and Australia where it lives and reproduces in habitats characterized by ponds and invaded by stagnant or almost non-current waters. 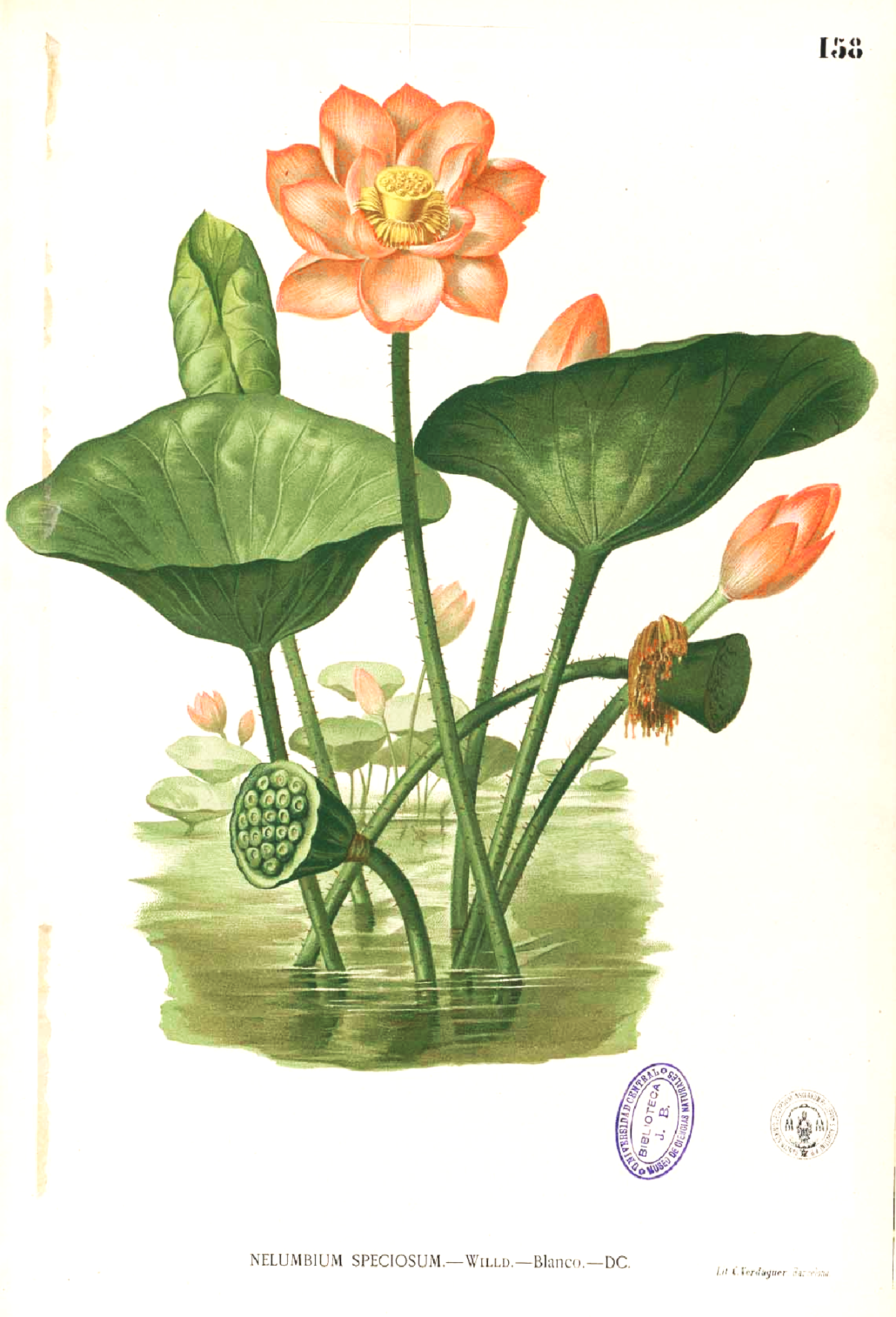 Description –
Nelumbo nucifera is an aquatic species with rapid development that grows in still waters with depth normally included between 5-50 cm but also beyond.
The leaves are large up to 60 cm, with a green-glaucous color, peltate, with a waxy appearance, which emerge more than 1 m from the surface of the water; they are long pedunculate. The flowers can also exceed 20 cm in diameter, with pink colors and a typical anise fragrance. The fruits are very ornamental.

Cultivation –
For the cultivation of Nelumbo nucifera, ponds or small lakes or in special artificial tanks must be chosen.
One must choose a sunny position and before planting the bulbs it is advisable to place them in a large container, partially filled with soil.
When the nelumbio bulbs have produced at least 4-5 leaves the containers can be filled with earth and then sink into a pond or pond.
If usually the winters of the area in which this kind of plant is to be grown are very rigid it is advisable to remove the bulbs from the water, when the leaves are dried, and keep them in the dark in a cool place, wrapped in the sphagnum until the following spring to avoid that too low temperatures can compromise health and growth. They can also be stored in a container in which wet sand is placed.
For details of the cultivation technique, see the following sheet.

Uses and Traditions –
Although normally associated with Asian culture, few people know that in addition to Asia, the lotus flower has been known since ancient Egypt and therefore also in contexts closer to our culture, that is, in the Mediterranean. In Egypt this flower was particularly widespread and known because it flourished following the flood periods of the Nile. It was called “Seshen” and also in this culture it was a sacred flower, in fact it was used during religious rites and was offered as a gift to the gods. According to this ancient civilization, the world had originated from a divine lotus flower that emerged from chaos. It was the symbol of the sun god Ra and was associated with the concept of rebirth and eternal life.
But we also find the Lotus flower in Greek mythology, in particular in the Odyssey where Homer speaks precisely of a people of “latophages”, that is, lotus flower eaters, who welcomed Ulysses who arrived to find refreshment after his long journey. On this occasion he is offered the fruit of the plant which due to its narcotic effect is associated with the loss of memory.
In essence, each civilization attributes different meanings to it, even if in general they all agree in associating it with a concept of spiritual “reconstruction”.
The Nelumbo nucifera is used both as an ornamental plant and as a plant for food and therapeutic use.
In the West this plant is however cultivated as an ornamental plant to decorate ponds, basins and ponds, or cultivated in hydroponic tanks.
Furthermore, the particular fruits, properly dried, are used in floral compositions, to decorate living rooms and apartments.
Of this plant, the flowers, seeds, young leaves and rhizomes are all edible. In Asia, the petals are eaten while the leaves are also used as a dish to contain food. The rhizome (pning in Chinese, ngau in Cantonese, bhe in India and Pakistan, and renkon in Japanese) is used as a condiment. The petals, leaves and rhizomes can also be eaten raw but cooking is recommended due to the risk of transmission of parasites.

Preparation Mode –
The Asian lotus flower, as mentioned, is a plant of which all parts are edible and appreciated for over a millennium for their anti-diarrheal, febrifuge and vitamin properties, confirmed also by recent scientific studies.
That’s why nothing is thrown away of this plant. The dried seeds are eaten as pretzels, cooked as popcorn and used in confectionery.
From the stamens of the flower a fragrant tea is obtained, while the leaves are useful, as seen, to wrap and contain food.