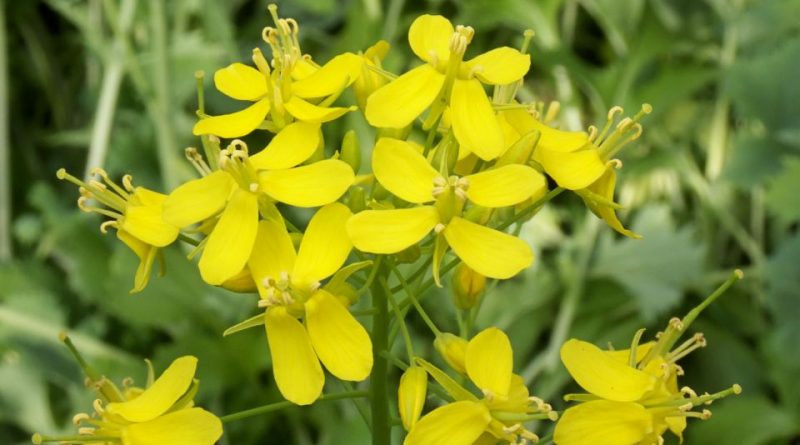 The Winter rape (Brassica rapa campestris L.) is a herbaceous species belonging to the Brassicaceae family.

Systematics –
From the systematic point of view it belongs to the Eukaryota Domain, Kingdom Plantae, Sub-Trinchega Triaxion, Capparales Order, Brassicaceae Family and therefore to the Brassica Genus, to the B. rapa Species and to the Sottospecie campestris.

Etymology –
The term Brassica is the Latin name of the cabbage described by various authors, attested in literature starting from Plautus (III-II century BC). The origin of this name is uncertain and has been traced back to Greek or Celtic voices, without totally convincing evidence. Several etymological texts refer to the word Βράσκη braske, according to Hesychius used by the Italics in Magna Graecia to indicate cabbage.
The word rapa comes from rápa or rapum rapa in Columella & al. (from the Greek ρᾰπυς rápys, assonant with ρα ra, contraction of ῥίζα rhiza root, and from πούς pous foot).
The epithet of the subspecies campestris derives from the campus place piano, campo: which grows in the fields.

Geographical Distribution and Habitat –
The origins of the Winter rape are not certain but in any case it is a plant cultivated in the countries of central and northern Europe. In Italy it is cultivated in the Po Valley as an autumn-spring grass, where it is used between the end of March and the beginning of April, a time in which it flourishes. 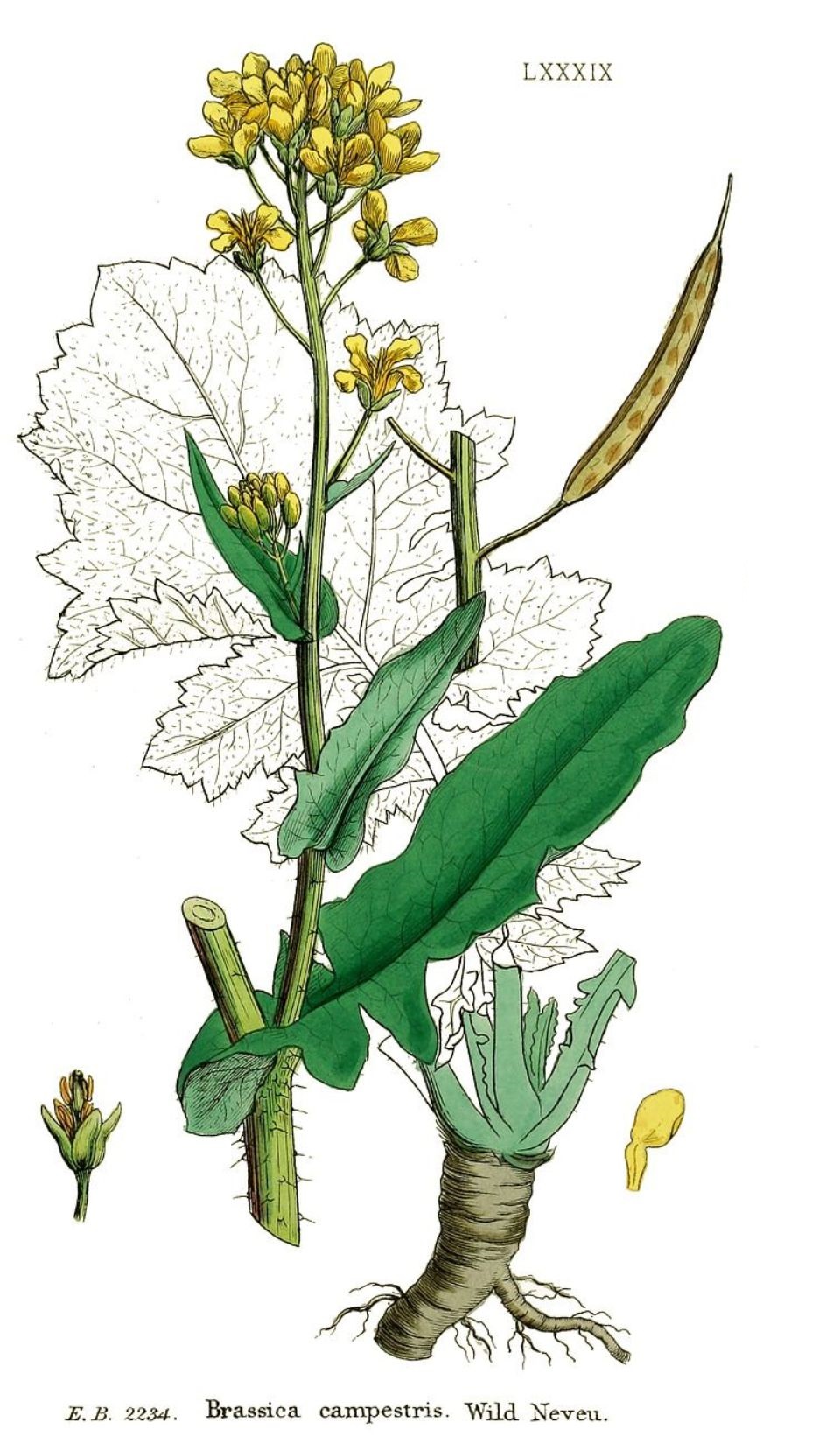 Description –
The Brassica rapa campestris is a species of herbaceous consistency, annual or biennial, which has a taproot, gracile, non-enlarged collar, very similar to oilseed rape, from which it is distinguished by having the roughest leaves, bristling with hairs, in particular on the lower side, less glaucous and less fleshy.
Both the stem, the cauline leaves and the inflorescences are very similar to those of oilseed rape.
The fruits are siliques, very erect, rostrate; the seeds are lighter than those of oilseed rape, with an oil content of about 35%.

Cultivation –
Of Winter rape, in the same way as oilseed rape, there are autumn and spring varieties.
From an agronomic point of view it is a cultivated variety so that the soil must be worked deeply and well refined.
The fertilization of this plant, where available, must be done with mature manure and with the integration of the crop residues of the plants previously used in rotation.
The Winter rape is sown in the period between August-September, making this operation coincide, possibly, with the first rains.
To escape the winter frost it is good that the plants are well rooted but not excessively developed before the cold season to avoid being damaged.
The harvest of this plant is mechanized, using the combines; yields per hectare are around 20 quintals.
In irrigated areas, it can be sown as a weed and is sown in late summer and offers a first cut in November and a second, less productive, in spring.

Uses and Traditions –
Brassica rapa campestris is an annual or biennial plant that is grown in central and northern Europe and, in Italy, mainly in the Po Valley.
It is grown as a spring and autumn grass. The tiny seeds are used, from which an oil with organoleptic characteristics similar to canola oil is obtained. The cake is used in animal husbandry for feeding livestock. The high content of vitamin C makes the Winter rape useful as a supplement in the diet of small domestic animals such as the Peruvian Cavia, unable to synthesize it.
The organoleptic characteristics of rape oil are very similar to that of rape.
As with rapeseed, rape cake is also used to feed livestock and as a fertilizer. As mentioned, it is also used as a herb.
In the areas where the Winter rape is grown, in the spring period there is a landscape characterized by expanses colored by an intense yellow of extraordinary vivacity.
The Winter rape is also a very visited plant by the bees, which make it a honey with a very characteristic consistency and aroma.
The Winter rape however, and its oil, is a plant known since ancient times; the Romans ignored its existence, while the Gauls (in central Europe) already made extensive use of it, which could make one think of an origin of this plant in that area.
Some historical finds place the first cultivations of oil rape in the north of France (in the XIII-XIV century); in the Middle Ages, rape oil was already the subject of exchanges and sales by the “corporation of oil producers” and by that of the “apothecary tradesmen”.
Like many other types of seed oil, before the eighteenth century, rape oil also suffered great discrimination from the scientific community; only in 1774 with the publication and relative scientific denial of the French abbot Rozier, many of these “banned” oils were restored on the continental market.
From 800 onwards, the rape was cultivated mainly in Eastern Europe where, for religious reasons (Orthodox church), during Lent, milk and butter were strictly prohibited for the benefit of rape oil.
Since the eighteenth century, rape was considered, in addition to being a food, an emollient and resolving oil of great efficacy (Lémery – Pharmacopée Universelle); in the following century Roques and Cazin confirmed these properties by attributing to rape oil also the peculiar laxative function.
In the ‘900, Fournier re-proposed its therapeutic utility both as an emollient and in the resolution of intestinal constipations through enteroclisms, adding a hypothetical preventive function against hepatic colic and renal ones. Moreover, it seems that the popular traditions (of which, however, the real reliability is not known) still pass on today to drink a glass of rapeseed oil as a remedy for the bite of a viper.
Rape can also be used only with seeds that, if taken in powder form, are highly diuretic and sudorific (5g in a cup of linden twice a day), while mixed with honey (same dose) can provide a certain emollient effect against cough and bronchitis.
For external use, using pads, the rapeseed oil is still used as a pro-cicatrizant in the treatment of sores, while more generically it is useful (mixed with aromatics) to solve the friction of massages and manipulations against pain.
To date, there is not much information on the qualities and properties of rape oil, as it is an “obsolete” food and consumed only in small territorial realities for artisanal production (on the contrary, it is of greater interest for industrial soap production) .

Preparation Mode –
Winter rape is a plant that, in addition to the uses described above, is used in the kitchen. Rapeseed oil lends itself to the preparation of dishes that need a good seal (due to the greater binding and emulsifying capacity than other oils) and is also very conservable compared to those equally rich in polyunsaturated fatty acids; moreover, despite being rich in omega3, some claim that the rapeseed oil is very suitable for frying, thanks to its fat and viscous consistency.