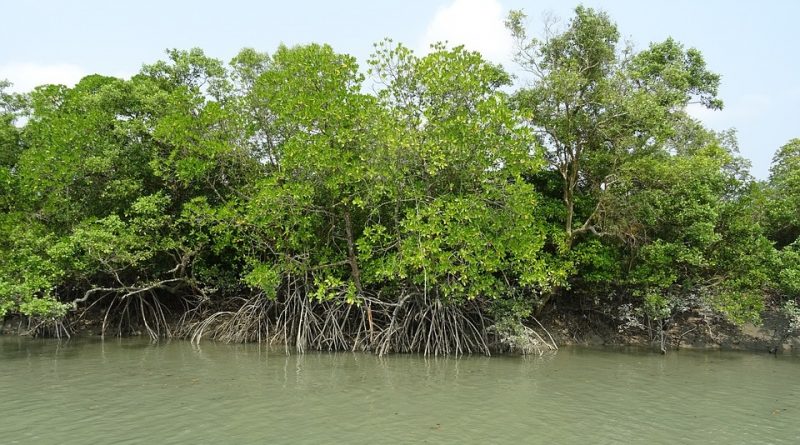 The Sundarbans forest is an eco region that covers about 1,395 square kilometers, of which 60% belongs to Bangladesh and 40% extends along the Indian peninsula.
The Sundarbans forest is the largest mangrove forest in the world and was classified by the WWF as an ecoregion (code IM1406). This forest extends over the delta of the Ganges, Brahmaputra and Meghna rivers, in regions that, as mentioned, belong to Bangladesh and the state of West Bengal, in India.
This region is included in the Global 200 list under the name of Mangrove of the Sundarbans.
Since 1997 Sundarbans forest is a UNESCO heritage site, India’s national park is very important, as well as for its biosphere for mangroves is for the white Bengal tiger (Panthera tigris tigris); in this sense it is the largest tiger reserve on the planet.
Sundarbans is a collection of areas connected with a complex network of waterways subject to tides, mudflats and small islands of mangrove forests adapted to salt water, an excellent example of ongoing ecological processes.
The total area of ​​the Sundarbans is just over 6,000 square kilometers, of which over 4,100 of dry soils and almost 1,900 of water (rivers, canals, etc.). The rivers of Sundarbans are a meeting point between fresh water (which comes from the Ganges) and salt water from the Bay of Bengal.
In this area there is an incredible biodiversity of fauna and flora and where, in addition to the Bengal tiger, one can find numerous species of cetaceans, cervids, birds, crocodiles and snakes.
In terms of biodiversity the Sundarbans have no equal among the other mangrove forests. It is a set of forests that also play a protective and productive role as its surface constitutes 51% of the forests of Bangladesh, 41% of the revenues deriving from the exploitation of forests and 45% of all timber exports of the country.
Many industries are connected to the economy derived from these forests, while the induced generated by the forest constitutes a fundamental income for over half a million inhabitants of the extremely poor coastal regions of Bangladesh.
Another very important role of the Sundarbans forests is that of natural protection against cyclones that plague the country periodically.

Unfortunately, even if an agreement is in force to close 70% of the forest by the population, it has been seen that there have been notable drops in the two most “commercial” species of mangroves, amounting to almost 50% between 1959 and 1985.
Moreover, even if a further treaty on the total limitation of hunting and the capture of any type of animal other than fish or some invertebrates, there has been a significant decrease in biodiversity and species loss (in particular 6 mammals and a reptile during the 20th century), in addition to a decline in the ecological quality of the original mangrove forest.

Flora –
As for the flora, among all the species, the Sundarbans forest is characterized by the mangrove forest prevalently constituted by Heritiera fomes, locally known as sundari, a highly sought after species for its timber, which represents about 70% of the tree species of this ecoregion; it is accompanied by Avicennia spp., Xylocarpus granatum, Sonneratia apetala, Bruguiera gymnorrhiza, Ceriops decandra, Aegiceras corniculatum, Rhizophora mucronata and the palm Nypa fruticans.

Fauna –
Although the fauna of the Sundarbans is home to numerous species of mammals, obviously the most characteristic species is the Bengal tiger, which in 2004 amounted to about 700 specimens.
The tigers of this region are remembered for their reputation as “eaters of men” and are the only example of big cats adapted to life among the mangroves. In addition to the tigers, among the mammals present, the following must be mentioned: the platanist of the Ganges (Platanista gangetica), the freshwater dolphin that skilfully moves in the muddy waters of its habitat, thanks to the eclocation.
Among the reptiles, the estuarine crocodile (Crocodylus porosus), the marsh crocodile (C. palustris), the Ganges gharial (Gavialis gangeticus) and the water lizard (Varanus salvator) should be mentioned.
The consistency of the avifauna is also important, amounting to over 170 species including the endemic kingfisher alibrune (Pelargopsis amauroptera), the minor marabou (Leptoptilos javanicus), the Asian diver rallo (Heliopais personatus), the osprey (Pandion haliaetus ), the white-bellied fish eagle (Haliaeetus leucogaster) and the testagyric fish eagle (Ichthyophaga ichthyaetus).