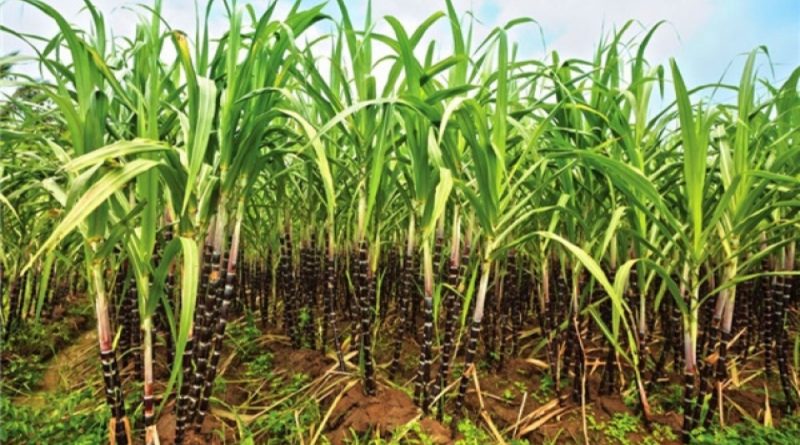 Sugar cane (Saccharum officinarum L., 1753) is a tropical species of the Poaceae family.

Systematics –
From the systematic point of view it belongs to the Eukaryota Domain, United Plantae, Magnoliophyta Division, Liliopsida Class, Poaceae Family, Panicoideae Subfamily, Andropogoneae Tribe and therefore to the Genus Saccharum and to the S. officinarum Species.

Etymology –
The term Saccharum comes from the Greek σάκχἄρ, -αρος sácchar, -aros sugar (from the Sanskrit sarkara, originally grains of sand. The specific epithet workshop rum derives from the genitive plural of medieval laboratory workshop: laboratories, for use in pharmaceutical, herbal medicine, liquor, perfumery and the like.

Geographical Distribution and Habitat –
The sugar cane is a plant native to Asia and especially to New Guinea and the Indomalese regions.
Currently it is cultivated in almost all the countries of Asia, of North, Central and South America, in Africa and Australia. In Europe, cultivation is limited to Spain, in the area between Malaga and Motril in Andalusia and in Portugal on the island of Madeira. In Italy it is not present, although its cultivation, due to the climatic conditions, would be possible in some areas of Sicily and Calabria. 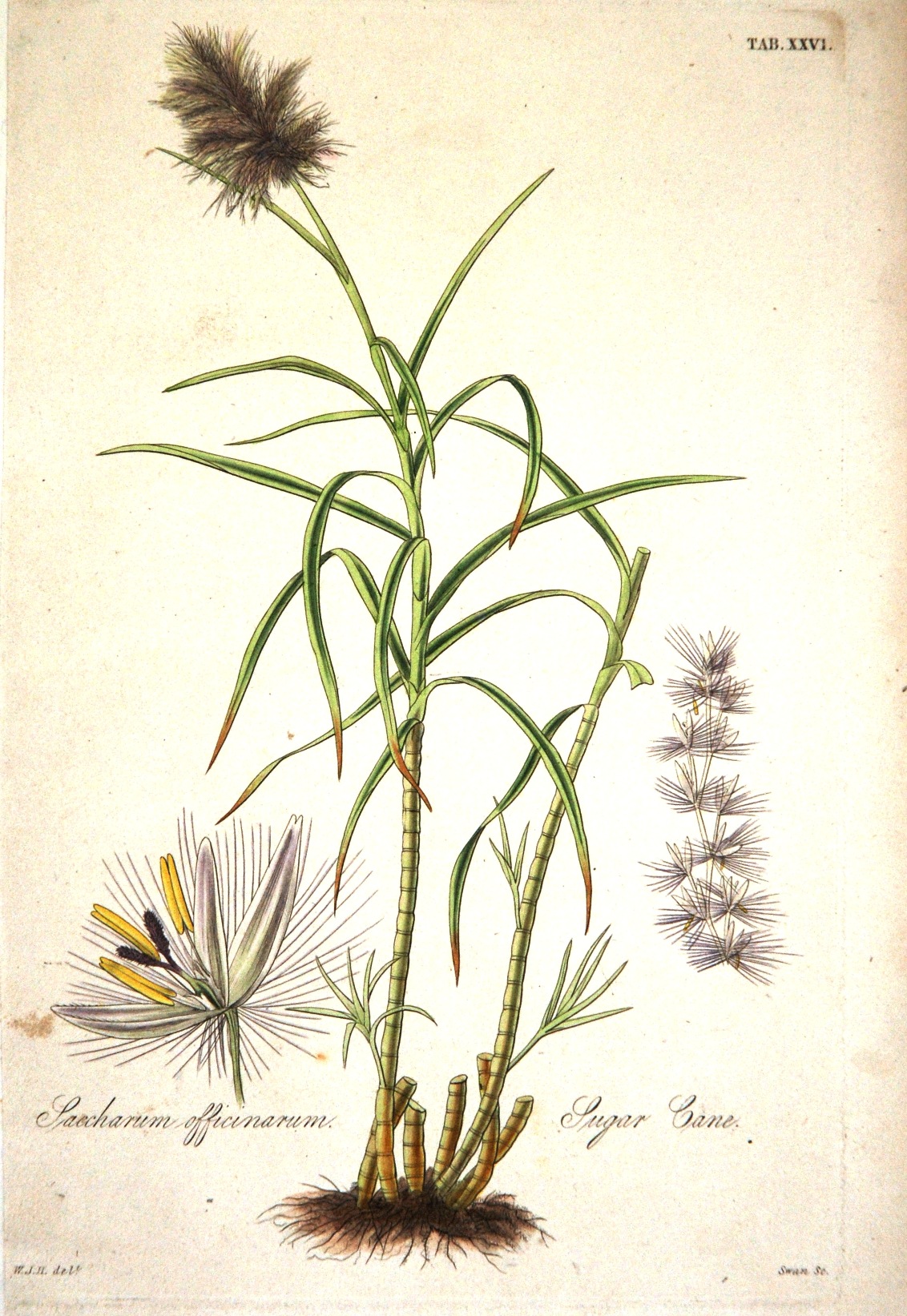 Description –
Saccharum officinarum is a plant with bushy habit, typical of graminaceous plants, with jets that arise from the collar of the main plant. It has a long stem that at maturity can exceed even three meters in height, inside which is contained a sugary juicy tissue. This has a variable diameter from 3 to 5 centimeters, able to exceed even 10 kilos in weight. The color varies depending on the species and the variety and can take on yellow, violet, green or reddish shades.
It has lance-shaped leaves and inserted on the nodes with a sheath that embraces the stem for the entire length of an internode.
It has an inflorescence that is an apical and procombant spike that can reach quite large dimensions (90 cm).
The plant is perennial, with a cycle that goes from 7 to 8 years, which if cut, rejects from the collar.
It has cylindrical but not rhizomatous roots.

Cultivation –
The sugar cane is a plant of the areas with equatorial and tropical climate, so it can be cultivated in similar soil and climate environments.
It usually reproduces by cuttings and the transplantation of rooted cuttings, which is performed at the end of spring, must be followed by abundant irrigation.
Subsequently, in the months that follow, in the main stems and in the secondary sprouts there is the progressive accumulation of sugar in the sap. The sugar content reaches its maximum in the spring-summer period and is maintained throughout the harvesting period. Each plant, after having been cut, recoils and the stems that develop will be harvested the following summer.
The economic duration of a reed bed varies between 6 and 8 years.
For the harvest we proceed to the cutting of the canes at their base; these are deprived of the summit and then transported to the industries for processing.
The juice is extracted by means of horizontal cylinder mills which have the function of crushing and crushing the barrel, also acting as squeezers. The squeezed juice is collected in an underlying tank, to then be subjected to purification, to free it from non-sugary substances that prevent the crystallization of sugar, and subsequent concentration.
The raw sugar that is obtained has a color that goes from yellowish to brown and is consumed as it is or subjected to refining. The yield of the cane in raw sugar is on average 12-14%; the average yield of a reed bed is around 500-600 quintals per hectare of reeds.

Uses and Traditions –
Sugar cane is a plant native to New Guinea and the Indo-Malay regions that was introduced into Europe by the Arabs, first in Spain, around 700 AD. and then in Sicily, in 900 AD, afterwards the Spanish Conquistadores spread it throughout the West Indies after the discovery of the Americas.
Sugar cane cultivation was very profitable before the beginning of the nineteenth century when sugar was also industrially extracted from sugar beets.
The history of sugar cane is obviously related to that of sugar beet and, together with the use of sugar.
In fact Greeks and Romans knew sugar, imported from the East in small quantities, and used exclusively for therapeutic purposes. It was the Arabs who introduced it to Spain and Sicily and its partial diffusion in our peninsula came about thanks to the Maritime Republics. Rare and expensive, because it is made from sugar cane typical of tropical climates, it did not enter into everyday use as a sweetener, but was treated as a medicinal spice to be sold in apothecary shops.
With the increase of its importation, in Venice many families got rich to the point of being called “sugar king”.
Tolls were required to allow them to pass through various countries, so much so that a sugar bread could be worth as much as a silver bread of the same weight.
The “white salt” or “sweet salt” was long identified as an element of power and distinction of the noble classes, both dusted on dishes to embellish them, and modeled in the “triumphs” that adorned the banquet tables. Slowly, as shown in the recipe books of the ‘300, sugar entered the preparation of many foods, increasing the composition of complex sweets, and contributing to enhancing the sweet-sour taste that attracted the man of the time.
The discovery of America, with its vast tropical territories, suggested to Europeans the possibility of obtaining great profits by growing sugar cane in Brazil and the islands of the Antilles.
Christopher Columbus wrote in 1494: “I didn’t bring as many sugar cane as I wanted. I have a great desire that there be plenty of them. Here there is land to make plantations … “.
With the spread of “cane” crops also in the Atlantic islands (Canary and Azores), thanks to Spaniards and Portuguese, the cost of “sweet salt” became more accessible, and the matter saw its use increase in the kitchen of the upper classes, giving rise to rich and imaginative desserts especially in Italy.
We have to wait until the eighteenth century because the “sweet salt” began to be a widely consumed product, also used in “fashion” drinks such as coffee and chocolate.
In Napoleonic Europe this “sweetness” was lacking due to the continental block, and the cane sugar was replaced with beet sugar, rediscovering the intuition of Olivier De Serres who in 1575 had obtained the “white salt” from the red beets.
Due to strong protectionist interests, cane sugar circulated freely on our continent only after 1915.
Today, in the countries where it is grown, it is mainly used for the industrial production of sugar but also for the use of fresh pressure sauce (guarapo) and for the production of alcoholic and distilled fermented wines (rum and other liqueurs) and for the production of automotive alcohol.
A by-product of the processing consists of bagasse, an extraction residue from the crushing and pressing of the sugar cane, consisting of the fibrous part and the bark of the cane. The bagasse is already produced in the first cycle of squeezing and crushing the barrel, the one in which, at increasing pressures, it is possible to obtain the extraction of 90% of the sucrose present in the barrel. The residue thus produced is subjected to a subsequent re-use cycle, after having been impregnated with water, which completes the extraction of the sucrose, giving rise to a final residue which constitutes about 25% -30% of the processed cane.
As a by-product, it has various uses: in the past, it was also used fresh, in animal husbandry, as a food for animals, according to a use no longer in vogue.
An immediate use, after drying, is that which sees it used as a fuel, even in the same refiners of cane sugar, which, in this way, can become energy self-sufficient.
Other industrial uses see it enter as a second material in production cycles for the production of paper, like recycled materials. The fiber is also used in the production of chipboard for the furniture industry.
Together with other agricultural waste, it can be used in the production of furfural, an organic compound used as a solvent and as an organoleptic enhancer in the food industry.
The ten largest producing countries of sugar cane are in the order: Brazil, India, China, Thailand, Pakistan, Mexico, Colombia, Philippines, Australia and Argentina.

Preparation Mode –
The use of sugar cane, as seen, ranges from food to industrial uses up to the production of biofuels.
The pharmaceutical sector is also obviously heavily involved in the use of sugar.
In the food industry it is widely used in the field of pastry, with the name of cooking sugar, it can be used for decorative purposes, in the form of icing sugar (obtained if ground and possibly scented). Sugar finds other little-known practical applications, for example it can also act as a good stain remover, as well as a cosmetic, if used for a lip scrub. Also, if placed in water in a flower pot, two or three teaspoons of sugar will help keep the flowers fresher. In the case of small lesions or burns, sugar has the ability to prevent infections and fight bacteria. Finally, if rubbed on hands stained with grease, sugar combined with soap will quickly disappear.
Ultimately, we say that on sugar, there are so many of its uses that a separate treatise must be written.