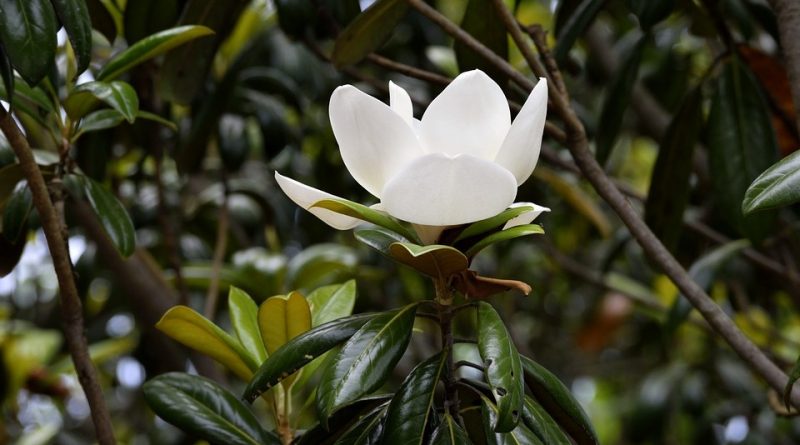 By angiosperms or magnoliophytes we mean the most evolved plants, from the morphological and functional point of view, with real flower and with protected seed.
The main feature that distinguishes Angiosperms from Gymnosperms is the production of the flower which is made up of sterile elements (sepals and petals) and of fertile elements, normally present in the same flower: the stamens in which the grains of pollen differ, and the carpel (or carpels): modified leaves folded on themselves, in which they distinguish, from the apex to the base, the stigma, the stylus and the ovary, which encloses the ova.
The Magnoliophytes are also distinguished because their seeds are wrapped in a fruit, which protects them and facilitates their dissemination. The epithet angiosperms which means “protected seed” derives from the Greek αγγειον, receptacle, and σπερμα, seed.
Angiosperms are a subdivision of spermatophytes, which includes annual or perennial plants with the highest degree of evolution, whose flowers are more showy, more complete or complex than those of other plants.
Angiosperms, depending on whether the embryo has one or two cotyledons, are in turn divided into monocotyledons and dicotyledons.
The origin of the angiosperms, which until the 1950s were believed to have replaced about 130 million years ago, Felci e Gimnosperme, dates back at least to 215 million years ago.
Angiosperms are now represented by about 275,000 species, which correspond to over 80% of all terrestrial plants; for this reason the angiosperms are the largest and most diversified group of plants in the terrestrial ecosystem, with species that are highly diversified in shape and physiology so as to be able to adapt to the most varied climatic conditions.

Among other things, within the angiosperms the mutations, still in progress, allow these species to adapt, relatively quickly, to new climatic and environmental conditions.
The flower of the angiosperms or magnoliofite is more complex than that of the Pinofite (which do not have any of the specialized structures characteristic of conventional flowers), which share with the former the reproduction by means of seeds.
Another important feature of the angiosperms is that they are structured with real tracheae combined with larger and specialized canals that allow more efficient water transport.
Another distinctive feature of angiosperms is that they are the only division of plant species that include true herbaceous plants.
Among the other characteristic aspects of angiosperms we mention:
– the mechanism of zoophilic pollination which, in any case, in the course of evolution has allowed some species to adopt pollination by abiotic agents, such as wind or water. This new adaptation has obviously had morphological repercussions, so that, gradually, the flowers have become small, numerous and inconspicuous. Furthermore anemophilous pollination appeared independently in numerous groups of angiosperms both monocotyledons (Poaceae) and dicotyledons (eg. Salicaceae, Fagaceae);
– the angiosperms present the mechanism of the “double fertilization”, since inside the ovary there are two fertilizations: one of the two spermatic nuclei contained in the pollen granule (transported inside the ovary through the pollen tube) once the ovary, fruitful the Proendospermatic cell (diploid, will become triploid, giving rise to the endosperm of the seed); the other nucleus instead fertilizes the Oosphere (which will give life to a zygote).