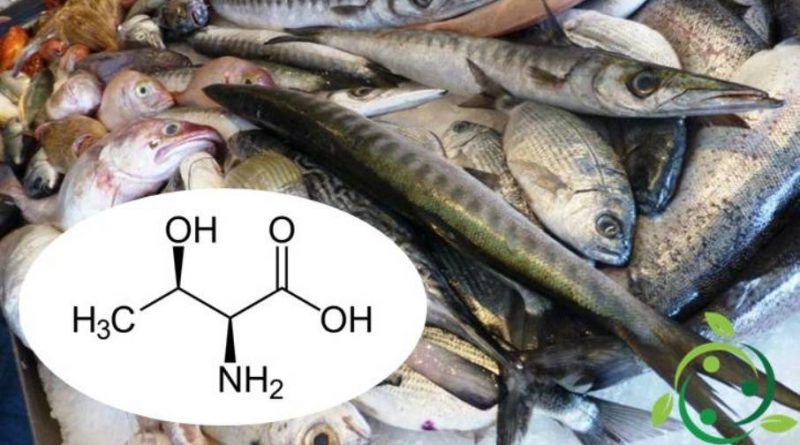 Threonine, chemically known as 2 (S) -amino-3 (R) -hydroxybutanoic acid is α-amino acid with brute or molecular formula: C4H9NO.
This α-amino acid is used in protein biosynthesis.
Threonine is an essential amino acid containing a carboxyl group, an amino group in the α position and a side chain containing a hydroxyl group.
This molecule contains two chiral centers but when we refer to threonine we mean the 2 (S) -amino-3 (R) -hydroxybutanoic acid which, at physiological pH, presents itself as zwitterion.
Threonine differs from serine by presenting a –CH3 group rather than a hydrogen on carbon in β and valine by presenting –OH group rather than a –CH3 group on carbon in β.
Threonine, being an essential amino acid, in protein synthesis is not synthesized from other amino acids but must be taken with food.
Only in microorganisms and plants does threonine come from aspartic acid.
Threonine is the last of the amino acids to be identified and discovered in 1936 by the US biochemist William Cumming Rose.
This amino acid performs its functions by supporting the immune system in the production of antibodies.
Threonine is one of the amino acids of which both animal and vegetable proteins and peptides are composed.
Food sources of threonine are mainly given by eggs, dairy products, meat and fish.
The daily requirement of threonine is about 0.95g / day (8-20mg / kg in the adult) and it is one of the amino acids that are most easily lacking in the vegan diet, that is the one totally free of animal origin ingredients; it is, for example, the limiting amino acid of rice and, after lysine, it is also scarce in other widely consumed cereals.
The mild deficiency of threonine can cause strong psychological irritability and personality disorders; the severe one is difficult to define but certainly very serious. The excess of threonine, on the other hand, is related to a surge in azotemia, with relative impairment of the organs responsible for metabolism and the disposal of excess in the long term.

From the metabolic point of view, threonine, besides constituting a plastic molecule of protein polymers (destined to the constitution of tissues, certain hormones, neurotransmitters, cellular channels, immunoglobulins etc.), acts as a carrier (transporter) for phosphate groups (PO43-) of phosphoproteins (eg, milk caseins), thanks to their ability to receive them at the side chain.
This process allows the chemical-physical characteristics of the polymer in question to be transformed and takes place by means of an enzyme catalyst protein kinase. The best known phosphorylation is that of the transfer of the phosphate group from ATP (Adenosin Tri Phosphate) or from GTP (Guanosin Tri Phosphate) to threonine or serine or tyrosine.
Threonine also participates in many synthesis or metabolization reactions; for example, it is involved in the metabolism of creatine, other amino acids, cobalamin (vit. B12), neurotransmitters (adrenaline and choline) etc.
Moreover, threonine has an important interaction with selenium, an antioxidant mineral, and a fundamental role in the hepatic metabolic processes of waste molecules.
Finally, this amino acid plays an important role for those who do sports. In these people such as leucine, valine and lysine, threonine is also more subject to energy oxidation than other amino acids, which is why it is logical to think that it may require a higher income in the sportsman.
Threonine is also marketed in the form of supplements, mainly due to its potential ability to promote digestive functions, mental health and the synthesis of collagen and elastin.