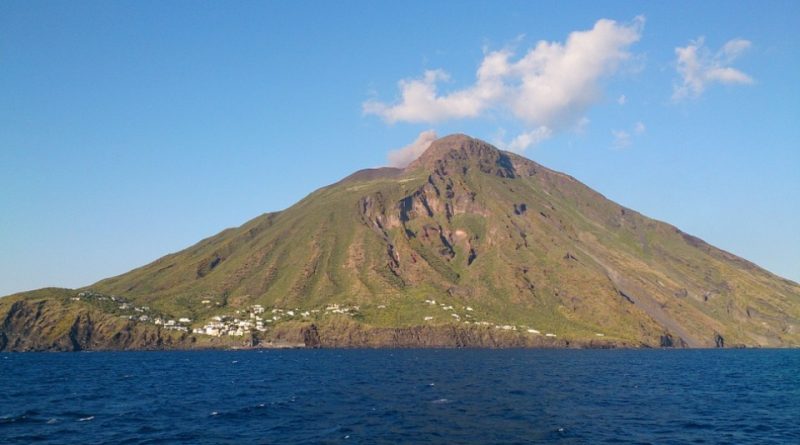 Stromboli is an Italian volcanic island of the Aeolian archipelago, in Sicily, in the Tyrrhenian Sea, with an area of ​​12.2 km².

Geographical Features –
The island of Stromboli belongs to the archipelago of the Aeolian Islands, in the north eastern part compared to Sicily and in a more northern position than the other islands. The geological origins of the island of Stromboli date back to about 200,000 years ago, when a first large active volcano emerged from the sea, in a NE position with respect to the island.
Among other things, Stromboli gives its name to a type of volcano characterized by an effusive volcanic activity called Strombolian.
Today only the solidified conduit (neck) represented by the Strombolicchio islet remains of the ancient volcano. Today this last islet houses a lighthouse of the Navy, uninhabited and automated.

Historical Notes –
Stromboli is an island that was already known and inhabited since ancient times. The prehistoric village of San Vincenzo is indeed known. The island of Stromboli has always based its economy on typically Mediterranean agricultural productions: olive trees, vines (low cultivated Malvasia in terraced gardens), figs but also on fishing and seafaring.
The volcano is called by its inhabitants (strombolani) Struògnoli, or even Iddu (He in Sicilian), in reference to the divine nature that was once attributed to uncontrollable natural phenomena.
The economy of this island ensured a thriving civilization until the nineteenth century, so much so that in 1891 (according to ISTAT) there were about 2,700 inhabitants.
Gradually this situation started to worsen especially after the unification of Italy, also due to the succession of eruptions and earthquakes (in particular the 1930 eruption). To this he gave a blow the advent of the downy mildew that in the thirties exterminated the vine, which forced many farmers of Stromboli to emigrate to other countries including, above all Australia and America; was the period in which the island seriously risked being left abandoned and deserted.
Roberto Rossellini put a certain remedy to this state of abandonment, also in political terms, after the war, which, with the 1949 film Stromboli, land of God (with Ingrid Bergman), brought the island and its extraordinariness to the attention of the public.

Ecosystem –
Stromboli, together with the Aeolian Islands, thanks to their volcanic origin, represents an extraordinary scenario of ecological, landscape and naturalistic diversity where even the human settlement, dating back to the 5th millennium BC, has greatly influenced the structure of the territory.

Flora –
The vascular flora, typical of the central Mediterranean regions, has about 900 species, while scientific information on non-vascular flora (such as fungi, algae and lichens) are more deficient. In the Aeolian territory it is not difficult to find exotic species such as eucalyptus, acacia and alnus; instead, the presence of Pinus is due to the more or less recent result of reforestation. The floristic population is composed of plants widespread in the Mediterranean area with a prevalence of herbaceous plants that constitute about 80%; the remaining 20% ​​is composed of woody plants. The flora and fauna heritage is due to colonization processes in which man has certainly played a predominant role with the introduction, active or passive, of numerous species. From a biogeographical and ecological point of view, endemic species such as the podarcis raffonei and the elyomis quercinus liparensis, which are found in very limited areas, are of considerable interest. The native woods, intact from human manipulation, can be admired in all their beauty in Stromboli in the town of Fico Grande, in Vulcano in the area of ​​Gelso, in Lipari in the Pirrera area and, moreover, in areas that are difficult to access for man. This factor has allowed the ecosystem to remain intact in its natural aspect, since it was difficult for man to have access to these areas. These woods are mainly composed of holm oak, heather, honeysuckle, manna ash and arbutus. The impoverishment of the forest heritage has led to the substitution of the arboreal plants with the Mediterranean maquis, shrub vegetation which, to date, covers most of the Aeolian territory. The Mediterranean scrub is made up of fragrant broom (Spartium junceum), cysts (cistus monspeliensis – creticus – salvifolius) and endemic broom (Genista tyrrehena) which can be found in their most luxuriant form at a height of 350 m, thanks to the high nighttime humidity even in summer. Bougainvillea, prickly pears, dwarf palmettes that spontaneously decorate the landscape with their colors and shapes are easily identifiable throughout the Aeolian territory. One of the crops that has distinguished itself over the centuries and which, to date, represents a large production reality, is that of the caper. The latter is exported in special amphorae since Roman times. Bumping into caper plants is really simple because they are easily found throughout the territory, they are perched on the embankments and rocks. The caper, besides being one of the pivots of the local cuisine, is a great source of income along with the Malvasia. Both of these products are exported all over the world. Among the aromatic shrubs, which deserve particular attention also for the culinary use that is made of them, we find rosemary, thyme, heliotropy and lentisk. The fruit trees, which deserve particular attention for their diffusion, are the fig, the almond, the plum, the carob and the prickly pear.

Environmental Safeguard Actions –
The safeguard actions of the Stromboli microsystem must be aimed at an ecological recovery both in terms of flora and fauna. This recovery must also be commensurate with the need to redirect the agricultural economy towards agro-ecological forms of protection.
To this we must add the indisputable necessity of the implementation of a protocol that allows to regulate tourism towards eco-sustainable forms both as regards the marine environment and the terrestrial environment.
An interesting initiative could indeed be to provide tourist companies or tourists with isolated rules of behavior and information sheets on the ecological system of the Aeolian Islands.