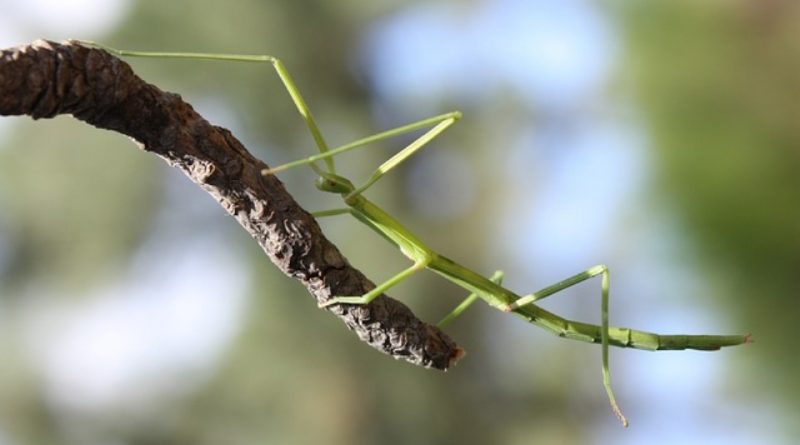 The stick insect (Bacillus rossius Rossi, 1788) is a large insect of the Bacillidae family.

Geographical Distribution and Habitat –
Bacillus rossius is an insect that is easily camouflaged with the environment because of its color (ornocromia) and its shape (ornornorfisrno); in this activity it imitates stems, twigs, twigs, leaves, and similar plant parts.
It is an insect that lives in the north-western Mediterranean, especially in Spain, southern France and Italy in habitats represented by rather humid and airy environments.
This species includes eight subspecies, present from North Africa to Southern Europe.

Morphology –
The stick insect is characterized by a color that can vary from green to light brown; the females are distinguished because they have the abdomen surrounded by a thin clear line. The nymphs are light green and with the exception of the dimensions, they are identical to the adult individual.
The species has a certain sexual dimorphism, in fact the females, which can reach 10.5 cm, are much larger than the males, which measure about 6 cm.
They have short antennas.

Attitude and biological cycle –
The Bacillus rossius cycle begins with the hatching of the eggs that have been laid on the ground. The eggs are laid at night by the females, up to a maximum of 16, which simply make them fall on the ground. In total, a female can lay more than 1000 eggs during her life.
Eggs resemble the shape and color of herbaceous plant seeds; they are light in color with dark spots tending to black and are about 2 mm large.
As soon as they are born the nymphs are, as mentioned, quite similar to adults and reach maturity in some months after a series of mute that can go from 5 to 10.
Reproduction is amphigonic, but can also occur by parthenogenesis.
This insect in central-southern Italy reproduces amphigonically, while in Tuscany, Marche and Emilia-Romagna exclusively parthenogenic populations are found, which through a normal meiosis develop eggs that self-activate and lead to the formation of haploid germs, which, for anaphasic restitution, diploidize by developing a normal embryo.
The peculiarity of optional parthenogenesis allows any female from the parthenogenetic populations to be fertilized by a male and is able to produce, in addition, a deuterotoca lineage (including both sexes) and, of course, females that usually reproduce by amphigony ; these isolated from the males, can give ovature with a certain descent progenitor, with a clear tendency, deposition after deposition, to obtain very high yields compared to the first depositions in the absence of males.
However, the stick insect has two generations each year: the first in the spring, the second in the summer. The eggs of the second generation survive the winter, while the insects do not survive in the cold season but in captivity they can survive until the following March simultaneously with the birth of the next generation.

Ecological Role –
Bacillus rossius is an insect that feeds on hazelnut, bramble, raspberry, apple, beech or rose leaves.
The physical structure allows this insect, both in the adult stage and in that of the nymph, to blend very effectively between the twigs of the plants on which it feeds, resembling it considerably.
It is easier to meet him at night, as he is an animal mostly with nocturnal activity but also by day hidden under the leaves of the host plant. When this insect rests or feels a danger it becomes immobilized thus managing to blend perfectly with the twigs of the frequented shrubs. Often even when they are caught they remain immobile and rigid as if they were inanimate pieces of wood (thanatosis), this adaptation, independent of the will of the insect, which responds to a nervous reflex with a defensive function. The same type of reflex pushes these insects, in situations of extreme danger, to instinctively amputate one or more limbs (autotomy) which with the subsequent molts, like young shoots of a branch, grow again. The new limbs are distinguished from the old for the shorter length.
Although the insects are not easily identified, the fasmids are well known insects. One of the local names of some areas of Italy is, in fact, scippa pili, that is, it tears hairs, because often the fasmids have been found clinging to the hair (hair) of the flowing foliage after a walk among the shrubs of the bush.