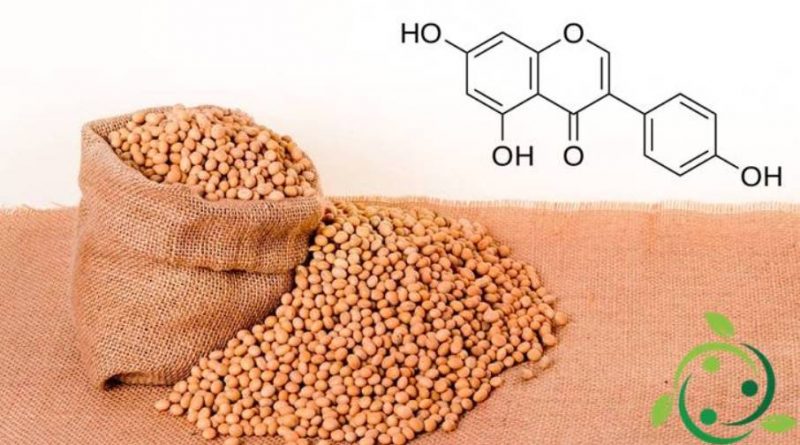 Genistein whose term in the IUPAC nomenclature is 5,7-Dihydroxy-3- (4-hydroxyphenyl) chromen-4-one and whose brute or molecular formula is: C15H10O5 is an isoflavone.
Genistein owes its name to the fact that it was first isolated in 1899 from the broom tincture (Genista tinctoria) of which it bears the name.
Its chemical structure was first defined in 1926 and its artificial synthesis in 1928.
Genistein is found in abundance in soybeans and soy derivatives and more generally isoflavones, such as genistein and daidzein, are found in a number of food plants as a primary source of food: among these is the lupine, broad beans, soy, kudzu, psoralea and Maackia Amurensis but also in medicinal plants such as Flemingia Vestita and coffee.
The effectiveness of genistein is linked to its chemical structure very similar to estradiol, an estrogen produced by the ovary in the fertile phase of a woman’s life, which gives the molecule an action similar to estrogen due to its ability to bind to the same receptor (ie to the radar antenna on which the activity of the molecule inside the cell depends). In particular, genistein binds with high affinity to beta-type estrogen receptors (ERb), abundantly present on the skin and in particular in fibroblasts.
For this reason, many studies are trying to evaluate the effectiveness of genistein as an anti-aging molecule.
In this sense, genistein turns out to be the ideal natural hormone as it is capable of countering those processes of aging of the skin of menopausal women, of which the reduction in thickness is one of the most obvious signs.

In fact it has been confirmed histologically as genistein is able to increase the thickness of the dermis for an increase in collagen production and a control on metalloproteinases (MMPs), enzymes responsible for the degradation of collagen fibers.
A team of US researchers in collaboration with Italian researchers has shown that genistein has a comparable efficacy to estrogens in repairing some molecular damage, some histological and functional alterations of the skin in a situation of estrogen deficiency, therefore similar to menopause, in the animal model.
Another interesting action of genistein is the antioxidant and anti-inflammatory action, especially as a protection against damage from solar radiation.
The antioxidant action against oxygen free radicals (ROS) and nitrogen (NO) produced by the skin during exposure to ultraviolet radiation gives genistein an important anti-inflammatory function (photo protection) as well as protection against photo-induced skin tumors.
Moreover, recently, some research would indicate that genistein can also be considered as a drug for still incurable genetic diseases; such as mucopolysaccharidosis (CF) cystic fibrosis and (MPS). In vitro and animal model studies and pilot clinical studies suggest that this plant-derived compound may be a real hope for patients with serious hereditary diseases with relatively complex pathogenetic mechanisms, such as those affecting the central nervous system.