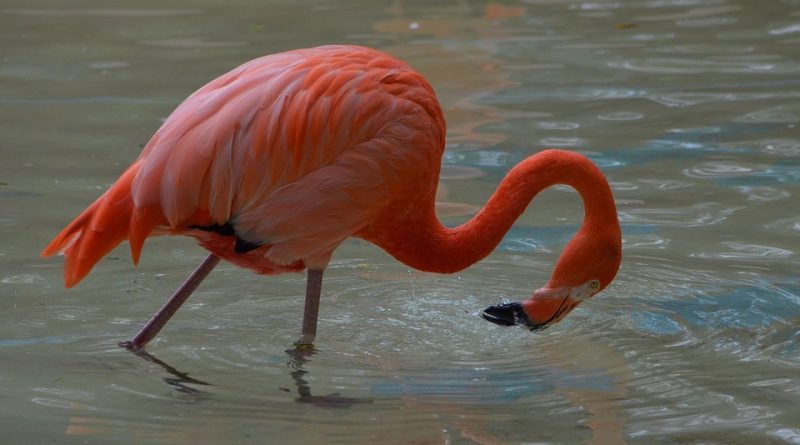 The pink flamingo or greater flamingo (Phoenicopterus roseus Pallas, 1811) is a large bird of the Phoenicopteridae family.

Geographical Distribution and Habitat –
The pink flamingo lives in Africa and southern Asia (Pakistan and India) and is the only species that nests in southern Europe. We find it in France (Camargue), Spain, Turkey, Albania, Greece, Cyprus and Portugal.
In Italy it regularly nests in Emilia Romagna, Puglia, Sardinia, Sicily; rarely in Tuscany and Veneto. 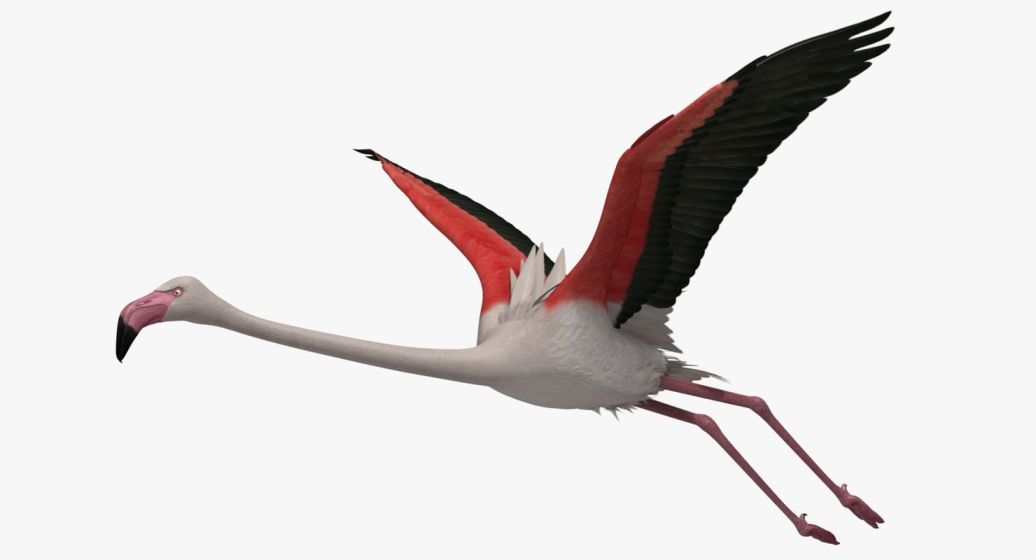 Description –
The Phoenicopterus roseus Pallas is recognized for its dimensions that are remarkable and this facilitates its recognition when present, mixed with other species, within the immense African flocks.
It has a length of 100 cm that reaches 150 cm if we include the very long legs. It has a weight from 2 to 4 kg and a wingspan of 150 cm.
This bird is characterized by having a very long and slender neck that takes up almost half of its total length and that at rest often keeps coiled on itself in order to support the very strange and enormous beak between the feathers of the back. When in flight it is instead kept lying forward and its beak boldly leaning upwards.
As with the Phoeniconaias minor this unusual beak, at first sight indecipherable, serves to filter thousands of liters of water a day. A natural pump that sucks and at the same time pumps outside with a very fast and continuous movement of the squat and round tongue, which works practically like a tireless plunger of a hydraulic pump, holding microscopic between the very narrow edges that surround the edge of the beak algae and small crustaceans that make up their diet.
The legs are practically of the same length of the neck so much that when it feeds dipping the beak in the water, it does it staying upright without the least hint of bowing. The body is stocky and when in flight it is held above the line formed by the neck and legs which are instead falling forward and back respectively as if too heavy and long for their size.
The basic color of the greater flamingo is white and only the wing coverts show the pink color that gave it the scientific and vulgar name.
The remiges are black and like the pink coverts, they are visible only when the bird is in flight. At rest only a few reddish feathers appear that match the long legs and beak, which are also of the same color. Even the eyes are bright pink.
The beak is solid and curved at half its length, 90 ° downwards, precisely for the needs described above. The tip of the beak is black. The fingers are webbed.
Between male and female there is no obvious sexual dimorphism except for a slight and smaller size of the female.
The juveniles do not highlight the pink color, evident in adults, which is acquired only in the third year when they reach maturity.
The scientific name of the flamingo has a Latin etymology: phoenix = phoenix (interpreted as “purple”, from the color of the phoenix) and pteron = wing; which is literally translated as “purple wings”.

Biology –
Phoenicopterus roseus feeds on microscopic crustaceans such as Artemia salina and particular brackish water organisms such as those belonging to the genera Chironomus, Arthrospira, Oscillatoria, Lyngbya and Navicula. Entities that are infinitely small and practically invisible to the human eye, which require careful filtering to be intercepted and assumed. Like all flamingos, the capture of these microorganisms takes place by keeping the beak upside down with the upper jaw submerged under the surface of the water and the lower just outside.
This species is monogamous and forms stable pairs only during the nesting period. The nest is built by both partners by heaping mud mixed with algae and vegetables to form a small truncated cone so as to keep the single egg dry from any unexpected and rising water level.
The nests are placed at such close distances that they sometimes do not exceed 50 cm from each other. The hatching is alternated between the sexes.
Furthermore, as it nests in large colonies, this allows it to create a defensive line towards the numerous predators even if very little can do when it comes to eagles, large strigids, marabu (Leptoptilos crumenifer) and also hyenas and jackals.
The eggs hatch after about 30 days and when they are born they are covered with greyish down that will keep up to the growth of the first livery. Maturity occurs after the third year even if the first reproduction can take place even after several years.
Flamingos are able to take flight only about 90 days after birth. As mentioned the flamingos are long-lived even in their natural state so it is not considered an endangered species. It is widely protected throughout the European continent.

Ecological Role –
The pink flamingo has been known in Europe since the time of the ancient Romans, when it was kept in captivity for its particular features, for its elegance and for the color but even more for its language which was considered a refined culinary delicacy.
The particular docility that this bird shows when kept in captivity, makes it suitable to live in any zoo or naturalistic park even if over time it tends to lose much of the color that characterizes it in its natural state.
They are also birds very resistant to temperature variations as well as very long-lived, so that a few years ago a glorious record was beaten by a specimen that lived in the Adelaide zoo in Australia for 83 years.
The pink flamingo feeds mainly on small invertebrates, such as crustaceans and larvae of Chironomus sp. but also of algae and fragments of aquatic plants that live in strongly saline and alkaline waters, environments that are difficult to reconstruct within artificial structures.
Some of these foods (for example Artemia salina) are rich in beta-carotene, a red-orange pigment that settles in developing feathers, giving it its characteristic pink color. In captivity, this deficiency is partially replaced with artificially colored foods.
All the members of the flamingos family depend strictly on the particular feeding and the places where such food is present.
The presence of this bird is therefore linked to brackish marshes, lakes with alkaline waters, coastal marshes open to the inflow of sea water, to settling tanks for extracting sea salt.