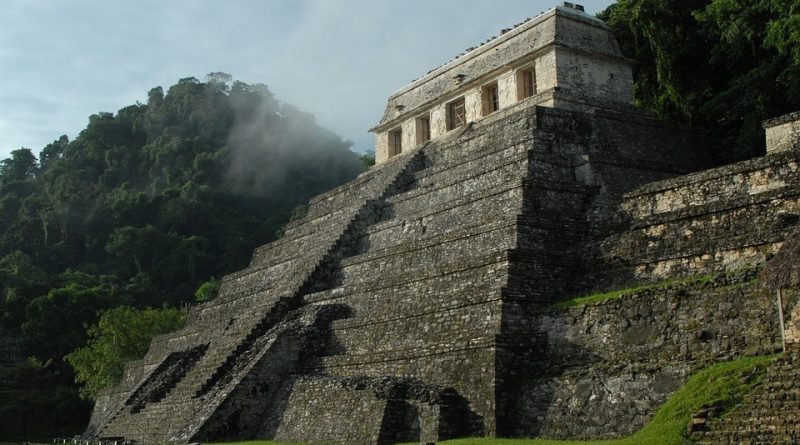 Mexico is a representative democracy composed of thirty-one states and the capital city of Mexico. Mexico occupies the southern part of North America, and the northern part of Latin America.
Mexico is bordered to the north by the border with the United States of America, to the east by the Gulf of Mexico and the Caribbean Sea, to the south-east by Belize and by Guatemala and to the west by the Pacific Ocean. It covers an area of ​​1,972,550 km² (at the fourteenth place among the largest states in the world) and is populated by 117,409,830 people, which makes it the most populous Spanish-speaking country. The Spanish language lives in Mexico with many indigenous languages, officially recognized.
Mexico is the site of a human settlement dating back some eleven thousand years, a period in which various peoples, both Mesoamerica and nomadic farmers, followed one another. After the Spanish conquest, Mexico began its struggle for political independence in 1810. Later, for almost a century, the country was involved in a series of internal wars and foreign invasions that had a strong impact in all areas of the Mexican life. For most of the 20th century (mainly for the first half) there was a period of strong economic growth in the context of a policy dominated by a single political party.
Mexico is characterized by a coastal development of 11,122 km and occupies second place in America after Canada for miles of coastline.
The Mexican territory is largely mountainous; the Yucatán Peninsula and the coasts on the Gulf of Mexico are exceptions. Several reliefs exceed 4,000 m or even 5,000 m; the highest peak is that of the Citlaltépetl (Pico de Orizaba) (5,610 m), which is part of the Transversal Volcanic Range. The main mountain ranges are the Sierra Madre Occidental and the Sierra Madre Oriental, among which extends the Central Plateau of Mexico (in which stands Mexico City).
Among the numerous rivers in the country the most important is the Río Bravo, which traces the border with the United States and flows into the Gulf of Mexico.
Also divided between the Atlantic Ocean and the Pacific Ocean are numerous islands, which all together reach an area of ​​5 073 km²; the main ones are: the Revillagigedo (Socorro, Clarión, San Benedicto, Roca Partida), and the Marías Islands, in the Pacific; the Guadalupe islands, Cedros, Ángel de la Guarda, Coronado, Rocas Alijos, Tiburón Island, Isla del Carmen, facing the Baja California peninsula and the coasts of Sonora; and those of Ciudad del Carmen, Cozumel, Isla Mujeres. Moreover, Mexico has various swamps, lagoons and deserts, as well as tropical forests and beautiful coasts.
The proximity of the sea and the predominantly mountainous territory guarantee Mexico a great variety of ecosystems and natural habitats, characterized by a remarkable biodiversity: in fact, in the country there are numerous species of reptiles and mammals and 14% of the world’s fish species. Almost a third of vertebrates and about half of plant species are endemic.
The explosive demographic growth of the country and its considerable need for resources have had very serious consequences on the environment. Agricultural expansion and cultivation methods are not well controlled. Erosion and salinization of the soil, pollution of watercourses and groundwater by agricultural chemicals are widespread. The most serious environmental problems are found in Mexico City, one of the most populous metropolis in the world. The high concentration of industries, traffic and high energy consumption for domestic use, combined with unfavorable geographical and meteorological conditions, translate into serious air pollution. The deforestation rate is high (0.46%) and an increasing amount of forest area gives way to crops. 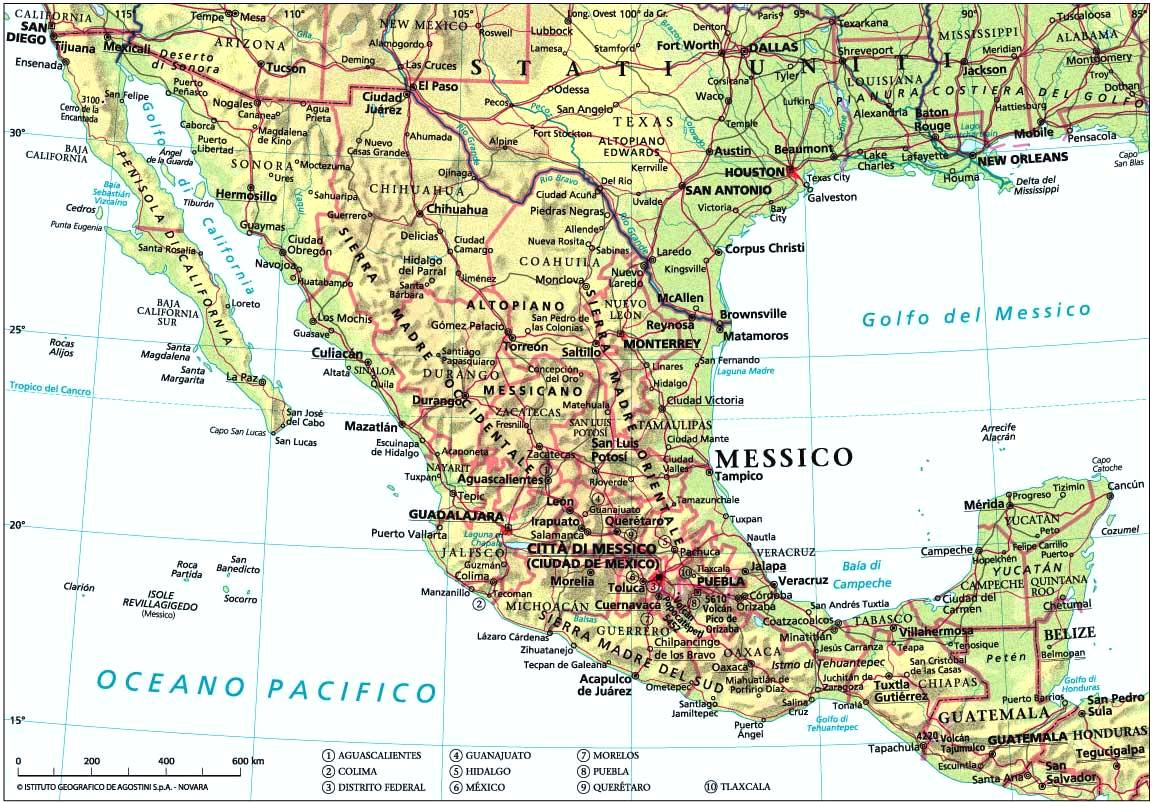 Flora –
The great variety of Mexican flora is closely linked to climatic differences: cacti, yucca, agave and mesquite grow in the semi-desert regions of the north, while the tierras calientes offer lush vegetation that in some areas thickens to give rise to tropical forests. Also in these regions, besides fine woods, coconut palms, rubber trees, almond trees, fig trees and olive trees grow. On the mountain slopes there are oak, pine and fir woods. Finally, in the so-called tierras hieladas, that is over 4,000 meters above sea level, there are examples of arctic vegetation.
The tropical rainforest, which once covered 6% of the territory, is now reduced by half. All natural habitats are threatened: deciduous mountain forests, mangrove forests, coastal wetlands, tropical rainforests, dry tropical forests and arid areas. In total, forest areas cover 32.8% of the territory (2005). Environmental protection in Mexico dates back to the time of the Mayans, when special forest reserves were recognized and the development of agriculture obeyed a strict system of ecological criteria. The ancient traditions of land management were lost after the conquest of Mexico by the Spaniards and the degradation continued until the end of the nineteenth century, when modern environmental protection legislation began.

Fauna –
Also the fauna is extremely diversified according to the different climatic zones; the wolf and the coyote inhabit the arid northern regions, while in the woods of the mountain slopes the ocelot, the jaguar, the peccaries, the bear and the puma find shelter. There are also numerous species of reptiles – including the tortoise, the iguana, the rattlesnake and the alligator and, along the coast and in the estuaries of the rivers, of fish.
Fortunately, in recent times, an environmental protection policy has begun to create remarkable ecological protection areas.
Already in 2007 there were 68 protected areas in Mexico, including 46 national parks; among the major ones by extension we mention the Cumbres de Monterrey (established in 1939), the Nevado de Toluca (1936) and the Cañón de Río Blanco (1938). However, the extension of many of these areas is not well defined and the degree of protection varies according to the classification of the territory. Only 8.7% of the country’s surface is therefore effectively protected; deforestation, poaching, landfills, devastation caused by the mining industry, excessive exploitation of pastures and erosion represent a constant threat. In addition, 16 biosphere reserves have been established in the UNESCO as part of the MAB program (Man and the Biosphere, the man and the biosphere).
Among the 27 Mexican World Heritage Sites are the ruins of Teotihucan, Palenque and the archaeological sites of Chichén Itzá and Monte Albán. Mexico has ratified the Convention on the Law of the Sea and has adhered to numerous international environmental agreements on biodiversity, climate change , desertification, endangered species, disposal of hazardous waste, waste disposal at sea, protection of marine life, abolition of nuclear tests, protection of the ozone layer, marine pollution, conservation of wetlands and whale hunting. At local level there are also agreements for the protection of the Caribbean Sea and an agreement for the protection of nature and the conservation of fauna in the Western hemisphere. “Mexico” Origin: Emmanuel Buchot and Encarta.