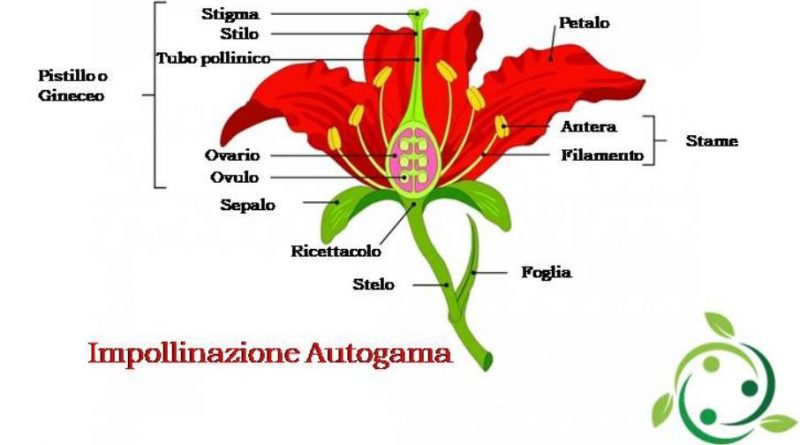 Autogamous pollination or self-pollination or homoclinic pollination is a form of pollination that occurs when pollen passes, or falls directly from the anther of a flower to the stigma of the same flower. The plants that practice this type of pollination are called autogamous.
Autogamous pollination is only possible in the “Hermaphrodite” flowers and is frequent in annual “short-lived” plants and in plants where the flower does not hatch.
The plants that use self-pollinated pollination are those that can fertilize themselves, as mentioned, thanks to hermaphrodite flowers (that is, they have both sexes) or flowers on the plant itself.
In this sense the autogamous plants are divided into:
– Forced if 100% of the flowers reproduce in this way;
– Prevalent if the ≥ 50% of the flowers reproduce in this way.
A very narrow type of self-pollination (cleistogamy) occurs in the wheat, when the spikelet has not yet opened up.

To avoid self-pollination, in many flowers pollen and eggs of the same individual mature at different times, or the stamens are placed lower than the stigma.
In any case, in most cases there are adaptations to avoid self-pollination, which is less advantageous than cross-pollination which favors the appearance of new genetic combinations.
Angiosperms have evolved particular mechanisms to avoid self-pollination. One of these is the production of unisexual flowers on individuals of different sexes (dioecious species). Other mechanisms are known in species with hermaphrodite flowers and in the monoecious ones. One of the most frequent is the maturation of the gynaeceum and androcean at different times: phenomena defined respectively proterogrena and proterandria.
Another mechanism is self-incompatibility, that is the impossibility for a bisexual plant to produce zygotes with its own pollen. Self-incompatibility is genetically controlled in many species by multiple alleles of a gene called S. Both gametophytic self-incompatibility and sporophytic self-incompatibility are recognized.
Geitonogamy is the type of pollination that occurs when the pollen of a flower anther is transported to the stigma of another flower of the same plant, which is therefore called self-fertile.