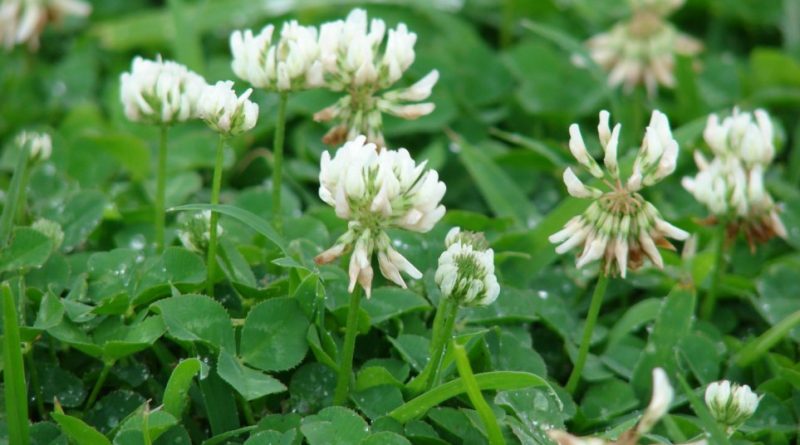 Systematics –
From the systematic point of view it belongs to the Eukaryota Domain, Kingdom Plantae, Sub-Trinchebionta Sub-Division, Magnoliophyta Division, Magnoliopsida Class, Subclass Rosidae, Fabales Order, Fabaceae Family, Subfamily Faboideae and then to the Genus Trifolium and the Species T. repens.

Etymology –
The term Trifolium derives from the three-word prefix and from fólium foglia: for the leaves composed of three leaflets. The specific epithet repens comes from the participle of répo crawling: creeping.

Geographical Distribution and Habitat –
Trifolium repens is a paleo-temperate species that has become sub-cosmopolitan. The origin is uncertain, according to some authors of the Eurasian air, while for others in North America and others in both areas.
Currently the white clover is widely cultivated all over the world as a grazing essence and is today very common also in the grassy areas of North America and New Zealand.
Its habitat is represented by multiple types of soil with the exception of those that are too compact or too sandy. In Italy it is possible to find this plant on the edge of the woods, on the large lawns and along the country paths. It is found from the basal plane up to 2.750 m s.l.m. 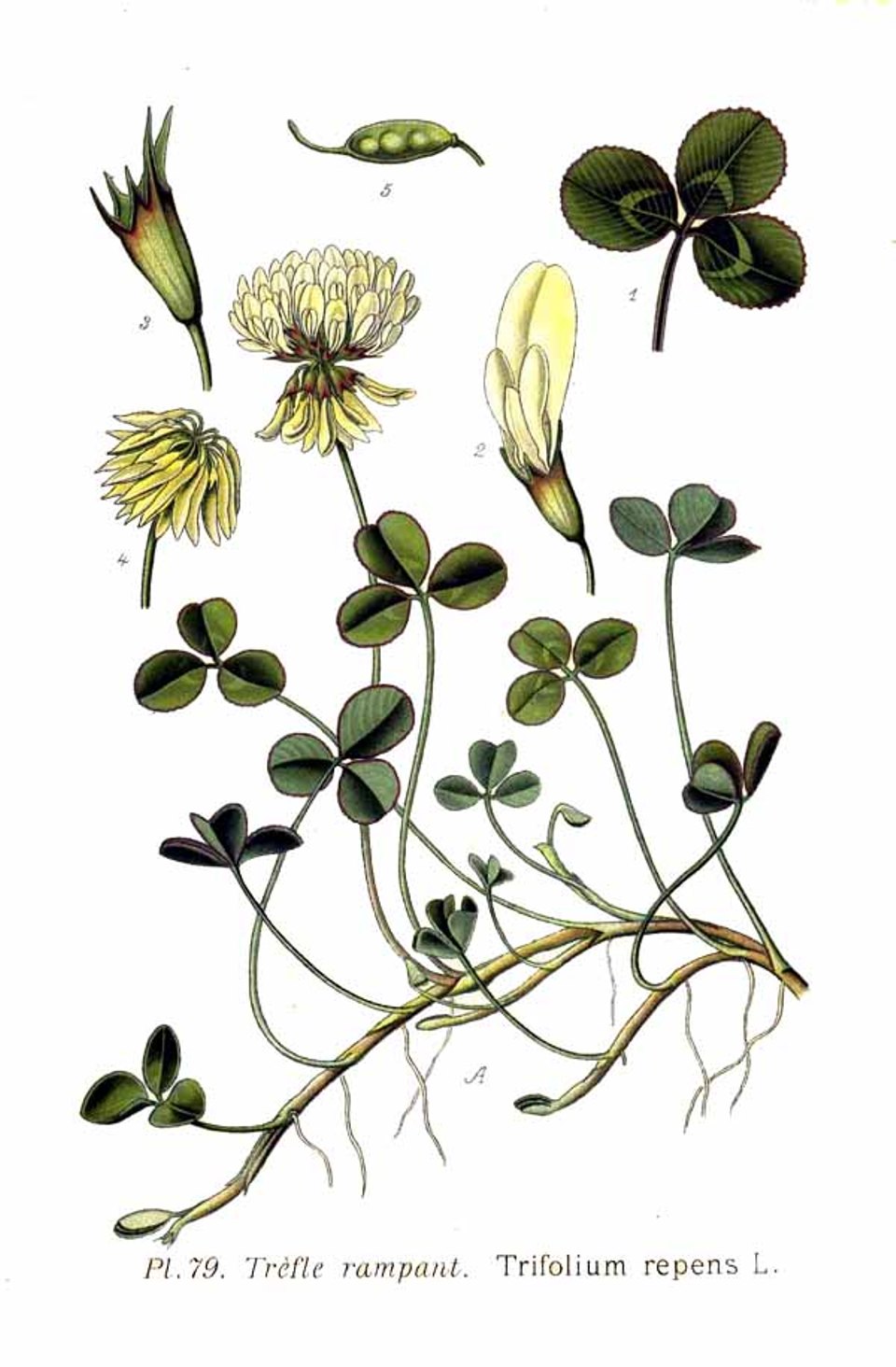 Description –
The white clover is a herbaceous species with prostrate stems, creeping on the ground, called chains, capable of emitting adventitious roots from the nodes; these chains that continuously extend and renew themselves give the crops a remarkable duration.
From the knots of the chains, roots, leaves and flowers sprout, behaving like new plants independent of the mother plant.
This species is characterized by trifoliate leaves, glabrous, carried by a long erect petiole. The leaflets have a slightly oval shape, denticulated on the whole margin, with strong veins and light green spots.
The flowers are gathered in solitary globular heads, white, greenish or pink, composed of 40 ÷ 80 elements at the apex of erect and glabrous peduncles. After flowering the flowers become pendulous and brown. The campanulate chalice, with 10 ribs, is divided into 5 pointed teeth (2 long and 3 short). The papilionaceous corolla contains 10 stamens, of which 9 with welded filaments.
The fruits are legumes, linear, flattened, with 3 ÷ 4 heart-shaped seeds, of variable color: yellow, orange and red that remain in the dried glass.

Cultivation –
White clover is a plant suitable for humid temperate climates. It prefers light soils, but not sandy, well supplied with lime, not necessarily deep as long as they are irrigated.
In the alternation the Trifolium repens takes the place between two cereals: wheat or rice, the rice is the best precedent because perfectly re-soiling the land from the terrestrial herbs guarantees a pure and long lasting ladin.
The sowing of the ladinaio can be done in different ways:
– in bulatura in the wheat, in spring with 5-6 kg / ha of seed;
– with the forced lawn system: when you want to have a pure ladin, of high productivity and long duration, they are sown in autumn, on land previously cultivated with wheat and well worked, 5-7 Kg / ha of Ladin seed and 100 Kg / ha of rye seed; in April the rye is mown, as is its thriving after about twenty days, after which pure Ladin will flourish.
Irrigation is absolutely necessary, with abundant water and frequent shifts, usually carried out with the irrigation method of the esplanade. The adacquature are suspended as the cuts approach to prevent the forage, which is too watery, from being harmful and to avoid excessive and harmful trampling.
Among the necessary cultivation practices, the autumn harrows are revealed to aim to air the soil too hard and to favor the formation of the chains: harrows with sharp organs must be used, which cut the chains, rather than tear them.
Particular importance for the good production and maintenance of the lawn has the use of the compost in cover: this organic fertilizer (it is manure mixed on the ground and matured) supports and fertilizes the plants and facilitates the extension and the rooting of new chains.
A meadow of white clover can give 4 to 6 cuts a year and generally lasts 4 years.
It has an average annual yield of 10-12 t / ha of excellent hay, with peaks of 12-15 t / ha.
A good ladino hay has the following composition: s.s. 84%, crude proteins 18-19%, U.F. 0.6 per kg of s.s.
The purest and therefore youngest Ladin people are destined for seed production, with a yield that can be around 150 kg / ha.

Uses and Traditions –
White clover is together with alfalfa, one of the most widespread forage legumes in the world. In any case the white clover grown in the monolith meadows is different from the one found spontaneously in the pastures and uncultivated areas, in fact for the intensive cultivation a special ecotype is used, selected in the Po valley, known with the name of ladino and corresponding to the botanical variety Trifolium repens var. gigantem.
The white clover is the most adaptable of the clovers and for this it plays a notable importance in the improvement of the pastures or in the plant of the pastures-meadows, for which the more rustic and adaptable forms are to be chosen.
White clover is considered a beneficial component for the organic care of the lawn thanks to its nitrogen-fixing ability and its ability to eliminate weeds. For this reason, from an agro-ecological point of view, natural nitrogen fixing reduces the absorption of nitrogen from the soil and helps to reduce the incidence of those lawn diseases that can be favored by the presence of synthetic fertilizers.
The white clover forage mowing consists exclusively of leaves and inflorescences with their petioles: it is therefore very watery, but also very digestible.
It should be noted that in addition to feeding the cattle, the white clover is a precious food, highly rich in proteins, very widespread and also appreciated in the culinary field. This plant has been used for centuries as an ingredient in salads and other vegetable-based dishes.
Consider, however, that for the human species, the clover is rather difficult to digest raw, a problem that is overcome by cooking the plants collected in boiling water for a period of 5-10 minutes.
Furthermore, from the flower heads and dried pods it is possible to obtain a very nutritious flour, but they can also be immersed in water to obtain a fragrant herbal tea. Finally, white clover flour can be spread as a condiment on cooked food.
To be used in soups, the leaves must be harvested before the plant flowers. Even the roots are edible, but only after being cooked.
Some substances have been found in the leaves and flowers of the white clover; twelve different types of flavonoids are found, triterpensaponins, isoflavonoids and cumestrol with estrogenic and bicumarin effect.
White clover is a plant with anti-rheumatic, purifying, ophthalmic, detergent and tonic properties.
In fact for many centuries this plant has been used in the traditional medicine of some Native American tribes, such as the Cherokee, the Iroquois and the Mohicans. The Cherokee, for example, used an infusion prepared with this plant to treat fevers and nephritis. The Lenape and Algonquins, on the other hand, used the same infusion to treat coughs and colds.
Nowadays, the extracts of Trifolium repens are indicated against digestive disorders, rheumatic pains and inflammation of the respiratory tract. For external use, it has antiseptic properties.

Preparation Mode –
The white clover, as mentioned, as well as for forage uses can usefully be used for human nutrition and for pharmaceutical purposes.
This plant, after cooking, has been used for centuries as an ingredient in salads and other vegetable-based dishes.
A very nutritious flour is obtained from the dried flower heads and pods and from these it is possible to prepare fragrant herbal teas. Finally, white clover flour can be spread as a condiment on cooked food.