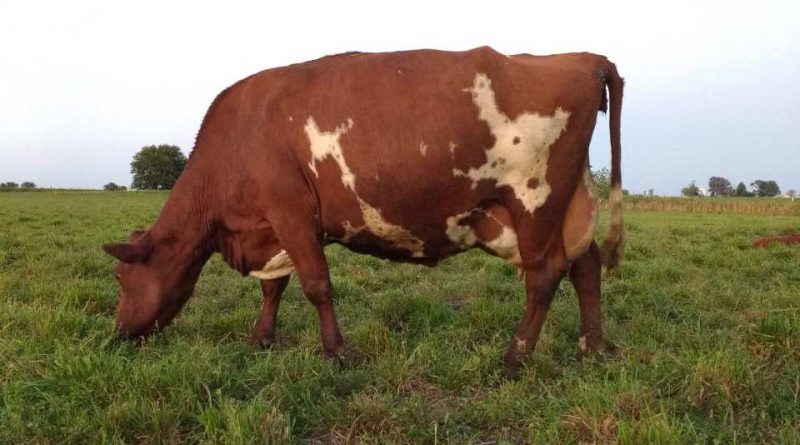 The Milking Shorthorn breed, also known as the Dairy Shorthorn, is a bovine breed (Bos taurus Linnaeus, 1758) bred mainly in the county of Durham in Scotland and Great Britain, with a dual aptitude for meat production and milk.

Geographical and area distribution –
The Milking Shorthor is a breed bred mainly in Great Britain but also present in other countries such as the United States, Australia, South Africa, Canada and New Zealand.

Origins and History –
The Milking Shorthorn is a breed originating from the county of Durham in Scotland and bred mainly in this county and in Northumberland and Yorkshire in north-east England. It includes several entities that are real breeds: Scotch Beff Shorthorn, Milking Shorthorn, Northern Dairy Shorthorn, Lincoln Red Shorthorn and Polled Shorthorn. The creators of this breed were the Colling brothers who, in 1783, began the selection starting from subjects of two local breeds, the Holderness and the Teeswater. The Scotch Beef Shorthorn is the historic Shorthorn. Later during the twentieth century the Milking Shorthorn was created, which is the Shorthorn with a dual aptitude and predominantly for milk. The Genealogical Book was established in 1822.
From this breed we recall that the Illawarra in Australia and the Swedish and Norwegian red breeds that have some ancestors from the Shorthorn are derived.

Morphology –
The Milking Shorthorn is a medium-sized breed; The adult cows have an average height of 140 cm and a weight of between 640 and 680 kg.
The coat color is variable from red, white and ubero (with red and white hairs) with different shades.
The musello is depigmented, of pink color.
The horns are short, elliptical in section, facing sideways and downwards.
The red and white coat color genes in the thoroughbred Milking Shorthorns are codominant, resulting in roan colouration.

Production aptitude –
The Milking Shorthorn, although dual-purpose, still retains good characteristics for meat production.
The average milk production is around 7,000 kg in an annual lactation of 305 days; the fat content is 3.8% and the protein content 3.3%.
Milk is the prevailing production, although largely inferior to that of the Frisona.
It is also a breed that is very suitable for grazing, with very few birth problems and also for high fertility levels. They are also quite long-lived cattle and they make good use of the availability of food from the pasture.