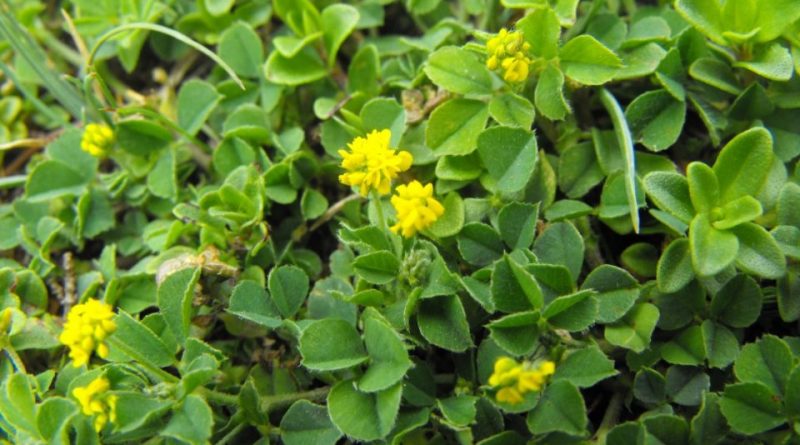 The black medick or wild clover (Medicago lupulina L.) is a herbaceous species belonging to the Fabaceae family.

Systematics –
From the systematic point of view it belongs to the Eukaryota Domain, United Plantae, Magnoliophyta Division, Magnoliopsida Class, Fabales Order, Fabaceae Family, Faboideae Subfamily, Trifolieae Tribe and then to the Medicago genus and the M. lupulina Species.

Etymology –
The term Medicago comes from Media, a historic geographical area occupied by Medes who occupied much of today’s central and western Iran south of the Caspian Sea, the territory from which Theophrastus believed the plant came. The specific epithet lupulina is the diminutive of lupus luppolo in Plinio: which therefore resembles a small hop.

Geographical Distribution and Habitat –
Black medick is a species with a Eurasian-sudeuropean distribution that today has become sub-cosmopolitan. It is found throughout Europe, northern Africa, the Near East and most of Asia, including India, China and Korea. It is naturalized in Central Asia, Japan, South Africa, Australia, New Zealand, the United States (including Hawaii and Alaska), Canada and much of South America.
It was probably cultivated for the first time in England in the mid-fifteenth century. It spread, as forage, in the rest of Europe between the eighteenth and nineteenth centuries. Although in a very reduced form, it is today cultivated, almost never alone, in almost all European countries.
This species is very common throughout Italy where it grows in disturbed environments, from the edges of roads to those of the woods, from the semi-natural prairies to ruderal vegetation, on neutral-basic soils, rich in nitrogen compounds, up to the mountain belt and sometimes even more high.
In Italy its use is limited to the constitution of mixtures for polyphite lawns. 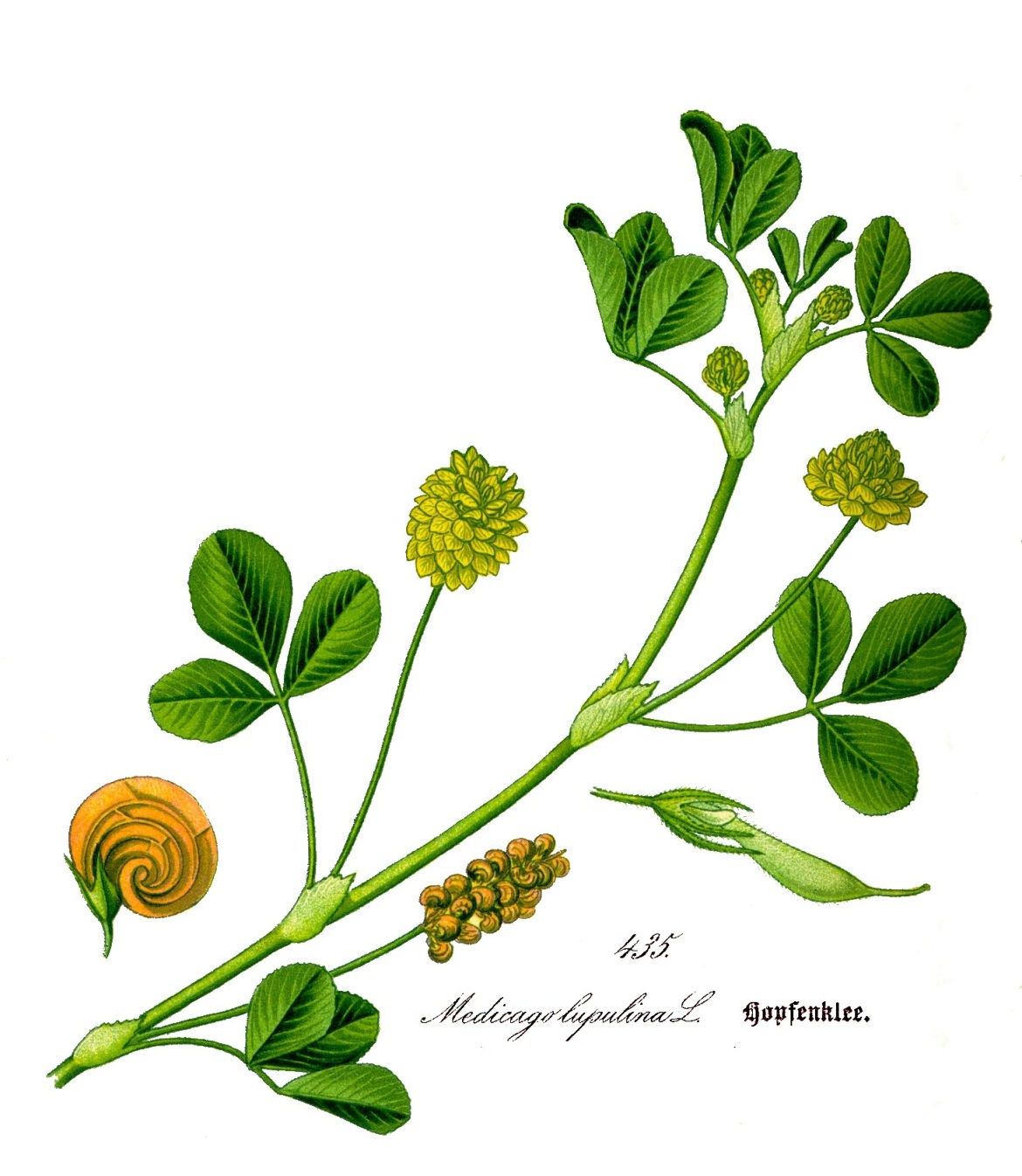 Description –
Medicago lupulina is a herbaceous species with a modest root system, represented by a rather thin taproot root with few branches and tubercles that form rather small nodules.
The stems are erect or semi-prostrated, thin, angular, with hair and more or less branched.
The leaves are trifoliate with the central one provided with a petiole longer than the two lateral ones. The basal leaves are usually longer petiolate than the apical ones.
It has an inflorescence that develops in an axillary position and is carried by a long and thin peduncle. This is initially globose, later it grows as the individual flowers develop. The inflorescence is composed of numerous yellow flowers of about 3 mm with a calyx equal to half the corolla of which only the flag is evident. The stamens are diadelfi, the ovary is monosperm and, when ripe, it turns into a spiral and turns black. The seeds are yellow, bright and rounded. The flowering period is between April and August.

Cultivation –
Black medick is a plant that grows in alkaline, neutral or, at the limit, slightly acid soils. However, it does not like arid or very humid soils and prefers deep, well-limestone soils. As for the climate, it seems to have more resistance than the medical one, which makes it cultivable, for example at higher altitudes.
The pure cultivation of lupoline is carried out exclusively for the production of the seed.
In fact this species becomes part of mixtures for polifita meadows in consociation with different grasses and legumes. It should also be borne in mind that Medica lupolina is characterized by considerable earliness and, therefore, when the lawn is mowed it has already reached a stage of advanced maturation and therefore gives a rather poor quality forage.
For these characteristics of marked precocity, the lupoline spontaneously re-seeding very easily and although it is of limited longevity (2-3 years), it remains indefinitely in the polyphite meadows.

Uses and Traditions –
Black medick is a plant that lends itself to grazing as it shows a good resistance to trampling and being characterized by a prompt spring vegetative recovery, it is able to provide an early grazing. In these conditions it is able, among other things, to contribute favorably to the quality of the forage. The content of digestible nutrients, which in hay is never very high, is instead on levels similar to those of alfalfa and clover if the use takes place at an early stage of development, before there is an excessive increase in fiber content.
Black medick can be confused with other plants that have similar leaves and small yellow flowers, such as Trifolium campestre, T. aureum, T. dubium and Oxalis stricta.
Medicago lupulina is a plant much visited by bees to produce honey.

Preparation Mode –
The black medick is a typically forage plant whereas today it has few uses for food because even the production of honey from its flowers is scarcely used.