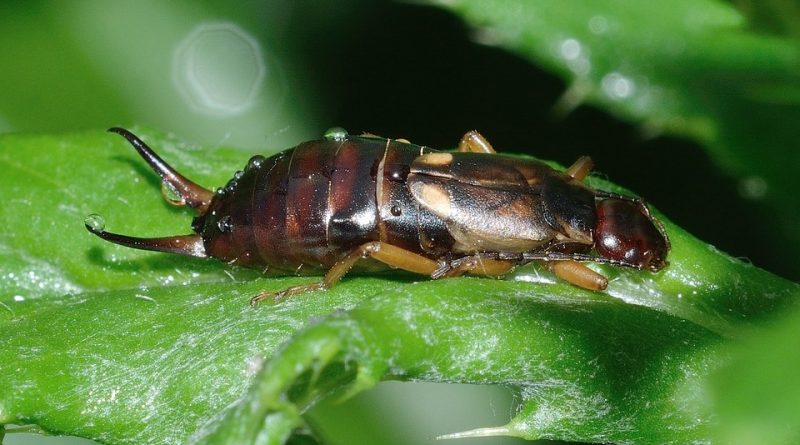 The European earwig (Forficula auricularia Linnaeus, 1758) is an insect of the Forficulidae family.

Geographical Distribution and Habitat –
The Forficula auricularia is an omnivorous insect, but mainly phytophagous, originating in Europe, where it has spread. At the beginning of the nineteenth century it was also introduced in North America and is now present in most of the American continent.

Morphology –
The European earwig is an insect with an elongated and flattened brownish shape, with a shield-shaped pronotum, two pairs of wings and a pair of cerci, between 10 and 15 mm long, hence the common name, which resembles a pliers or scissors. The male sexual forceps are very strong and broad at the base with crenulated teeth. Female pincers, on the other hand, have an average length of about 3 mm and are less robust and straight.
Cerci have a triple function: they are, in fact, used both during mating, for food purposes, and for self-defense purposes. Furthermore the females have tegmine approximately 2 mm long. Male specimens with asymmetric forceps are called hermaphrodites due to their similarity to females.
It has a second lobed tarsal segment that extends distally below the third. The antennas are made up of a number of segments that can vary between 11 and 14. The buccal apparatus is masticatory.

Attitude and biological cycle –
The females of the Forficula auricularia spend the winter in nests dug in the soil where they lay their eggs. The eggs are very resistant to both high and very low temperatures.
The female produces on average 50 eggs after which she enters a state of hibernation. In spring it wakes up during the hatching of the eggs.
The nymphs are born already in full winter and, with the first warm, they are dispersed in the environment. The new adults appear in late spring.
European specimens survive in cold and wet environments and their ideal climate temperature is around 24 ° C. Their diffusion in a given year is linked to factors such as temperature, speed and the origin of the wind. For this reason the presence of earwigs in the European continent can be envisaged on the basis of meteorological analyzes.
This insect, in certain situations, can cause damage to crops and foodstuffs and, due to its polyphagia, can attack herbaceous crops in open fields, vegetables, ornamental trees and fruit trees; generally, however, the density of the populations is such as to consider it as a secondary pest. Often he acts as a predator, playing the role of auxiliary insect in many crops. It also frequents anthropized environments and can often be found inside the houses in the countryside.

Ecological Role –
The Forficula auricularia owes its name to the mistaken conviction that this insect has the habit of entering the human ear.
It is instead, as mentioned, an insect with gregarious habits and, only occasionally, can cause damage to horticultural crops, tobacco, flowers, fruits, in whose cracks it is often repaired. More frequent can be the damages to the cherry tree that, generally, it is interested in the fruits next to the maturation.
For normal population density levels this insect is not the object of targeted defense practices. Poor mobility and the buccal bladder apparatus make it vulnerable to the action of broad-spectrum insecticides active by contact and by ingestion, the use of which, however, must be cautious due to the considerable impact on useful arthrophalous.
The gregariousness of this insect can instead cause infestations in homes and their interiors. Possible increases in the presence of this insect can be easily resized by treating the exterior with insecticides authorized for civil use, such as some pyrethroids (permethrin, etc.).