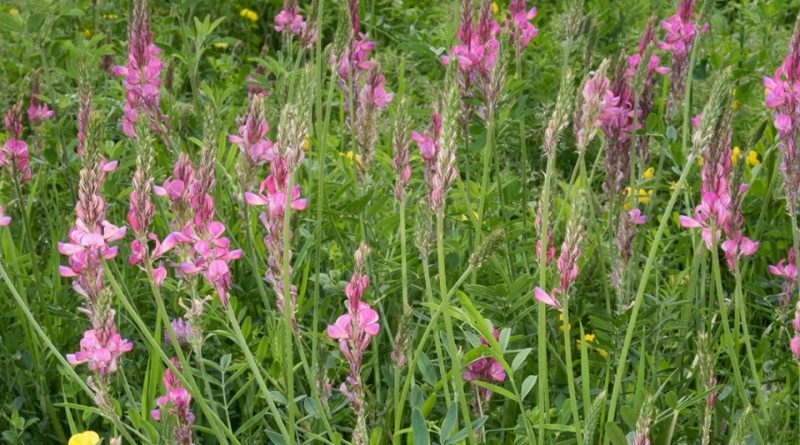 The Common sainfoin (Onobrychis viciifolia Scop.) Is a herbaceous species belonging to the Fabaceae family.

Systematics –
From the systematic point of view it belongs to the Eukaryota Domain, United Plantae, Magnoliophyta Division, Magnoliopsida Class, Fabales Order, Fabaceae Family, Faboideae Subfamily and therefore to the Genus Onobrychis and to the Species O. viciifolia.

Etymology –
The term Onobrychis comes from the Greek ὄνος ónos, donkey and from βρΰκω brýco graze, devour: plant eaten by donkeys. The specific epithet viciifolia derives from the genus Vicia veccia, a genus of the fabaceae and from folium leaf: therefore with leaves similar to the vetch.

Geographical Distribution and Habitat –
The common sainfoin is a heliophilous and mesophilic legume whose origin is controversial; probably it is an irano-turanic species, especially in the past widely cultivated as forage and therefore probably introduced, at least in the regions of central-northern Italy, now present in all regions of Italy.
Its habitat is that of dry and calcareous meadows and pastures, uncultivated, road edges, on substrates rich in nutritive elements, from 0 to 2200 m s.l.m. 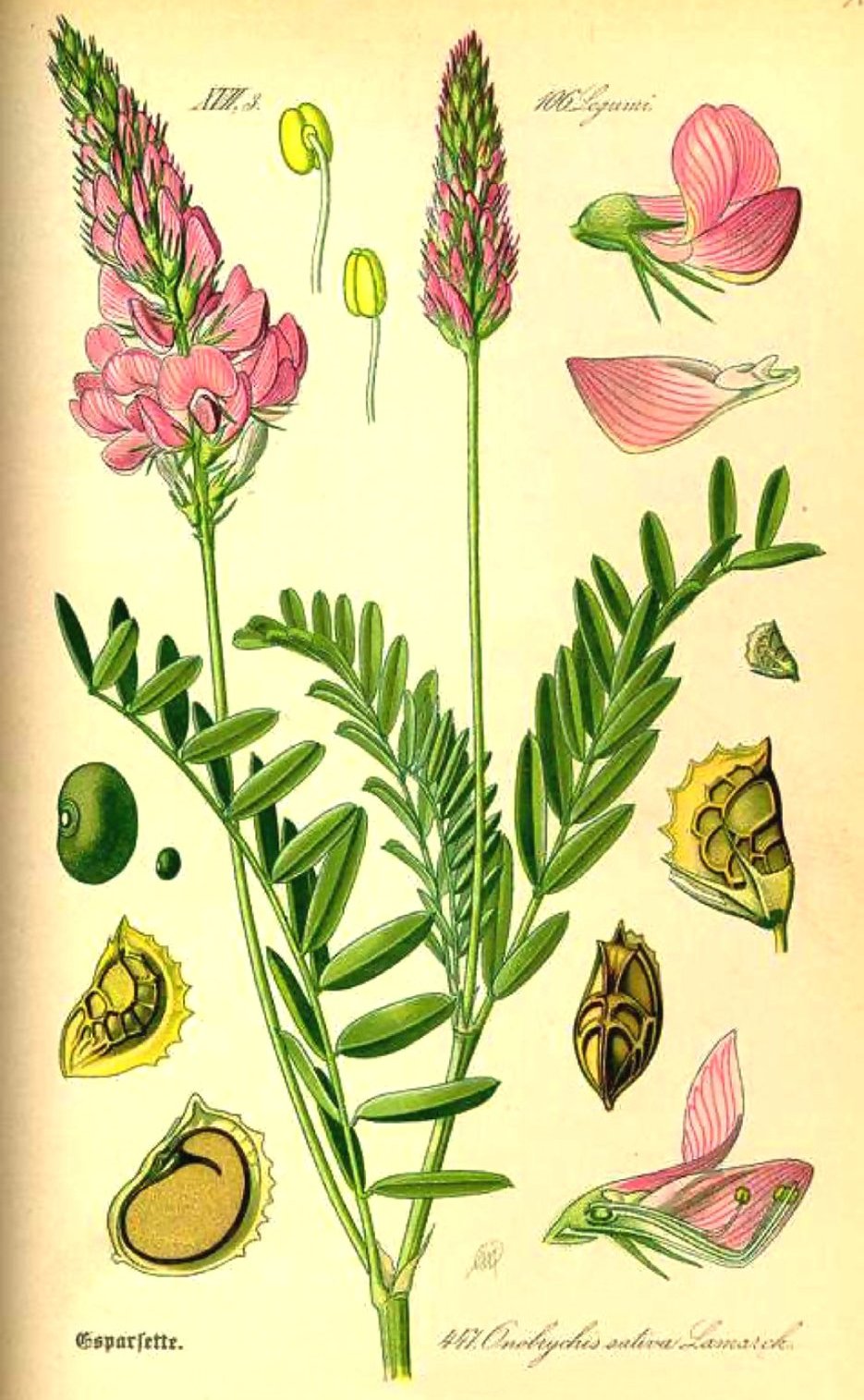 Description –
Onobrychis viciifolia is a perennial herbaceous species, 40-70 cm tall, with a robust taprooty root rich in numerous and large root tubercles.
The stems are simple or little branched, erect-ascending, striated and fistulose between the internodes, pubescent and often red at the base, subglabs upwards.
The leaves are imparipinnate, with the lower petiolate and the sessile superior; the lamina presents 7-14 pairs of segments ± sessile, pubescent, the lower elliptic, the upper ones narrower; connate, scariose, often reddish stipules.
The inflorescence is an unbranched axillary raceme, long pedunculated, of a rosy color with floral bracts as long as the calyx tube.
The cup is gamosepal with long hairs appressate or ± erect-patenti, divided into 5 lanceolate-lesiniform teeth of 3-4 mm, 2-3 times longer than the tube.
The corolla is 10-14 mm large, typically papilionaceous, of an intense pink color with purple veins, rarely white; the banner subequal to the hull, wide, with the apex turned to the back.
Presents ovary and diadelfi stamens.
The fruit is a legume of 5-8 mm, indehiscent (camara), suborbicular and compressed, pubescent, alveolar and crested, with 6-8 spines of 0.2-0.8 (1) mm on the dorsal margin. It generally contains only one reniform brown-greenish seed.
The pollination, almost exclusively crossed, is ensured by the bees (the flowers are strongly nectariferous). The anthesis is between May and August.

Cultivation –
For the cultivation of the common sainfoin we must consider that this plant has little aptitude to throw back after the 1st cut which is therefore the one that gives the bulk of the production. It is a species that resists cold and especially drought. It adapts better than alfalfa to lean, loose, calcareous, pebbly lands.
From an agronomic point of view the common sainfoin is an excellent plant that improves 2-3 years in cultivation and is well placed between two cereals. It is often associated with alfalfa in permanent consociation, or in temporary consociation with wheat or other similar cereal, on which it is sown in bulatura.
For the sowing of this plant, normally in the south it proceeds in autumn using 120 kg / ha of dressed seed, in the middle it is made at the end of winter (March) with 60 kg / ha of bare seed, more ready to germinate.

Uses and Traditions –
In past times, both among the Greeks and the Romans, the common sainfoin was not known as a forage plant, Dioscorides probably evoked another species of Onobrychis: Onobrychis caput-galli, spontaneous throughout the Mediterranean basin, but not cultivated. The Onobrychis viciifolia has entered the ranks of agrarian plants, relatively recently: in the fifteenth century it spread in the south of France, in Italy and in the countries of central Europe, in the seventeenth century.
The common sainfoin is appreciated by animals both as hay and green; it has high nutritional qualities, it grows in difficult soils such as limestone, drought, warm and permeable. It withstands temperature changes, certainly more than alfalfa, tolerates snow, resists drought better than clovers and alternate grass, but is sensitive to excesses of moisture in the soil, even temporary. The development is slow: if sown in spring it provides an abundant cut in the second year of cultivation; if sown in autumn by a good cut in the following 2 years.
The forage of Onobrychis viciifolia is of good palatability, digestibility and non-meteorizing. The yields are around 20-25 t / ha of rather watery grass (80% humidity and more), corresponding to about 4-5 t / ha of hay.
Sainfoin hay cut at the beginning of flowering has the following composition: s.s. 85%, crude proteins 15-16% (su s.s.), U.F. 0.55 per Kg of s.s.
The seed is produced in the lupinellai that have reached the last year of life.
Currently the only varieties registered in the National Register are “Vala” and “Zeus”.
This fodder plant frequently escaped cultivation, so it is also found in the spontaneous state. Having a high food value, it has spread in the formation of alternating lawns of short duration both in the plains and in the mountains.
The common sainfoin is pollinated by bees for both nectar and pollen; it is perhaps the legume most sought by bees for concentrated nectar (42-55% of sugars). This plant produces a very light, almost white, honey with a delicate, often slightly fruity taste.
Unfortunately the honey of this essence has undergone a constant decline in production in the last few decades due to the gradual abandonment of the stables and the depopulation of the mountains, where the sainfoin was cultivated as a forage.

Preparation Mode –
The common sainfoin is a legume of good use as a fodder plant for animal feed. It finds a good application as a melliferous plant but its use is gradually decreasing due to the abandonment of the areas where once it was practiced the breeding of alpine and more inaccessible areas. Honey has a delicate taste that can be used directly or for the preparation of desserts and other preparations.