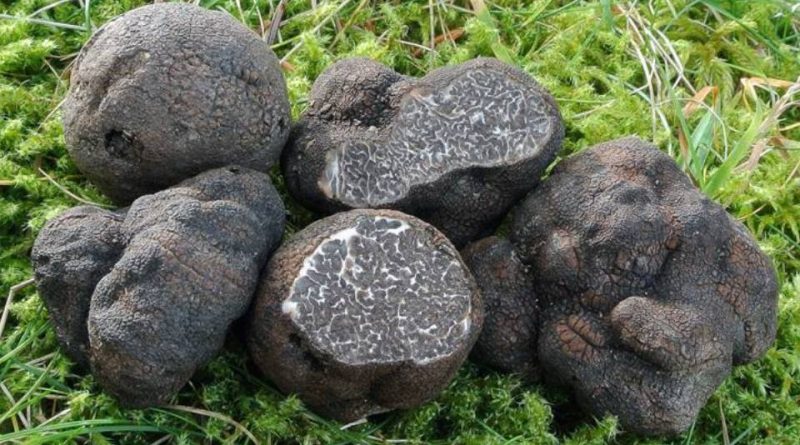 The smooth black truffle (Tuber macrosporum Vittad., 1831) is an underground fungus of the Tuberaceae family.

Systematics –
From the systematic point of view it belongs to the Eukaryota Domain, Fungi Kingdom, Ascomycota Division, Pezizomycotina Subdivision, Pezizomycetes Class, Pezizales Order, Tuberaceae Family and therefore to the Genus Tuber and to the T. macrosporum Species.

Etymology –
The term Tuber comes from tuber tuber, truffle in Pliny and other authors. The specific epithet macrosporum derives from the Greek μακρόϛ macrós grande, lungo and from σπορα spora; for large spores.
The name Black smooth truffle is due to the characteristic surface that presents very close warts that give the peridium a smooth appearance.

Geographical Distribution and Habitat –
The smooth black truffle is an underground species growing in the same habitat as the T. magnatum with respect to which it has greater tolerance to drought. We find it in the woods from the sea level up to the mountain, above all on downy oak, common oak, Turkey oak, lime, poplar, willow, hornbeam and hazel. Fruits in the period from September to December, producing more specimens in the same hole. 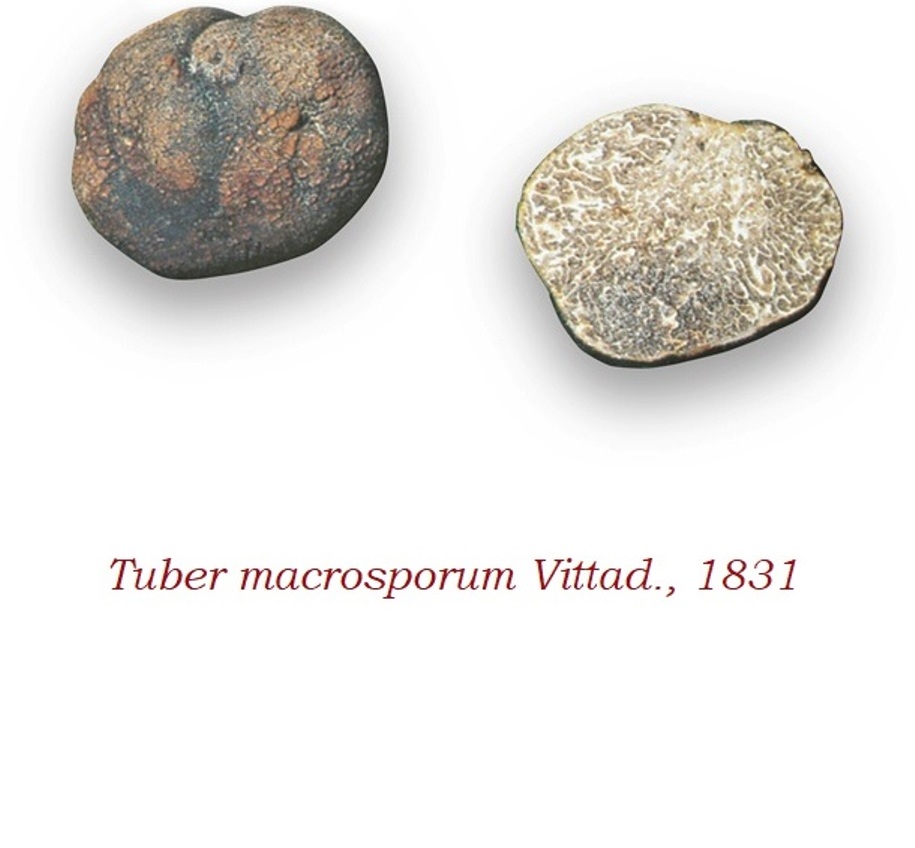 Recognition –
The Tuber macrosporum is recognized for having a rather globular or sub-globular fruiting body of 1 – 6 cm in diameter.
It presents a warty peridium, with oscillating colouration between reddish-brown and blackish; sometimes it has rusty spots, with polygonal warts, flattened and irregular.
The gleba is white-brownish and then brown-rusty, with numerous white veins, rather broad that on contact with the air turn pale-brown.
It has an aromatic odor, which tastes slightly like garlic and vaguely reminiscent of the prized white truffle (T. magnatum).
At the microscope we can observe ellipsoidal spores, brown in mass, covered by an irregular mesh network of 40-80 x 30-55 (60) µm; the size of the spores, higher than the other truffles (for which macrosporum).
The axes are sub-globular, sub-pedunculated, of 90-140 x 70-85 (100) µm, which contain from 1 to 5 spores.

Cultivation –
Tuber macrosporum normally grows in the same habitat as the Tuber magnatum, with respect to which, however, it tolerates drought the most, while it is never found in the Tuber melanosporum environments. This truffle that bears fruit from September to December has the characteristic of producing, in the same hole, numerous specimens of variable sizes, but still always quite small.

Uses and Traditions –
The Tuber macrosporum is a typically autumnal truffle, its maturation period is slightly anticipated by a couple of decades compared to that of the white truffle; this concomitance, combined with the modest quantities that are put on the market and the constant productivity over the years, make that the smooth black truffle is not commercialized and valued as a species in itself but is mixed with other black truffles, usually hooked, which depreciate it also because in autumn the market is monopolized by white.
There are those who even consider it inedible as well as not marketable, and discard it.
The smooth black truffle should be considered a good truffle – excellent edibility.

Preparation Mode –
Unlike white, the smooth black truffle is more persistent and powerful both on the nose and on the palate and, in some preparations of the few local housewives who use it in their dishes, it is even indicated to consume it after eliminating the outer rind for facilitate digestibility.