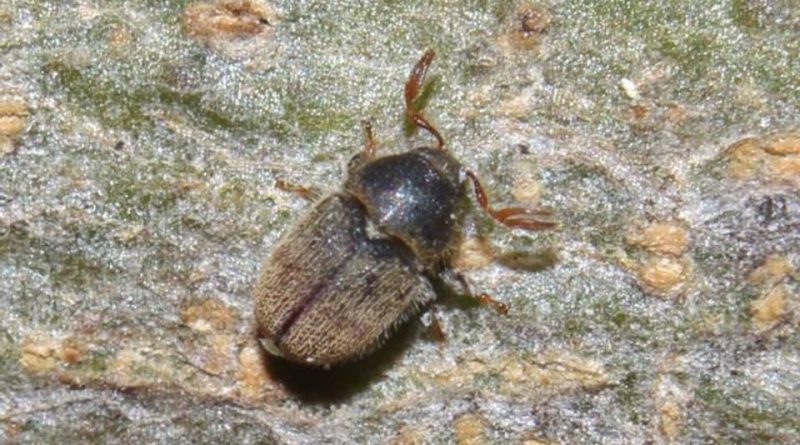 Geographical Distribution and Habitat –
The Fleotribo is an insect that lives above all in the Mediterranean and in other temperate areas and its area of ​​diffusion corresponds with that of the cultivation of the olive tree.

Morphology –
The Phloeotribus scarabaeoides is recognized in the various forms as follows:
– The adult looks like a small oval weevil about 2 mm long, with dark color and with two darker spots on each elitra. The antennae flabelli fere with distal part of reddish-brown color. The body is covered with a very dense hairiness.
– The egg is ivory in color, oval of 0.8 mm x 0.5 mm.
– The larva is apode and arched, of a yellowish white color that passes through 5 larval stages and with a 3.5 mm dimension when fully developed.
– The pupa, whose stage is preceded by a preninfal period of inactivity, is whitish in color, but gradually becomes yellowish brown. This is located in a nymphal loggia packed by the old larva at the end of the tunnel.

Attitude and biological cycle –
The Fleotribo hibernates as an adult in the tunnels, in the plant but sometimes it can also winter as a larva. In spring the adults begin to come out and begin to feed themselves, digging feeding galleries, at the armpit of the branches.
Subsequently the galleries are abandoned and the adults are carried on the perished branches and / or on the pruning waste, for the reproduction; the females drill a hole through the bark, enter between the rind and the sapwood and dig two transverse tunnels in which the eggs are laid.
The newly hatched larvae emerge and dig, each, a tunnel perpendicular to the maternal one; after about a month and a half the larva has reached maturity and, at the end of its gallery, it becomes wild.
The period of flicker of the adults, which pierce the bark, is between May and June.
The first generation is generally followed by two others with flickering of adults towards August and then in autumn; the latter are destined to winter.
In general the Fleotribo turns 3 generations a year but in favorable weather conditions they can even reach 4.

Ecological Role –
The Fleotribo is present on the Olive and more rarely on Frassino, Lillà and other host plants.
The adults of the first generation are born and swarm at the beginning of spring on other olive trees, where they generally practice feeding bites at the base of fruit bunches, more rarely than a young branch. In both cases, the attacked elements dry out and die.
The greatest damage is in fact caused by adults who have xylophagous habits; they dig tunnels in the armpit of the twigs (feed tunnels). The attacked branches grow stunted, produce less fruit and often dry up. The presence of the galleries on the Olive also facilitates the presence of the Tripid of the Olive (Liothrips oleae) which finds, in these, a shelter for wintering and oviposition.
The fight against Phloeotribus scarabaeoides is mainly agronomic; it uses practices that tend to reduce the potential for infestation.
In general it is necessary to operate as follows:
– elimination of the affected branches that are burned;
– use of “bait branches”; these are the residues of pruning that are left in the olive grove to attract females during oviposition.
The female eggs on these “bait branches” the branches will then have to be burned within the first half of May before the flicker of the adults.
For more details on the fight against Phloeotribus scarabaeoides, see the following sheet.