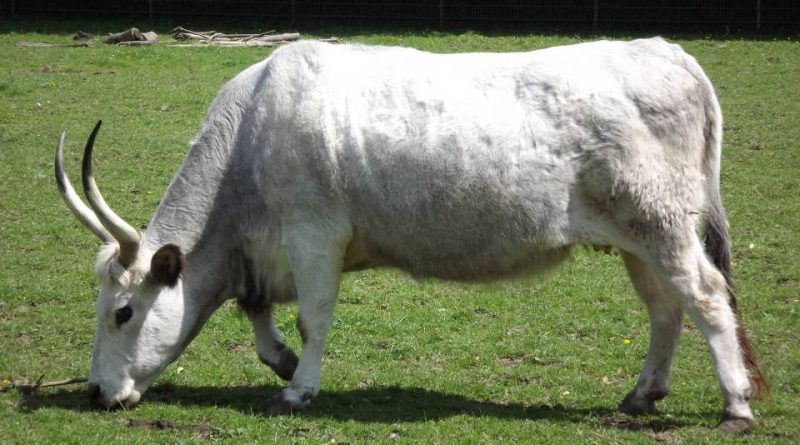 The Hungarian Gray, also known as the Hungarian of the Steppes, is a bovine breed (Bos taurus Linnaeus, 1758) originally from Hungary, with a dual aptitude for the production of meat and milk.

Origins and History –
The Hungarian Gray breed probably arrived from the east (or from the Balkans), up to the Hungarian plains, with Hungarian immigration in the 9th century. In the Middle Ages and later until the last century this breed was used as a draft animal. Later from 1861 it was bred for good meat production, being bred for many European markets. Nowadays the cows of the Hungarian Gray breed are mainly kept as tourist attractions in the Hortobágy National Park and in other Hungarian national parks. Small herds can be found elsewhere, such as Bocfölde, in western Hungary. These herds act as genetic banks, due to their greater resistance to cattle diseases affecting livestock in intensive farming.
The number of animals raised, over time, has been decreasing to arrive in 1975 when there were only 300 animals raised in two herds. Since then the number has been increasing thanks to the recovery programs of this breed by the Hungarian Government.

Morphology –
This breed is recognized for having a white-silver colored coat tending to ash gray. In bulls you can find black hair around the eyes and on the shoulders. The calves, on the other hand, are fromentino and become gray at about three months.
The muzzle is black and the horns long and upward (up to 80 cm in the bulls) and have very strong claws.
They are medium-high size animals with a very developed front.
The bulls reach a height of 145 to 155 cm and a weight ranging from 800 to 900 kg, cows from 135 to 140 cm and from 500 to 600 kg.

Production aptitude –
The Hungarian Gray is a predominantly meat breed with a reasonable production of milk (2,000 kg / lactation).
These cattle are characterized by a remarkable resistance to diseases, very robust, long-lived and with poor needs; cows are also well prepared for easy delivery.