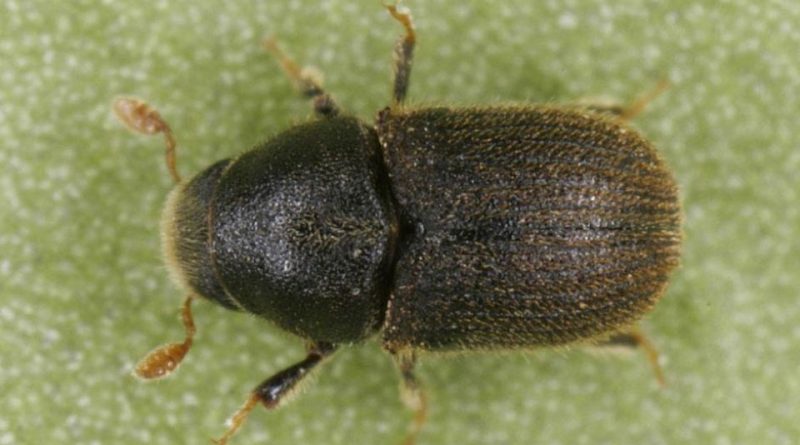 Geographical Distribution and Habitat –
The Phloeosinus thujae is a small beetle that lives on plants such as Cypresses, Thuje, Ginepri, Sequoias and others. It lives and reproduces in almost all of continental Europe and in Great Britain. It is a species that is present on many continents mainly because it is transported with material and various wooden artefacts.

Morphology –
The Fleosino of tuja is a small beetle, of 2-3 mm, blackish-brown in color with a cylindrical body and short antennae and pronounced final articles.

Attitude and biological cycle –
II Phloeosinus thujae hibernates as a larva, in prolific galleries. In the period between April and May, then the adults appear who mate and the females begin to dig the prolific tunnels, inside the woody organs. II Phloeosinus thujae makes only one generation a year.

Ecological Role –
II Phloeosinus thujae lives and reproduces on various host plants, including Cypresses, Thuje, Ginepri, Sequoias and others.
This insect attacks mainly dead plants or in a state of physiological and vegetative weakening. The damage is caused by all the mobile stages that dig tunnels inside the woody organs, such as the trunk, the branches and the branches.
Adults dig two types of galleries:
– maturation tunnels on the young branches, in particular when they are placed on other branches or on the armpit of the shoots;
– prolific galleries in the cortical layers, between bark and wood, of the stem or of the large branches.
Also the larvae dig tunnels that are under rind, in the large woody organs, damaging the conductive tissues and strongly weakening the affected plants.
The presence of this insect can be noticed through the numerous fading holes of the adults outside the woody organs.
The containment of the populations of these insects is not easy. A provision can be to eliminate the plants or parts of these wastes, burning them before the period of April – May.
The fight against these phytophagous plants could be chemical but it presents considerable difficulties; in any case, being secondary phytophagous, it is good to keep the plants in good vegetative and phytosanitary condition, to avoid or limit the attacks of these bark beetles.
In any case the only time in which it is possible to carry out treatments occurs at the exit of the adults from the maturation tunnels, in order to dig the prolific galleries. It is better to use endotherapic products because it is possible to reach, in the small herbaceous shoots, also the interior, where there may be phytophagous plants.