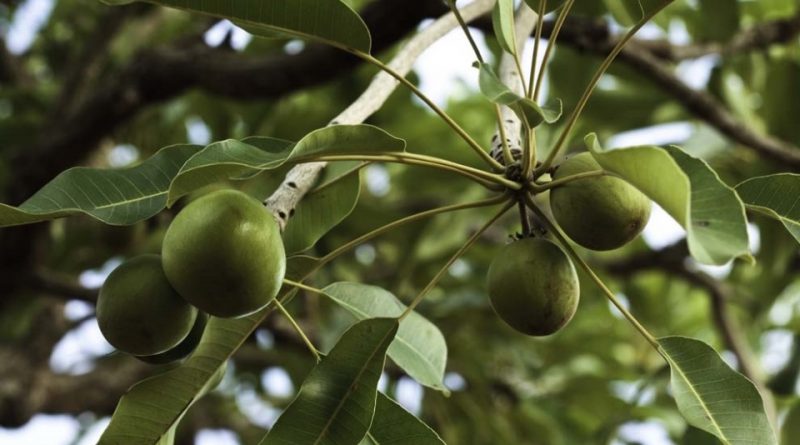 Shea or butter tree (Vitellaria paradoxa CF Gaertn.) Is an arboreal species of the Sapotaceae family.

Systematics –
From the systematic point of view it belongs to the Eukaryota Domain, United Plantae, Magnoliophyta Division, Magnoliopsida Class, Ebenales Order, Sapotaceae Family and therefore to the Genus Vitellaria and to the Species V. paradoxa.
The term Butyrospermum parkii is synonymous.

Etymology –
The term Vitellaria comes from vitéllus, egg yolk and the suffix -aria indicating a connection: due to the yellowish color of the flowers. The specific epithet paradoxa derives from the Greek παράδοξος parádoxos (from παρά pará against and from δόξα dóxa Opinion) against all expectations, extraordinary, paradoxical, strange, out of the ordinary: for the difficulty of a correct classification due to the presence of contradictory characters.

Geographical Distribution and Habitat –
Shea is a species native to Africa and is widespread in Benin, Burkina Faso, Cameroon, Chad, Republic of the Congo and the Democratic Republic of the Congo, Ivory Coast, Ethiopia, Ghana, Guinea, Mali, Niger, Nigeria, Senegal, Sudan, South Sudan, Togo and Uganda.
This plant was introduced in Honduras where it is commonly known as tango.
It is also considered as a vulnerable species by IUCN, as wild specimens are excessively exploited for economic purposes. 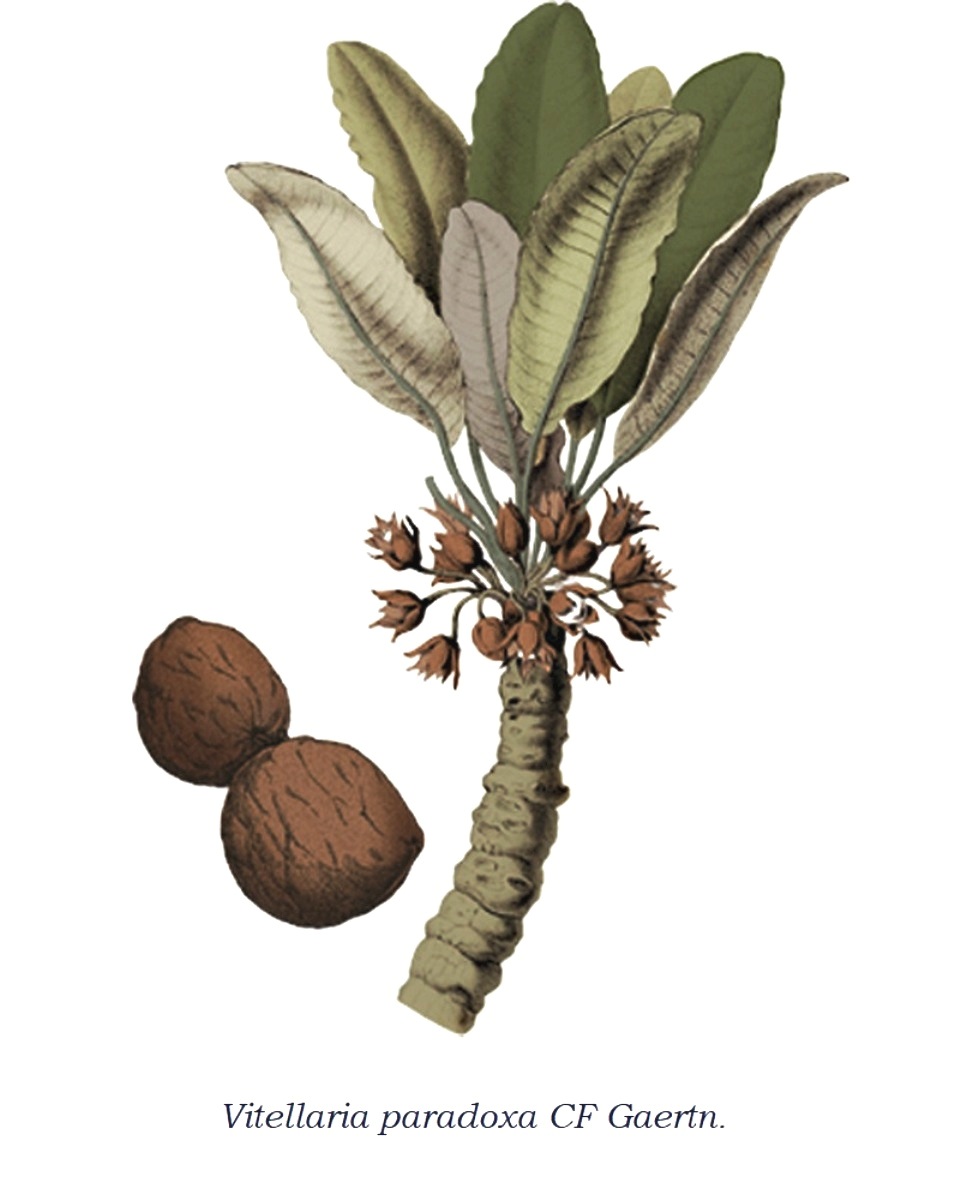 Description –
The Vitellaria paradoxa is a tree that can reach a height between 10 and 15 meters and with a trunk that can reach one meter in diameter.
The trunk has a very thick bark that serves as a protection against the high temperatures found in the savannah. The branches are stocky and also have a strong bark.
The leaves are tufted on the branches and have an elongated shape and provided with a petiole on average between 5 and 15 cm long; the color of these is red tending to rust in youth, developing they acquire a color that tends to dark green and can increase their dimensions of length and width respectively from 15 to 25 cm and from 4 to 7 cm.
The flowering period is from December to March and the flowers are green with shades of yellow and pleasant fragrance.

Cultivation –
The cultivation of the intensive or programmed Karité tree is practically impossible as shea grows spontaneously only in the places of origin. For this reason, the Karité tree, also called the plant of youth, has for many years been considered a vulnerable species by IUCN because the wild specimens are in danger of extinction because they are exploited to the maximum for economic purposes.
The harvest of the fruits of the tree of youth is made by indigenous women from June to July until September.
The stones or seeds, manually freed from the pulp that covers them, are selected, dried in the sun for several days.
Subsequently the seeds are crushed, crushed and ground to obtain a thick and oily paste with a buttery consistency which, depending on the content of carotenoids, may have an ivory-white or an intense yellow color.
The smell of raw Shea butter resembles that of chocolate and that obtained by roasting can be slightly smoked.
The content and composition of the vegetable oils contained in the seeds also changes according to the period of harvest, the variety, the environmental conditions and the processing.

Uses and Traditions –
Shea is a plant common to the spontaneous state especially in the countries of the central area from Benin to Chad from Congo to Nigeria, from Senegal to Sudan, from Togo to Uganda. Today the Karité tree is also cultivated in Central America with the greatest diffusion in Honduras where it is known as Tango.
The Vitellaria paradoxa is a very long-lived tree that can live up to 200 years even if it is characterized by a very slow growth and reaches an average height of about 12 meters, giving life to an expanded foliage, rich in leaves, variously branched from the base supported by a very large trunk that in a developed specimen can reach a diameter of one meter.
The fruits or nuts of the Karité, similar to prunes or Argan fruits, have an inner meaty covering covered with a smooth, glossy and green color. The fruits take 5 to 6 months to reach maturity and are produced only by specimens that are at least 15 years old. The maximum productivity of the plant goes from 50 to 100 years and on average from each tree of the Shea it produces 20-25 Kg of fruits from which are obtained from 3 to 4 kg of walnuts.
The seeds are woody and oily kernels of brown-rust color, rich in a fatty substance from which the precious butter famous all over the world is obtained for its pleasant fragrance and its sweetish taste. The seeds do not have a good germination capacity.
Shea butter, unmistakable for its slightly yellow or green color and for its beneficial properties, is used all over the world for the preparation of many beauty products, the treatment of colds and as a condiment in local cuisine.
Indigenous women have always used it to protect their skin from sunlight, wind and the erosive action of salt.
In the places of origin all parts of the butter tree are used for various purposes:
– waste or residues from processing as livestock feed;
– the fat is also used to make soaps and candles;
– the latex that comes out of the bark and leaves is used as a glue and as a base for chewing gum;
– the wood, very hard and compact, is instead widely used in local craftsmanship for the production of kitchen utensils and the construction of various objects for the home.
It is interesting to know that in ancient times in the places of origin, the natives mixed Shea oil with the earth and with this sort of dough similar to stucco or lime they covered walls and walls.
In addition to the traditional, substantially manual method, oil can be extracted either mechanically by cold compression or chemical solvent.

Preparation Mode –
Shea butter is also used in the kitchen. Shea butter naturally emits a vigorous smell, which not everyone appreciates. For this reason it is often found for sale with the addition of other essences, which dampen its intensity. Even the taste is particularly aromatic. Shea butter, for the bravest, can be used to replace table oil. It is used together with cocoa butter to create special chocolates, and is fairly present in many varieties of margarine. In Africa, shea butter is used as a condiment, to fry pancakes, and to prepare many other products for the international market.
In Sub-Saharan African countries, where shea butter is still produced today following ancient traditions, this substance is considered very precious and is traditionally used also in the kitchen; in fact in Burkina Faso «it is the basis for cooking Tô, the traditional dish par excellence, a millet polenta, sorghum or corn. Accompanied by vegetable sauces prepared with cassava leaves or baobab »