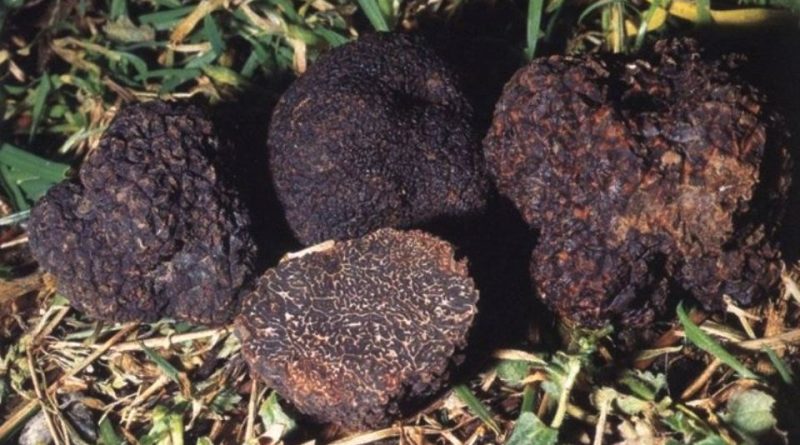 The summer black truffle or Scorzone (Tuber aestivum (Wulfen) Spreng. (1827)) is an ascomycete mushroom of the Tuberaceae family.

Systematics –
From the systematic point of view it belongs to the Eukaryota Domain, Fungi Kingdom, Ascomycota Division, Pezizomycotina Subdivision, Pezizomycetes Class, Pezizales Order, Tuberaceae Family and therefore to the Genus Tuber and to the Species T. aestivum.

Etymology –
The term Tuber comes from túber tubero, the name of the truffle in Pliny and other authors. The specific epithet aestivum has been attributed to it due to the characteristic of this fungus of bearing fruit in the summer period.

Geographical Distribution and Habitat –
The Tuber aestivum is a symbiotic, hypogean fungus that grows in association with broad-leaved trees; it can grow on a wide range of soils, even if it prefers calcium-magnesium and drained soils, rich in fine and coarse granulations.
It develops in the woods from sea level up to about 1000 meters of altitude and in Europe it is particularly widespread in Italy, especially in Umbria and Tuscany and in southern France and in Aragon but its range goes from Italy to Spain, up to the States Baltic countries and Russia; to the south it is reported in some North African states and in Turkey.
The fruiting period is the summer one. 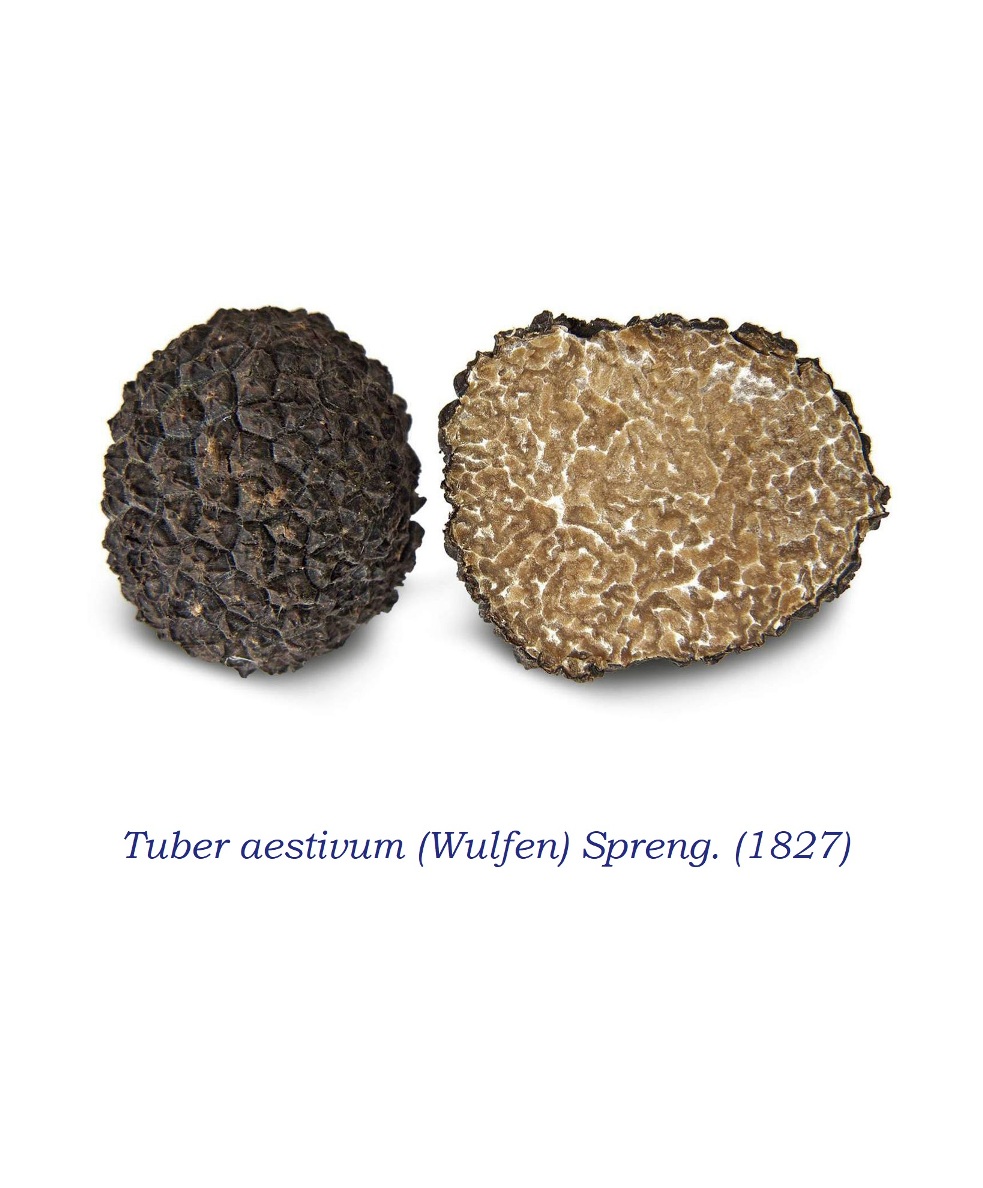 Recognition –
The summer black truffle is recognized by a tuberous fruiting body of 1-5 cm in diameter, rarely larger, sometimes kidney-shaped, with a cavity or basal depression; the peridium is black or brownish in color, with roughness to protruding pyramidal warts, normally small to 2-4 mm in width. This is reddish when young to then darken during ripening.
The gleba is nutty in color, more or less yellowish in mature specimens, often even lighter in color; this is furrowed by numerous whitish veins, more or less thin, branched and anastomosed.
It has a delicate and pleasant smell, slightly fungal and an aromatic taste, reminiscent of porcini mushrooms.
At the microscope, spores of a dark yellow color in mass, roundish or suboval, of 18-41 x 14-32 µm, irregularly reticulated or alveolus, with very short papillae and few spines are noted.
The axes are slightly pedunculant or globose, of 60-95 x 50-80 µm, mono or tetrasporic and rarely esasporici.

Cultivation –
For the growth of the Summer Truffle or Scorzone remember that it is an underground fungus that develops over a large amount of soils of different geological origins, since the growth area of ​​this tuber is very vast. The soils on which they grow have considerable variability; they are however always characterized by an alkaline or sub-alkaline pH and by a good limestone content, preferably balanced texture and soft airy structure. Unlike the Tuber melanosporum Vittad. Vegeta also in soils with higher contents of heavy and tough clay, also rich in humus; instead it fears water stagnation. From the chemical point of view, the soils must be well endowed with potassium, very poor in phosphorus, sufficiently equipped with calcium.
From an ecological point of view, the Tuber aestivum replaces Tuber melanosporum at altitudes above 800-1,000 meters s.l.m .; tolerates summer drought better. The collection of the best quality truffles is included in the August-September period. Truffles harvested in May-June have lower organoleptic qualities.
The symbiont plants on which it grows are: at high altitudes it is in symbiosis with downy oak, oak, beech, hornbeam, hazel. At lower altitudes it is in symbiosis with the English, oak, holm oak, black hornbeam, pine, hazel. The non-symbiont plants, which however are often found in the truffle grounds are: common ash, flowering ash, field maple, blackthorn, hawthorn, dogwood, housewood, juniper.
It is certainly one of the easiest truffles for artificial cultivation.

Uses and Traditions –
The Tuber aestivum, although well known among truffle connoisseurs, is one of the least prized species of its kind, although it is a good edible mushroom.
As for the similarities to other varieties and species, any confusion with other blackish brown truffles is avoidable taking into account the large, hard and raised warts that adorn the peridium of this species. The odors and the color of the gleba are different, for example, in Tuber melanosporum Vittadini 1831 (prized truffle from Norcia) it has a decidedly darker maturity and a more intense aroma. Tuber mesentericum Vittadini 1831, which is certainly the most similar, is distinguished by having slightly smaller warts, very pronounced basal cavity (reniform aspect), different odor, unpleasant as iodoform. For other cases it is certainly the microscopic analysis that can dispel any doubt.
As regards the commercial value of the black summer truffle, it is emphasized that, despite having a medium-low market price, the productivity of the truffle grounds allows satisfactory economic results to be achieved. Used extensively by the processing industry. Requested from the fresh market, being the only summer-ripening truffle.
It is mature and is harvested during the summer and is identified by research with trained dogs.
The edibility of this truffle is inferior compared to others of the genus Tuber as, for example, the prized Black Truffle.

Preparation Mode –
The summer black truffle can still be considered an edible mushroom, good, but not particularly sought after in the truffle field, as it requires cooking in order to fully appreciate its qualities.