The Eurasian coot, also known as the common coot (Fulica atra Linnaeus, 1758) is a water bird that belongs to the Rallidae family.

Geographical Distribution and Habitat –
Fulica atra is a bird that lives in a very large area ranging from central Europe, eastern Europe and northern Africa to Siberia and Australia. Its presence is quite numerous also in Italy.
It is a species mostly sedentary and only those living in the coldest regions migrate, in winter, towards the south. Coots prefer to live in calm ponds, lakes, wet lands and slowly flowing waters with many aquatic plants and a belt of marsh reeds. 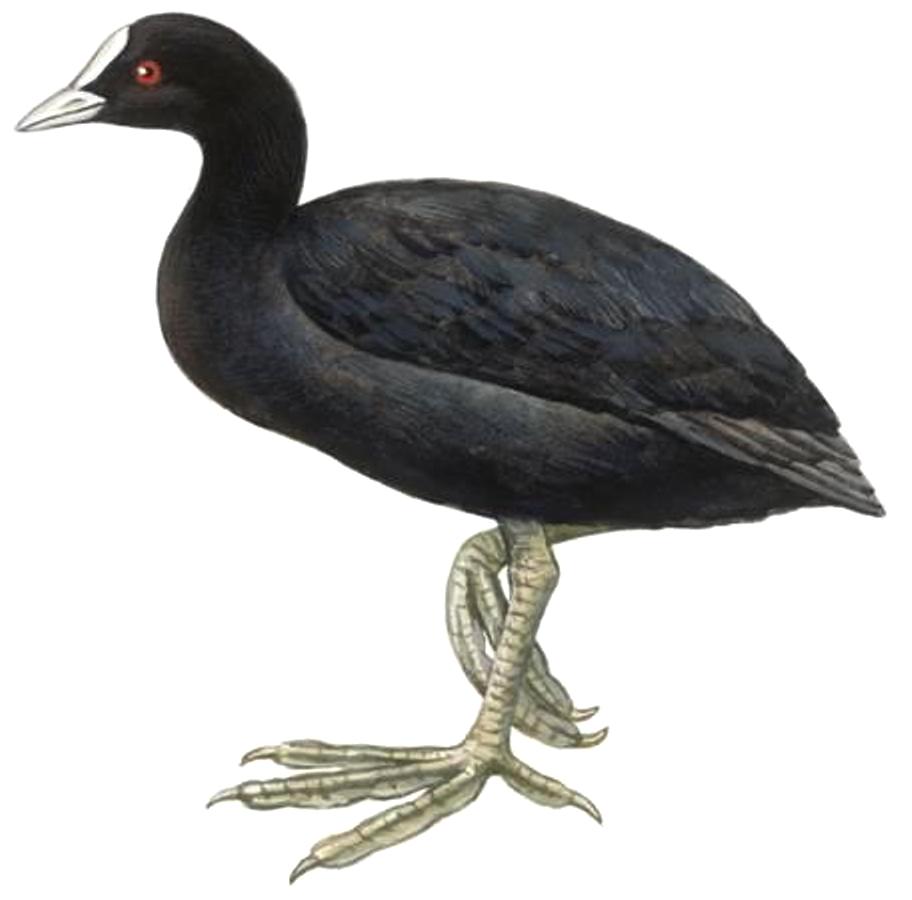 Description –
The coot is recognized for having a plumage of black-blue color, with white beak and the presence of a white spot on the forehead, called frontal shield, which takes up the light color of the beak. The eyes are red and the gray-green legs end with long lobed fingers, the result of the process of adaptation to the aquatic environments. The coots are in fact excellent swimmers exploiting their strong legs and membranes between the fingers. They reach a length of about 38 cm. Male and female are quite similar: while the males are recognizable by the slightly larger spot and reach up to 600 grams in weight, the females weigh up to 800 grams.

Biology –
As said the coots are able swimmers and divers, while on land they move awkwardly. They have a safe but heavy flight. They are timid and shrewd birds of character. Threatened by danger, they all gather together, placing themselves on the water next to each other, and they beat the water with their legs to splash it against the enemy.
The coots feed mainly on aquatic insects, small fish, crustaceans, molluscs and aquatic plant shoots.
At the time of reproduction they build in the reeds a very bizarre nest in the thick of the aquatic vegetation. The nest consists of a voluminous round construction, floating, fixed to the aquatic plants so that it is not dragged by the current; it is made with canes lined with softer vegetables. The females lay from 3 to 12 eggs, yellowish, which hatch, helped by the males, for about 21 days.

Ecological Role –
Fulica atra is a species that finds its ideal habitat in calm ponds, moist soils and slowly flowing waters, with many aquatic plants and marsh reeds. In these environments, individuals can find an abundance of food resources, with particular regard to plants and molluscs. In any case, the species is omnivorous, and food is collected based on seasonal availability. For example, in summer the coots typically feed on reeds, algae, grasses, aquatic plants and organic residues as well as small fish, frogs, molluscs, insects and insect larvae; in winter they do not disdain the remains of bread and waste.
For their lively character the coots clash loudly, often bickering between them. The fights are not a prerogative of the male and it often happens to see also females that face each other; in any case, the struggles usually take place between individuals of the same sex. In some circumstances the coots can also unite against predators, such as the Marsh Harrier and the Fox: if threatened, in fact, they move noisily together, among a thousand splashes of water.