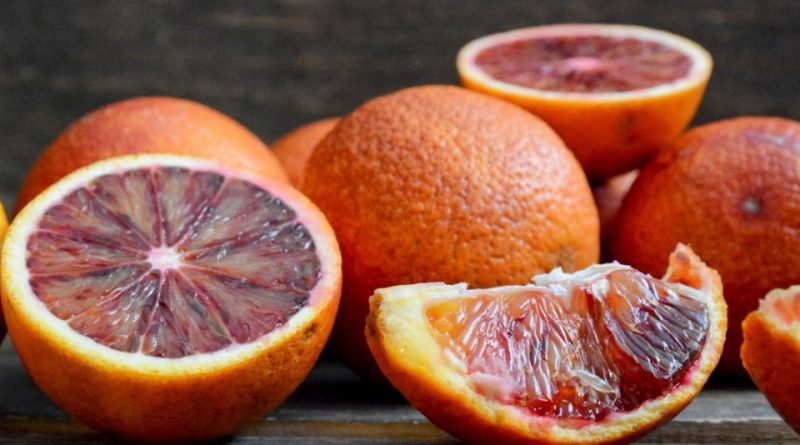 The definition of Sicilian Blood Orange (PGI) refers to some varieties of oranges with a Protected Geographical Indication (PGI) that are grown in some centers in the provinces of Catania, Enna and Syracuse.

Origins and History –
The history of Sicilian red oranges arises with the arrival, presumably directly from China, from which the primitive genetic nucleus from which the current citrus fruits are derived is differentiated. This is evidenced by the oldest documents in which pigmented oranges are mentioned.
It is given for sure that it was the Arabs who introduced the oranges to Asia Minor, Egypt, North Africa and Europe.
In particular, in Sicily, during the Arab domination (IX-XI century AD) bitter oranges and lemons were planted in so-called gardens, a term still used today, evocative of the ornamental function that initially the citrus groves had on the island.
In the second half of the 1800s cultivations in Sicily increased and towards the end of that century they began to be planted no longer in the hilly slopes or in the flat areas, but in the special citrus groves.
The largest investments in the new citrus cultivation took place in the Catania and Syracuse areas and it was these areas that became the favorite of the orange with red or pigmented pulp, consolidating this vocation during the 1900s.
We are therefore at the beginning of the 20th century when the cultivation of orange conquers the plain of Catania, above all following the reclamation of the marshlands; new varieties of red orange such as Sanguinello, Moro and Tarocco begin to appear.
In no other region of the Mediterranean area and of the American continent the pigmented cultivars have succeeded in producing fruits with the valuable qualities that distinguish the Sicilian red oranges, such as the intense coloring and the balanced relationship between sugars and acids.
The rigid night temperatures and the luminous intensity of the beautiful winter days are climatic characteristics of that part of Eastern Sicily particularly suited to the production of red oranges. The abundant amount of insolation allows the formation of high levels of sugars, essential for the formation of flavor, made tasty by the modest amount of precipitation.

Production Mode –
As far as the environmental and cultivation conditions of the orange groves destined to the production of the Arancia Rossa di Sicilia PGI are concerned, these must be the traditional ones of the area. The fruit ripening period varies from mid-December to April, depending on the variety. In particular, the Tarocco is harvested in the period from December to April, until the second week of May; the Moro variety is instead placed in the shorter period of December-February. Finally, the Sanguinello variety is harvested from February to April. The fruits are picked by hand with the help of special scissors that cut the stalk. After harvesting, no processing of the fruit is allowed, including deverdizzazione or sverditura, a procedure that, by treatment with gas, allows the early fruits to reach the typical color for marketing.
Irrigation systems can be either for micro-irrigation or, more and more rarely, for basins and superficial flow.

Gastronomic Use –
The Arancia Rossa di Sicilia PGI must be kept in a cool and dry place. It is an excellent fruit if consumed fresh, peeled “alive” or by eliminating with a small knife both the white part close to the bark and the skin that separates the various segments. It can also be used in the preparation of juices, jams, salads, sauces and liqueurs. With the peel you can prepare candied fruit and sweets. The Arancia Rossa di Sicilia PGI in cooking is used to flavor birds, pork and white fish.