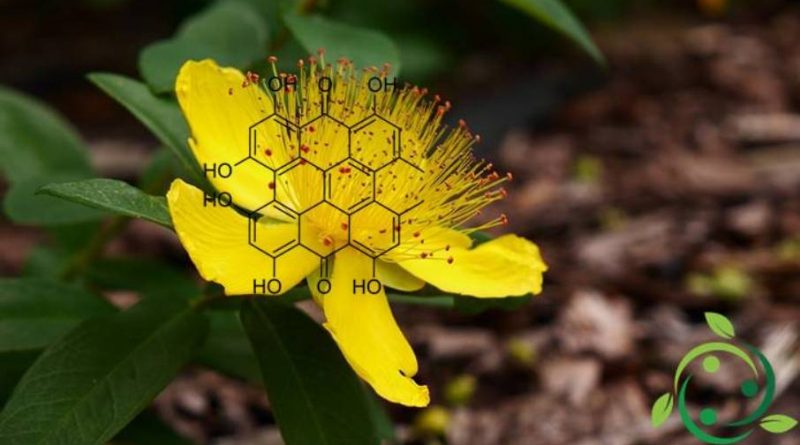 Hypericin, whose term in the official IUPAC nomenclature is: 1,3,4,6,8,13-hexahydroxy-10,11-dimethylphenantro [1,10,9,8-opqra] perilen-7,14-dione it is a naphthodiantrone, anthraquinone derivative, whose brute or molecular formula is: C30H16O8.
Hypericin is found naturally in plants of the genus Hypericum. This compound is found in all plant organs except the roots and was isolated from the species Hypericum hirsutum, for the first time by Brockmann et al. in 1939.
The hypericin isolated, in its natural state, is a solid compound with a dark blue color, which can be crystallized using pyridine with a solution of hydrochloric acid in methanol. Hypericin is insoluble in water and decomposes at a temperature of 320 ° C.
Hypericin is a compound with an acid pH which, in the presence of organic bases, tends to form salts which, unlike the original compound, are soluble in common polar solvents.
Ipericina, which is the active ingredient of St. John’s Wort (Hypericum perforatum), has antidepressant, antibacterial and antiviral properties, and the ability to promote wound healing.

Hypericin inhibits the enzyme monoamine oxidase (MAO), responsible for the deactivation of various mediators of the central nervous system, has an relevance for GABA receptors and induces an arrest in the reuptake of serotonin which, almost certainly, is the fundamental device Hypericum antidepressant and is also the neurotransmitter that regulates mood, with consequent increase in outcomes related to the usability of serotonin.
At the same time, hypericin also inhibits the catechol-O-methyltransferase (COMT) enzyme, having the same effect.
In this sense the hypericum increases the nocturnal secretion of melatonin; it also contains some tannins with an antidiarrhotic effect and some flavonoids with a diuretic effect.
In recent years, numerous studies have been conducted on the possible utilities of hypericum, and hypericin, in the medical field. Other studies are underway to evaluate some antitumor effects of this molecule.