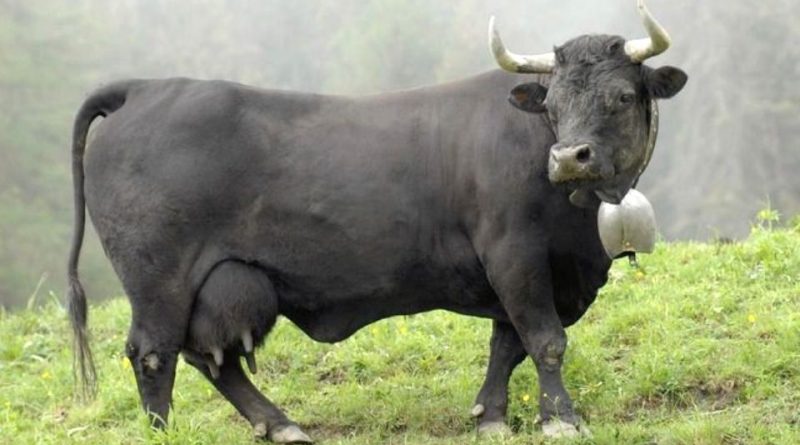 The Herens is a bovine breed (Bos taurus Linnaeus, 1758) native to the Swiss region of Val d’Hérens, with a dual aptitude for the production of meat and milk.

Geographical and area distribution –
The Herens cattle breed (Eringer in German) is a breed of cattle that takes its name from the Swiss region of Val d’Hérens and is bred in the Valais canton in the area between Bringen and Martigny, in the Val d’Aosta and in the Chamonix region in France.

Origins and History –
This breed takes its name from the homonymous district in which it originated and where it has been bred for many years, so much so that it is believed that it was already present at the time of the Romans. This breed is one of the 11 breeds that adhere to the European Federation of Alpine System Breeds (Abondance-France; Grigio Alpina-Italy; Herens-Switzerland; Hinterwälder-Germany; Pinzgauer-Austria; Rendena-Italy; Tarentaise-France; Tiroler Grauvieh- Austria; Valdostana-Italy; Vordelwälder-Germany; Vosgienne-France).
The genetic characteristics of the Herens breed, although they distinguish it from other Swiss breeds obviously make us think of old joining so much that it is similar to the Zillertal Tuxer breed in Austria.
Herens cattle in the past were often crossed with other cattle breeds in the Alpine region. These include, for example, the Tuxer, the Evolène and Pustertaler-Barà which have inbreeding with Herens.
However, it comes to 1884 when a reproduction standard was introduced for this old breed. Furthermore, in 1917 the breeders’ association was founded.
Unfortunately since the 1960s this population has progressively decreased so much that in 2000 the population was about 13,500 animals. Breed bulls are bred at an insemination station in the town of Neuchâtel in Switzerland.

Morphology –
Herens cattle are one of the smallest cattle breeds in Europe.
This breed is characterized by having a coat of color that can vary from dark red to brown or black.
The newborn calves are red with a dark stripe along the back, with colors that are reversed as they grow.
These cattle also have a short, broad head with a concave front line. The animals are very muscular, with a light but solid skeleton and with both sexes having very pronounced black horns on the tip and short limbs, very strong black claws and black pigmented mucous membranes.
The bulls generally reach a height of 125-134 cm, with a weight of 650-700 kg. The cows reach 118-128 cm and 500-600 kg.
They also have a lively and warlike temperament.

Production aptitude –
The Herens is a dual-purpose breed, with prevalence for milk production. Cows produce around 3,200 kg of milk a year.
It is a rustic, long-lived, fertile breed and excellent grazing machine with very strong hooves and limbs that adapt to the inaccessible areas of the alpine altitudes.
A well-known feature of the Herens breed is the high aggressiveness of its females. In spring, cows and heifers are trained to fight against each other, in five weight categories, in a traditional “cow fight” of these lands. The winners are then sold even at high prices.
Today the struggles with cows have become a major tourist attraction in the Valais.